Decorative Details Make All the Difference in This Laundry Room Reno

Show off your linens! Line the room with Shaker pegs! 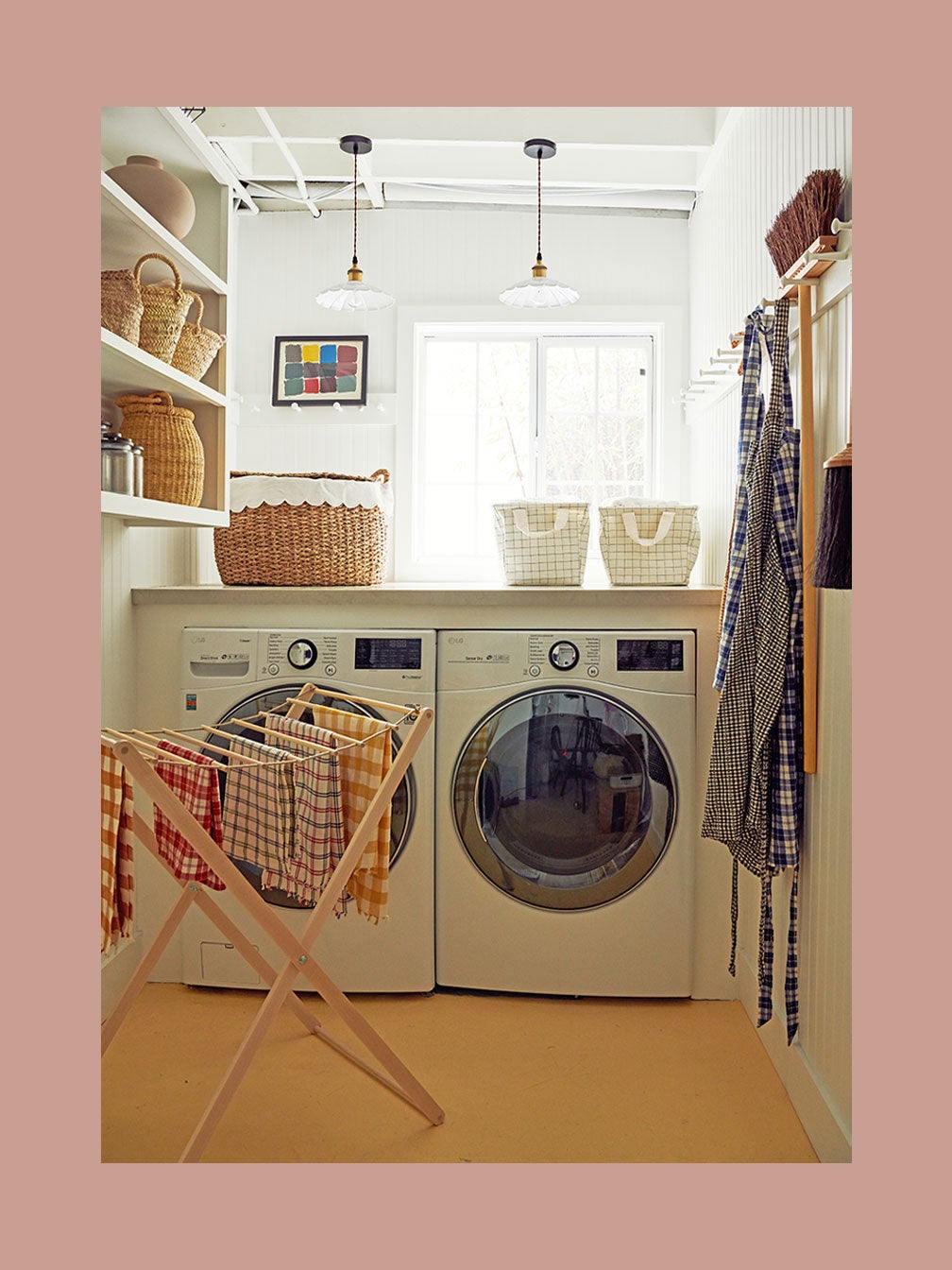 When it came to renovating her 1,950-square-foot mid-century home in California’s Laurel Canyon, textile designer Heather Taylor needed to make the most of every awkward nook and dark corner. So she tapped Los Angeles–based interior designer Sarah Shetter, who helped create a textured, airy environment that Taylor could then layer in her signature traditional-with-a-twist fabrics (think: earthy ginghams and cheery botanicals). With young children in the mix (6-year-old Scarlett and 3-year-old Marigold), Taylor was especially focused on maximizing the functionality of utilitarian areas, too—including the laundry room. Prior to Shetter tackling the space, it had been closed off, without much natural light allowed to flow in, thanks to an extra wall that formed an open closet. But by reshuffling the layout and installing some effective storage options, Shetter was able to transition it into a bright space in which time spent doing household chores flies by.

“We work with a lot of creative people who have a strong opinion about what they like and don’t like,” says Shetter. “It was actually a really easy collaboration because we both came up with ideas, and [Heather] would often defer to us in a way I thought was very generous, saying, ‘Okay, you guys are the ultimate professionals. If you think that’s right, let’s do it.’ We’d trust her in terms of colors and prints and things she has a keen eye for, too.” Here’s how they did it.

Before Anything Else, Outline the End Goals

Determining where the washer and dryer should go was first on Shetter’s list, working backward from there. “We asked Heather how she needed the room to operate,” she explains. As might be expected with a textile designer who has her own sizable collection of table linens and bedding—as well as being in a family of four—big loads of laundry is a given, so space to hang things up to dry was a must. By rotating the machines to sit under the window, it opened up a bigger area to have a hamper or baskets. “Otherwise you’re pinched behind the walls,” says Shetter.

Find the Light and Let It Shine

Before reorganizing the layout of the room, the washer and dryer were placed along another wall, leaving a narrow passageway that closed off a lot of the natural light pouring through the window. Once the two machines were repositioned, Shetter worked to add more ambient glow. “Instead of something too utilitarian, like those recessed can lights, we hung two pendant lamps for the same cost,” notes Shetter. “Now there’s something that looks nice even when they’re not turned on.”

Get Creative With Storage Beyond Bulky Cabinets

Devising storage solutions that wouldn’t take up too much of the already limited square footage meant thinking outside closed cabinets and freeing up as much floor space as possible. After replacing painted drywall with sleeker wood panel walls, Shetter mounted Shaker pegs around the perimeter of the nook and replaced a corner closet with a few high shelves to hold cleaning supplies and detergent, tucked away in wicker baskets. Now Taylor can dry linens and towels and hang brooms, aprons, and other household essentials in a tidy display.

Creating a welcoming environment with decorative elements not related to the immediate tasks at hand, like washing or folding, doesn’t need to distract from a room’s efficiency. For Shetter, placing a tonal vase on a high shelf, leaning an art print on a back wall’s pegs, or (Taylor’s favorite) keeping a small arrangement of fresh flowers brings a personal touch without getting in the way. “I don’t think you want to clutter everything up with a ton of objects, but it makes a big difference and helps it become a spot you actually want to be in,” says Shetter. “There’s no reason you can’t hang art in a laundry room. If it’s nice to look at, why not?”

Outside the laundry room itself, Taylor stores all her neatly folded clothes, sheets, and linens in a closet. According to Shetter, its contents were too great not to show, and the doors were just getting in the way of the view. “When we were doing the original scout of the house, I said, ‘Let’s take them off.’ There was so much beautiful stuff inside,” she recalls. She installed floating shelves to properly display everything in the open. “We made the most of it,” says Shetter, who could be describing the laundry room project as a whole.