The European-inspired feature is wolfhound-friendly. 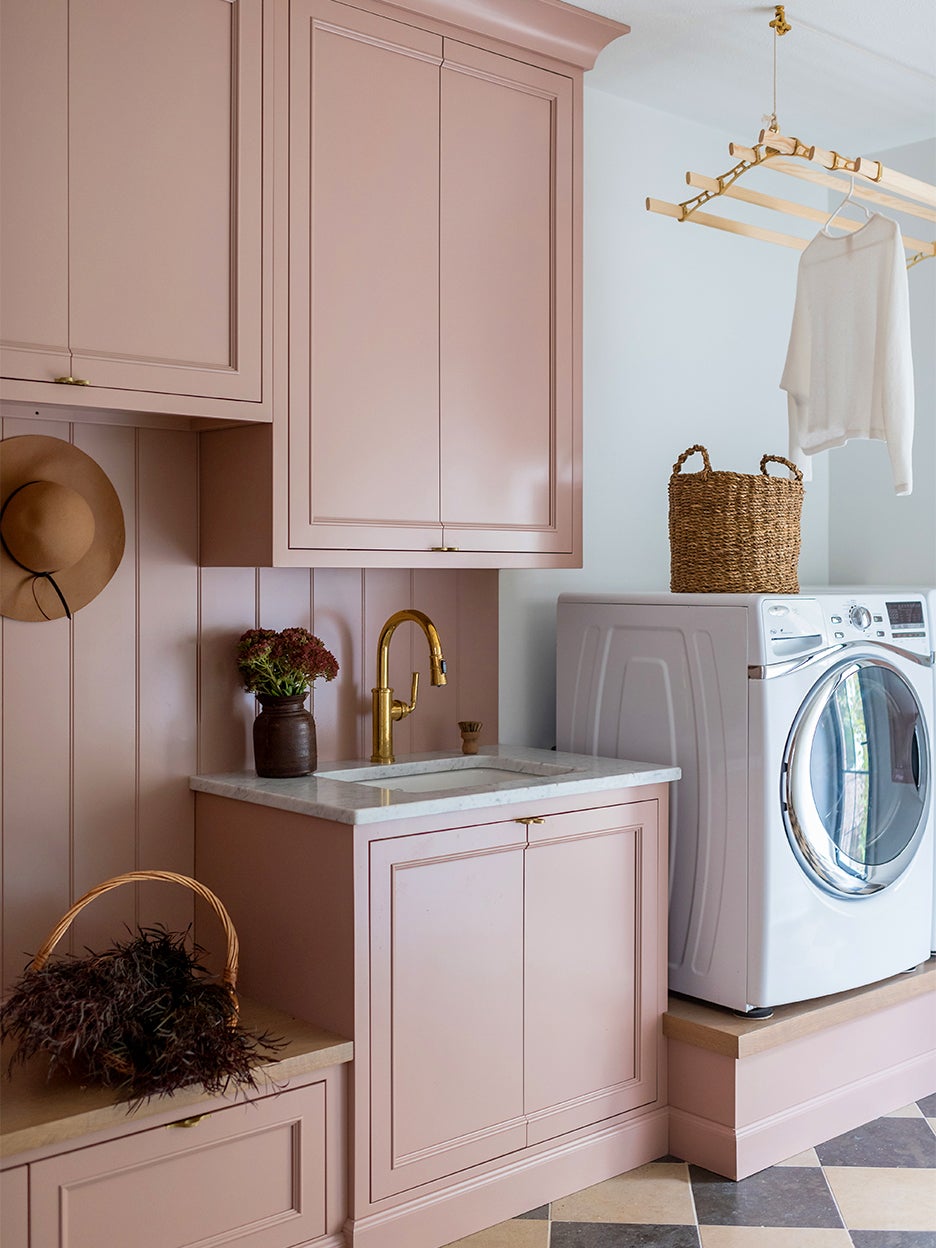 Usually mudrooms are designed with kids top of mind (dirty rain boots, stray mittens, backpacks—the works). But for Whitney Parkinson’s Carmel, Indiana–based clients, an Irish wolfhound named Argos and a Great Dane named Francis took priority. “They’re essentially the size of small horses,” says the designer. The task at hand was to create a joint mudroom-laundry space that was functional for the young family and comfortable for their four-legged companions, who would be spending a lot of their time trotting in and out of there.

Step one was expanding the room’s footprint slightly. Parkinson ate into the nearby kitchen pantry, bringing the space to a total of 117 square feet. From there she drew on her clients’ love of Scandinavian and British design for inspiration. “I treat laundry rooms a lot like powder rooms,” she says. “They’re places where you can really experiment, because they’re not super-public spaces. It’s just this little surprise.” 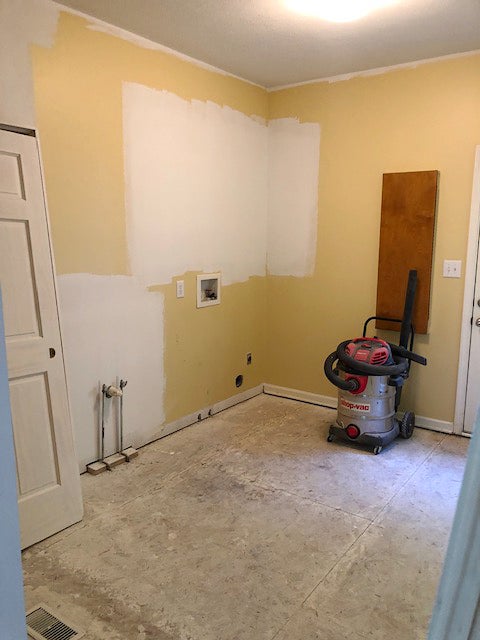 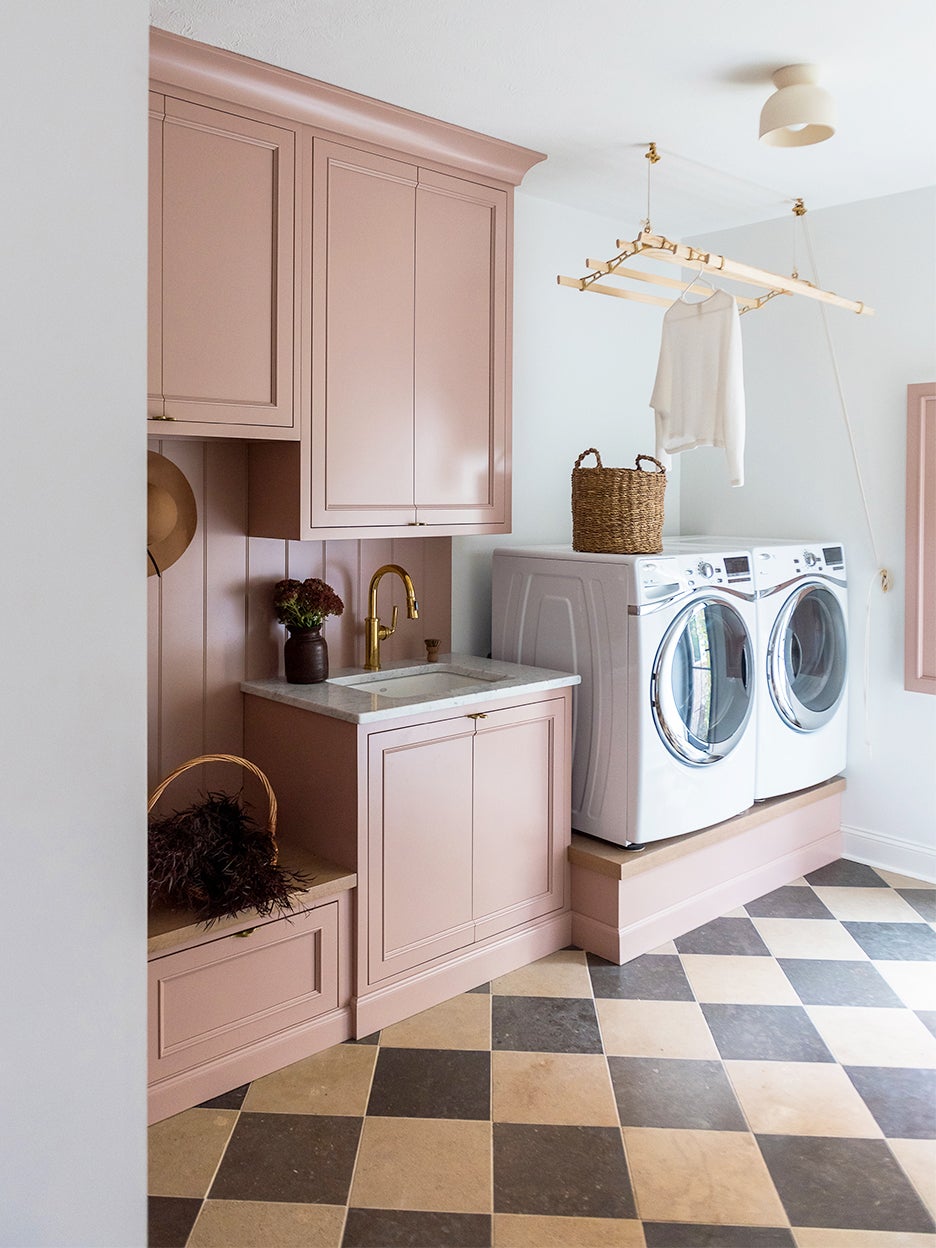 The floor had to be paw-proof, but that didn’t mean it couldn’t also be a statement feature. Parkinson opted for two tones of limestone (one charcoal, one tan) and mixed them to create a checkered pattern. The material shows wear and tear over time, but the patina makes it look better, explains the designer. “It’s a very European feature,” she says. “It just elevates the space.” There’s no door separating the space from the adjacent kitchen, so attractiveness was key.

Go High and Low With Your Cabinets

In addition to detergent, bulky winter gear also lives there. “It’s cold in Indiana, so storage should serve all the seasons,” she says. The cabinet directly above the Carrara marble–lined sink is for laundry products, while all the other uppers hold gloves, scarves, and coats.

“I would say half of my clients want their shoes exposed for easy access, while the others don’t want to see them,” says Parkinson. The Carmel clients were in the latter group, so she lined the white oak bench (which is stained, so it won’t scratch) with drawers.

Another very European edition are the wood-paneled walls (no, that isn’t your typical shiplap). Parkinson went with V boards, which are usually 6 to 8 inches wide, rather than the standard 2 to 3.

Originally the plan was to go with Farrow & Ball’s popular Dead Salmon hue for the cabinetry and walls, but the color proved to be unpredictable in the west-facing room. “Sometimes it looks brown; other times really pink,” explains Parkinson. Sherwin-Williams’s Interface Tan is much tamer. The super-simple brass finger pulls, which Parkinson’s fabricator recessed into the tops of the doors, allow the walls to sing.

Up Your Laundry Game

Pulling clothes out of the front-load washer and dryer isn’t a back-breaking experience thanks to the raised pedestal, which the designer had custom made to match the cabinetry style and color. “Most appliance manufacturers make their own, but they’re not very attractive at all,” she says. The suspended drying rack from DeVol is another bright solution: Clothes dry faster when they’re higher up, and it takes away the need for a fold-up one, freeing up room for Argos and Francis to roam.