We Transformed an Old Porch Into a Laundry Room for $6K 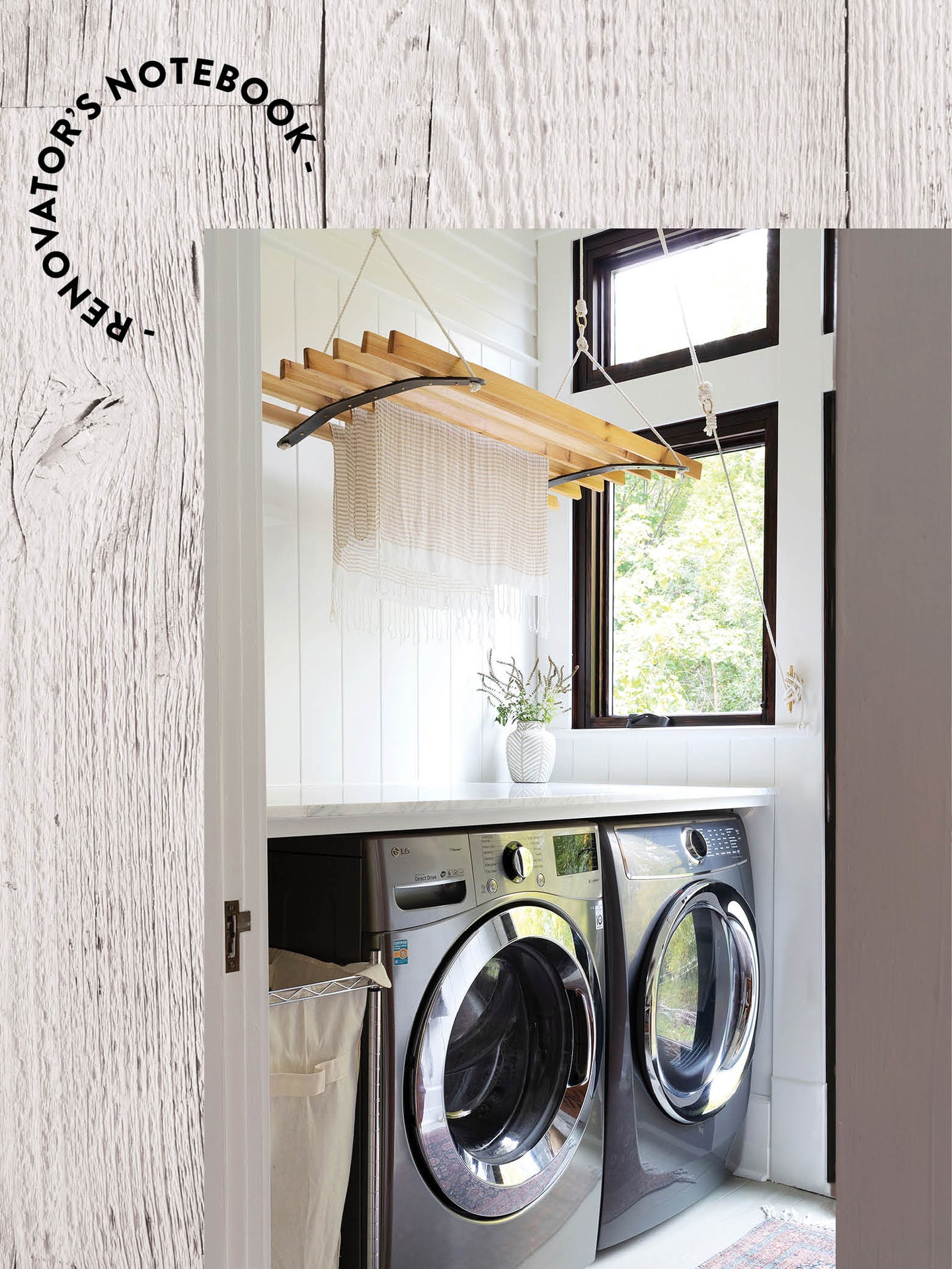 Cathy and Garrett Poshusta had a hunch the random interior window in their Ellensburg, Washington, kitchen used to be a doorframe. Sure enough, when the couple decided to blow out the wall behind the banquette and turn the adjacent space into a laundry room, they discovered the original threshold. “Renovating older homes is funny—you’re always finding out what people did before you,” says Cathy.

There was a lot of work to be done before the dead-end storage area (the Poshustas think the closed-off spot was originally a porch when the farmhouse was built in 1912) could be considered functional. For starters, the single-paned-glass windows were held to the wall with molding alone and offered little insulation. Plus, there was no door leading to the clothesline outside. Fortunately, the Poshustas are seasoned renovators. Prior to this project, they had tackled six remodels together (during which Garrett taught himself how to run plumbing, dig trenches, and hone marble), chronicling each on their blog, The Grit and Polish.

The couple took the same hands-on approach—and got scrappy with a few of their purchases—in order to maximize their budget and the room’s 6-by-6.5-foot footprint. Here, they look back on the lessons they learned from turning “the worst room in the house” into the ultimate chore-day hangout.

Save on Construction by DIY-ing Outside Your Comfort Zone

Cathy: The biggest challenge was adding the new door and windows. We worked with our local Milgard supplier to custom-design the replacements, then opted to install them ourselves. We wanted them to match the rest of the home’s original windows, so we went with wood frames over vinyl. It’s pricier (the total cost was $3,700), but keeping the historic look was worth it.

Garrett: Because it’s a tight space, the measurements for the framing had to be precise. If one of those transom windows was bigger than the other, and we put the trim in, we would have seen the difference.

Cathy: We started by adding the framing for the two transom windows, one casement window, and the door. Then we installed a layer of plywood and paper to the exterior and wrapped the openings in waterproof sheeting. To temporarily close the house up for the night, we hung a tarp and tacked it to the framing. Looking back, I wish I would have met face-to-face with the window designer to really understand what the dimensions of the windows meant, but this DIY YouTube video was a lifesaver.

Reuse as Much as You Can

Cathy: We carefully removed the MDF paneling on the walls so we could donate it to our local Habitat for Humanity store. (We always try to limit what we put in the landfill.) The new walls are a mix of original molding and new tongue-and-groove planks. Aside from doing most of the work ourselves, keeping any old materials we could, like the ceiling and flooring, saved us a lot of money.

Seek Out Pros for the Scary Jobs

Cathy: We ignored the bald-faced hornet nest hanging outside the laundry room all summer because they didn’t bother us, but once we started work on the exterior, we knew they were going to be an issue. We saw a guy on YouTube remove nests for research purposes—Garrett felt confident he could do it. He climbed up there with CO2 to put the hornets to sleep. The only problem was it was 8 a.m. and some of the wasps had left the nest for the morning and were buzzing around. After one sting, he called it quits. We eventually had to spray the nest with insecticide. If we were to do it again, we would do it late at night or leave the relocation up to a professional.

It’s Worth Taking the Time to Learn the Tough Stuff

Photography by the grit and polish

Garrett: Plumbing can be intimidating. Fortunately, the worst-case scenario is that you end up with a leak. I’ve learned most of what I need to know through help forums (like this one). Once you have that base knowledge, when you’re doing an isolated project such as this, you really just have to figure out the right plumbing codes for inspection. If you see renovating as a part of your future, picking up these skills is a good investment.

Cathy: We scored our washing machine for $550 and dryer for $450 by buying them at a “scratch and dent” sale in Seattle. They’ve never been used—most of the appliances were either damaged in transport or at the original store. The marks were so small and only on the top, so the new marble countertop we added hides them anyway. I didn’t even realize they weren’t a matched set until we were loading them in the truck!

A Hanging Rack Is a Must-Have

Cathy: I love hanging laundry outside, but I never had a good place to do it in the house. Instead of splurging on a fancy contraption from a high-end brand, Garrett created this one for a tenth of the cost—around $50. He made it using wood staves, 60 inches of cotton cord, two different types of pulleys, ceiling hooks, and a brass nautical cleat. Because we don’t have a metal workshop nearby, he bent the two pieces of flat steel that hold the wood together with the tires of his truck. Cabinets would have blocked the light from the window, and I love that you can keep clothes out of eyeshot. We’ve never been so willing to do laundry!

See more stories like this:  It Cost Us $25K to Turn an Old A-Frame Into a Scandi-Inspired Getaway My $40K Exterior Remodel Was an Unexpected Lesson in Landscaping We Financed the Renovation of Our Dreamy Desert Inn All by Ourselves