It pays to own a vintage store. 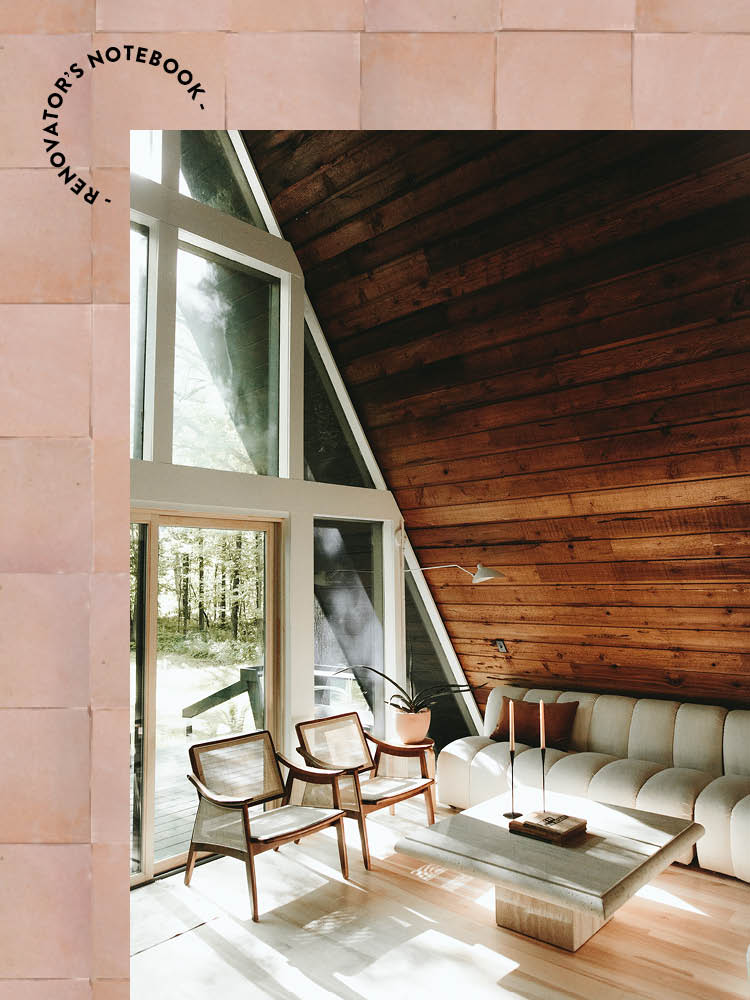 In Renovator’s Notebook, homeowners open up about the nitty-gritty of their remodels: How long it really took, how much it actually cost, what went horribly wrong, and what went wonderfully, serendipitously, it’s-all-worth-it-in-the-end right.

Ashley Hewitt Lemke and Jamie Hewitt have been sharing everything since before birth—starting with a womb. The twin sisters co-own a photography business, a Minneapolis vintage store called Arlee Park, and now, along with their husbands, a rentable ’70s A-frame home, 90 minutes north of the Twin Cities.

Between the end of November 2018 and June 2019—just seven months—Ashley, Jamie, and their husbands Brooks and Alex got to work. Brooks boasts a vast knowledge of home projects, while Alex is a carpenter by trade. Combine those skills with the sisters’ knack for design and…voilà! An outdated old cabin becomes Lilla Norr, a positively serene escape.

The A-frame, which sits on a river tucked within five acres of woods, was originally built in 1978 by a team from British Columbia. Fast-forward a few decades and the foursome salvaged what they could, pairing original features with Scandinavian-inspired decor. The name Lilla Norr (pronounced le-la norr), which translates to “little north” in Swedish, nods to three things: the nearby town of Mora, Minnesota; its sister city in Sweden (also called Mora); and its northern proximity to Minneapolis and St. Paul.

Though they make it look easy, overhauling a long-outdated building comes with an abundance of challenges (like an unfortunate amount of flooring rot). Here, the couples share what it took to transform their A-frame into an amazing hideaway.

Consider Building and Installing Yourself to Stay Within Budget

We were able to keep the cost down on renovations and spend what we budgeted on materials alone by doing mostly all the work ourselves. We own a vintage store, so sustainability was at the forefront of our mission, focusing on restoring rather than a complete gut and renovation. All four of us spent almost every weekend of those seven months up at the cabin remodeling everything on our own—with moral support and meals from our parents.

advertisement
Not up for a DIY? Never fear: Kick-start your project with HomeAdvisor’s directory of addition and remodeling contractors in your area.

Carve Out Storage Space Where You Can

Knowing the A-frame was eventually going to be on Airbnb for others to rent, we considered how best to utilize the space. Not only is the home small in stature—coming in just under 1,000 square feet, or 992 to be exact—the triangle shape causes the loss of some valuable square footage. Storage was lacking, so we had to outsmart those angled walls. Our furnace room is used as a spot for rental supplies, and we maximized the kitchen cabinet space for extra storage.

Be Prepared for (Literally) Unseen Costs 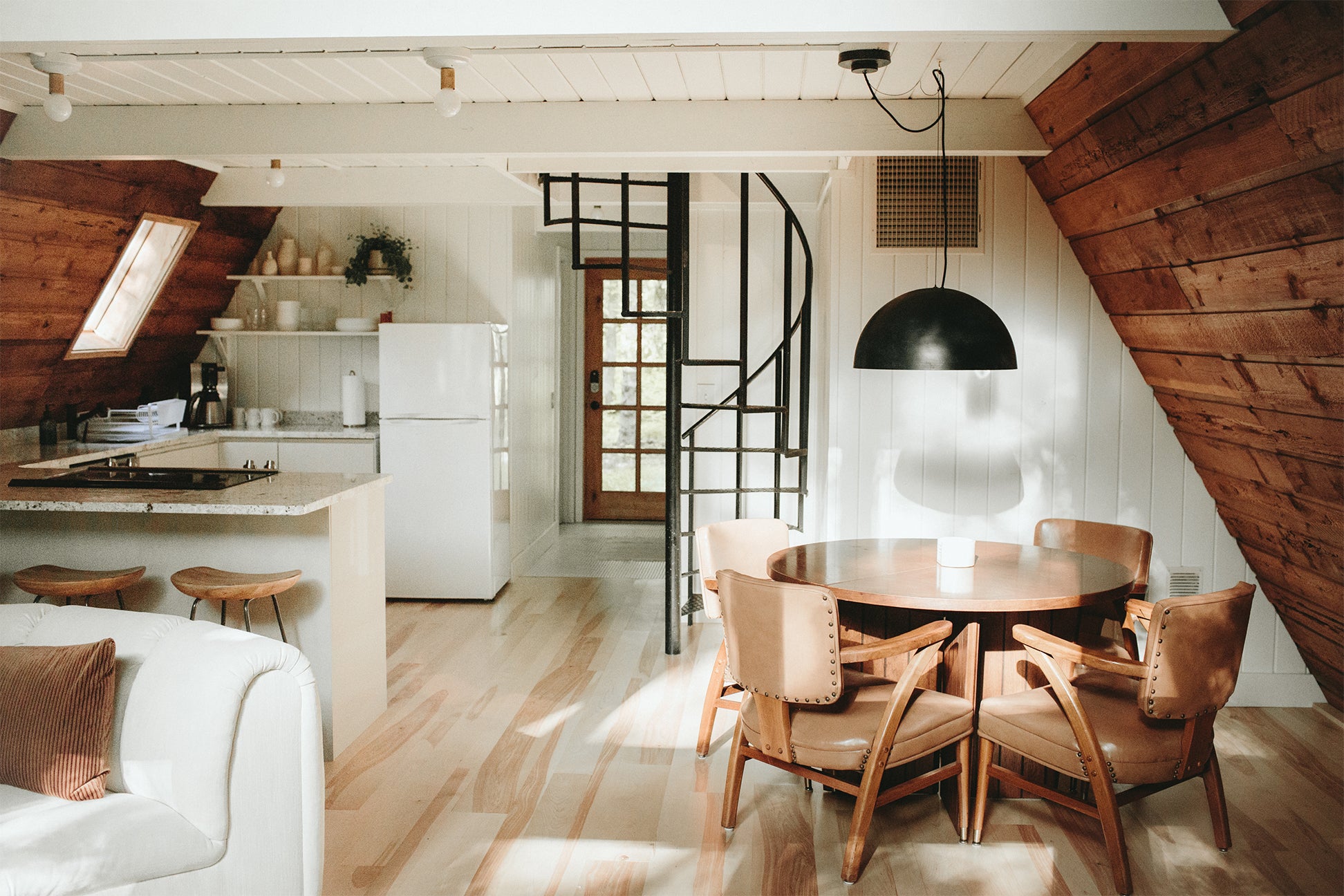 Since we decided to replace all the flooring on the main floor, we had a feeling the subfloor would need replacing, as well, but we didn’t know how much of it would be salvageable. Unfortunately, we uncovered rot and mold in the subfloors on the main floor, so all floor coverings had to be removed to eradicate those issues. The most labor-intensive project was the flooring—removal of old and installation of new. We found a local millworker who milled our flooring out of storm-felled birch trees in Minnesota.

All of the furniture is secondhand except the bed frames and barstools. This includes the 1970s Morso wood stove ($350), 1987 Bernhardt Flair Division modular sectional ($80), vintage Italian travertine coffee and console table ($220), and 1950s Crane Diana bathroom console sink (free). We sourced the dining set to sell in our store, but felt it best fit the cabin; it was $130 for the set.

There’s also a white couch! We’re a tidy group, so we had no reservations about the color. We have set eating and drinking rules for guests, so the couch has (so far) only needed minor spot treatments for those who haven’t obeyed. Since the fabric is original, it’s far from perfect anyway, making it the most fitting white sofa you could possibly have in a rental.

Don’t Be Afraid to Do Things Bit by Bit

As we knew we had to draw the line somewhere when it came to renovations, we’re saving a few projects for the future. When we first visited the A-frame, we were really hoping the grime on the windows could simply be cleaned off. Unfortunately, since they were the original windows, the seals had broken, which let moisture in between the panes, making them impossible to get totally spot-free. We made the decision to replace the sliding door and the windows on each side of the slider. Because it was a project we didn’t anticipate, we are replacing the remaining windows gradually. Next year, we plan to install a sauna overlooking the river. There are upgrades to power that have to be done beforehand, so we’re spacing those expenses out so we’re able to offer a relaxing addition to the property once winter of 2020 rolls around.

Rot and mold, be damned—now that the A-frame is in A+ shape, it’s ready for visitors willing to venture a little north.

See more renovating stories: These Are the 17 Best Before-and-After Transformations We’ve Seen My $40K Exterior Remodel Was an Unexpected Lesson in Landscaping We Financed the Renovation of Our Dreamy Desert Inn All by Ourselves