Adultify Your College-Era IKEA Bed Frame With This Headboard Hack

An L.A. creative’s DIY was a family affair. 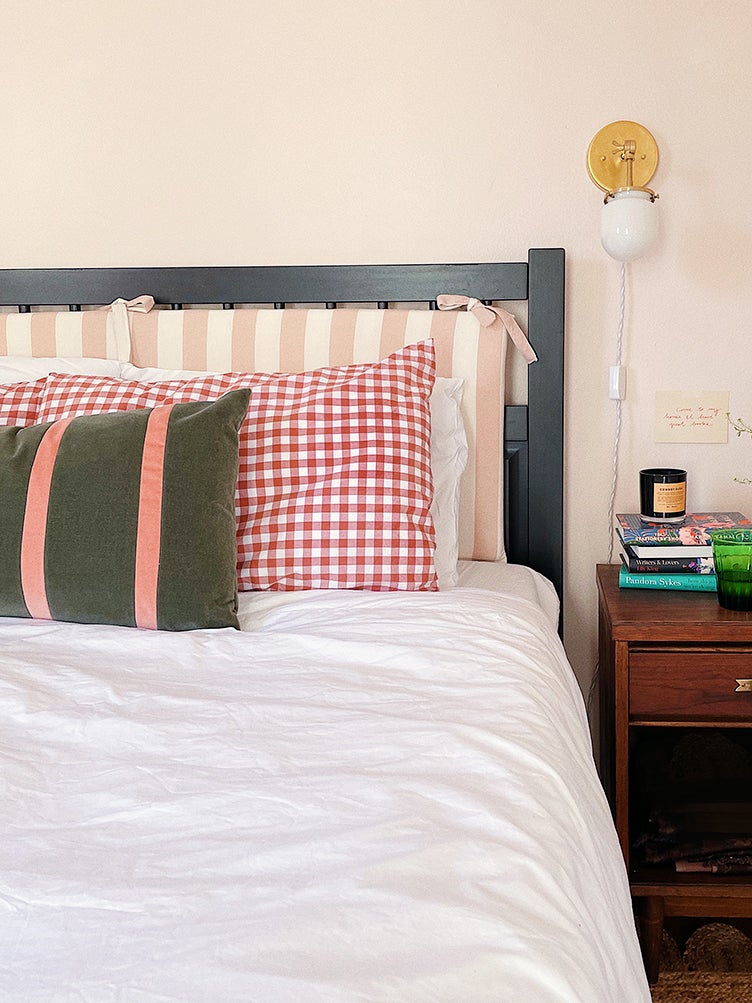 Like most early-20-somethings moving into their first post-college apartment, Ali LaBelle rushed to IKEA with her mom and bought all the essentials. “We got everything you would need—Malm dresser, office stuff,” she says. Fast-forward a decade later and the Los Angeles–based freelance creative director is slowly replacing all her “first round” furniture finds with meaningful pieces. “I’m a collector, so I’m doing it slowly,” she explains. The one purchase she isn’t ready to part with yet? Her queen-size bed frame.

LaBelle’s reasoning for keeping the semi-falling-apart furniture (the rungs at the top are all loose): She’s still saving up for her dream bed. “It was obvious that it isn’t really the style I love, but I’m not yet ready to invest in something else,” she says. So when her sister sent her a photo of a guest room at London’s Ned hotel, where the beds have foam pillows tied to the frames, her wheels started turning. “I thought, that’s such a nice way to hide the heaviness of the frame but also add another pattern into the mix and a little bit of texture,” says LaBelle. With help from her interior designer mom (and inspiration from a napkin), her IKEA bed is now in sync with the rest of her adult-approved space. 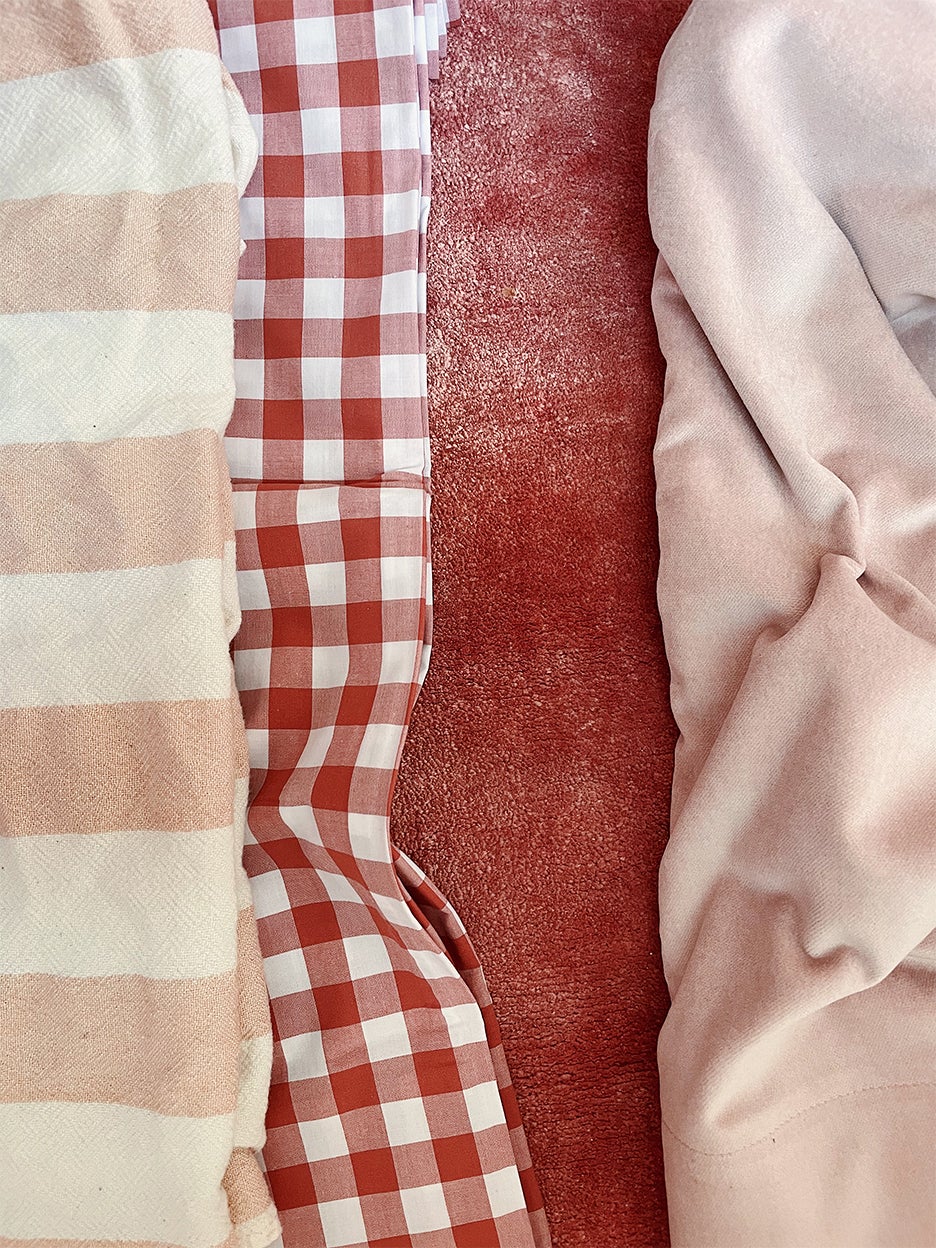 At some point last year, LaBelle found herself at a Heather Taylor Home sample sale scooping up a mix of napkins. All those fabric “swatches” sitting in her kitchen served as inspiration for her headboard design. “I was using one of them one day, and I was like: This is so pretty! I wish they sold fabric by the yard,” she says. But the brand does make handwoven tablecloths, and it turned out they’re just big enough to cover a cushion that spanned the length of her headboard. “It was kind of serendipitous that it all worked out that way,” she recalls. Her pattern of choice? Milos, a thick blush stripe pattern starting at $186.

To craft the cushion, LaBelle bought 1-inch-thick foam batting and cut it to match the dimensions of her headboard. Then she wrapped it in a layer of quilt batting, pulling it tightly as she secured it in place with hot glue so there weren’t any lumps. From there, she cut two rectangles out of the Heather Taylor Home fabric. LaBelle’s mom took charge of sewing the top and sides and adding three ties that can attach to the rungs to hold everything in place. 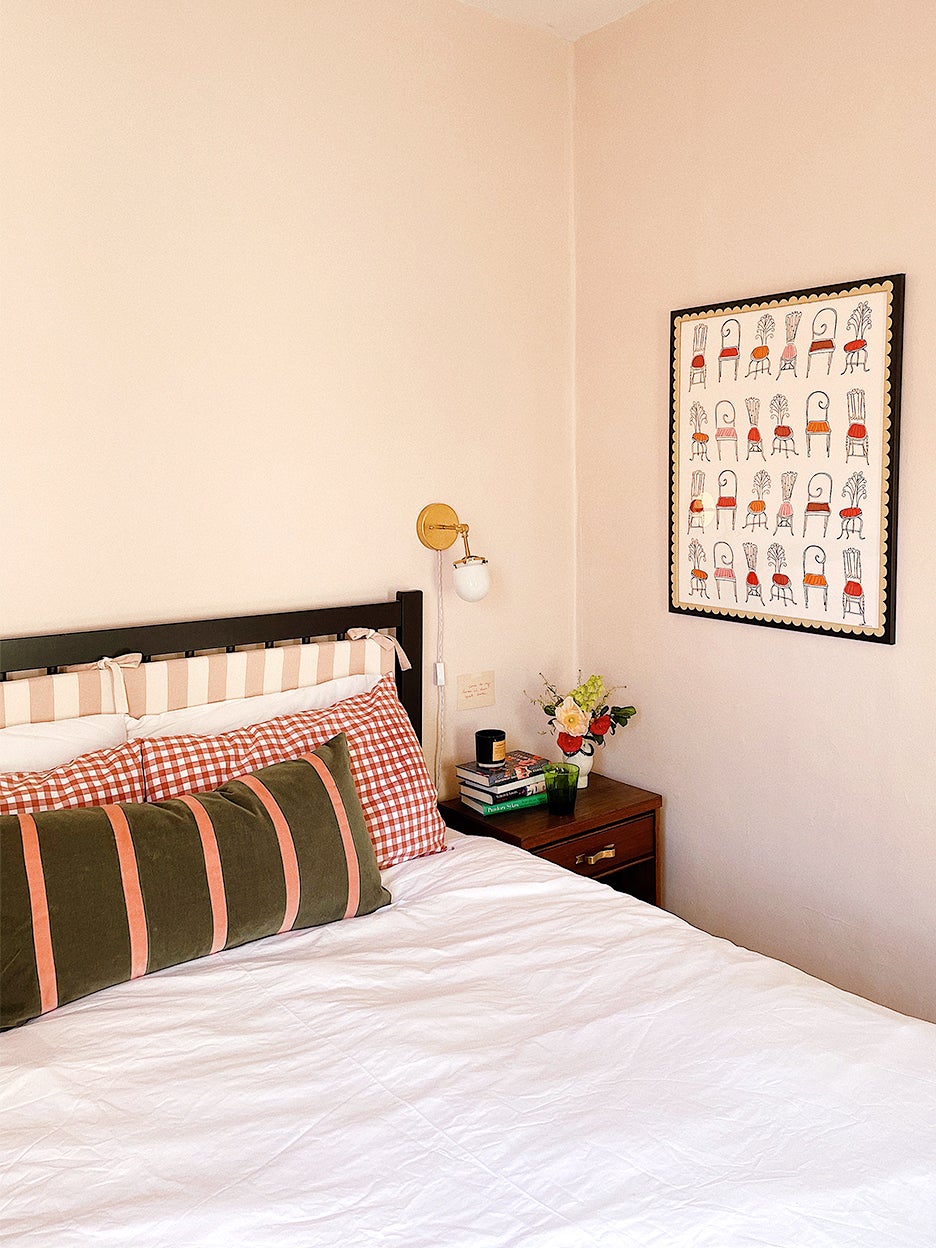 LaBelle’s biggest concern was being able to clean the cushion if it ever gets dirty. So her mom left the bottom seam open (there are little ties that secure the batting from coming out); that way the whole cover can be removed and tossed into the washing machine. (You can’t even see them because they’re tucked behind the mattress). “It looks superclean,” says LaBelle of the end result. “Bolstered headboards can be such a commitment, and I didn’t want to spend thousands of dollars.” A hint of pattern is all it takes to go from college-esque to cool.