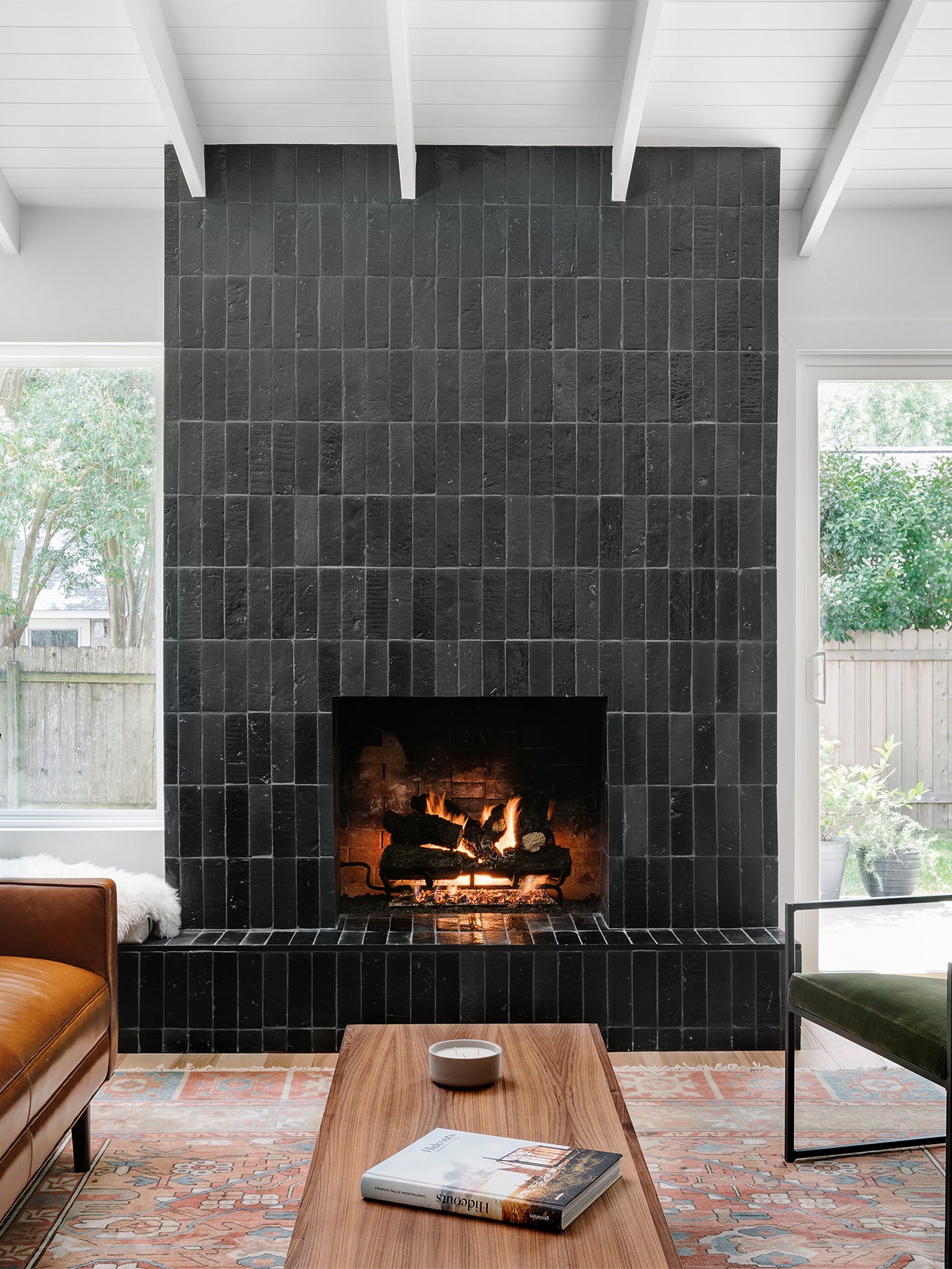 It’s tough to imagine that the Austin home of photographer Chase Daniel and his wife, Lauren, was renovated on a budget. After all, the space has all the hallmarks of a polished, if not costly, reno: the crisp white shiplap ceiling creates a sense of grandeur and a statement floor-to-ceiling matte black tile fireplace anchors the living room. Appearances can be deceiving, though.

“Most of what we ended up doing was cosmetic, but it made a big difference,” says Daniel, who worked with a local handyman to find inexpensive materials to keep the cost down. Now, the once-dated house with a popcorn ceiling, beige carpet, and wooden paneling, is totally unrecognizable. Here’s how they did it, and the most transformative (and affordable) part of the project.

The popcorn finish needed immediate attention: “All you see when you enter the front door is the giant slanted living room ceiling,” says Daniel. To make the living room less 1973 and more 2019, the couple opted out of basic drywall and found a smart way to make the high ceilings stand out: shiplap. “We got primed shiplap from Home Depot and created an exposed beam look by going where the roof joined,” he says. All-up, it cost the pair less than $1,000.

The living room is 400 square feet, and there are no ceiling lights. “We debated on putting in can lighting, but we have a slanted ceiling and we didn’t want to put in a chandelier either,” he says. The solution was punching out another window on the left side of the existing fireplace and replacing the sliding glass door, which created a full wall of light and further made the fireplace a focal point in the room. Paired with wall-mounted sconces and table lamps, the room is now bright enough during the day and has a soft glow at night.

To revive the dull fireplace, they turned to their friends at Clay Imports, an Austin tile company that works with artisans in Mexico. “We knew we had to replace the gritty stone on the fireplace but wanted it also to feel cozy and warm,” Daniel says. The couple went with a glazed Saltillo thin brick tile in matte black to juxtapose the light floors and crisp furnishings. Now totally unrecognizable, it’s proof that a few smart, inexpensive cosmetic changes can make all the difference.

See more jaw-dropping before and afters:  Whoa, This Exterior Before and After Cost Less Than $1,000 4 Unbelievable Before & After Bathroom Makeovers A Tiny NYC Kitchen Gets a French Country Makeover