A Tiny NYC Kitchen Gets a French Country Makeover

Plus, one seriously smart IKEA hack. 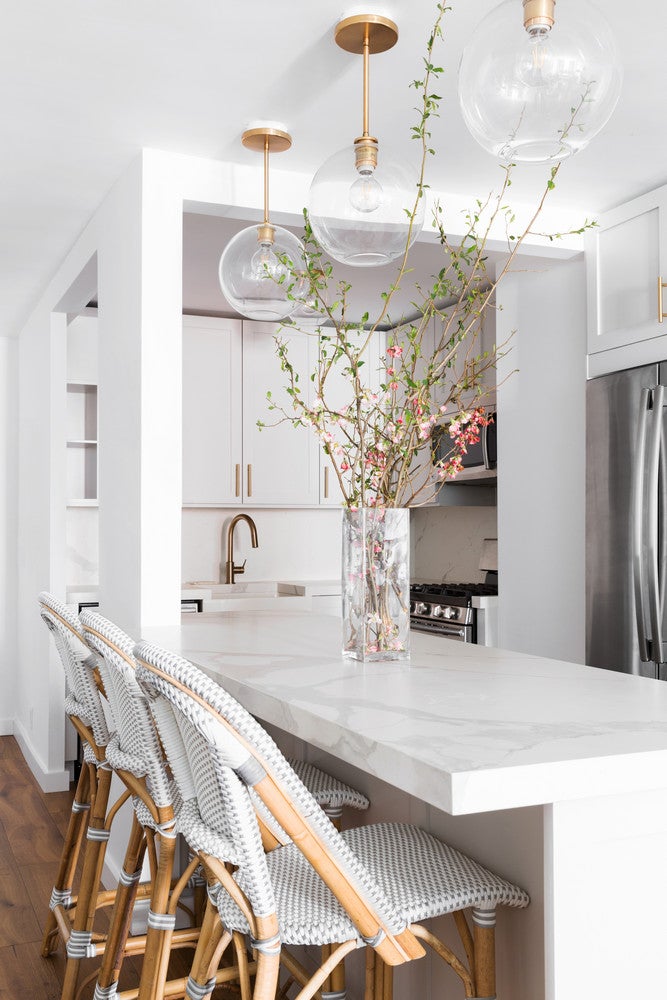 New York City kitchens are notorious for their tiny galleys, awkward footprints, and nonexistent storage. Only the most fearless, most imaginative New Yorkers would dare to dream of updated appliances or an open-concept layout. Maggie Burns‘s latest clients—a close friend from Toronto and her husband—are among said visionaries. While the native Canadian was tasked with reimagining the couple’s entire Gramercy Park condo, it was their shoebox-sized kitchen that required the most attention.

“She bought this place about 10 years ago and it was just outdated. The kitchen was super small and the apartment itself felt blocked off,” recalls Burns. “They’re huge cooks, so we wanted to open up the main space and make it a lot more conducive to entertaining.”

Functionality and visibility were the main objectives of the seven-month-long gut renovation, which included all new flooring, a full bathroom makeover, and expanding the kitchen and dining areas. Coming in under $40,000, Burns opted for a timeless, neutral scheme for the kitchen remodel—carving out room for a generous island, a tiny wine fridge, and killer dinner parties in the process.

Prior to the transformation, the kitchen was an isolated galley, completely independent from the dining room. With little room for light (let alone hosting friends), Burns’ first priority was expanding into the main living space by blowing out the dividing wall that once housed the refrigerator and adding a spacious center island with room for seating.

The only existing reminder of the kitchen’s galley past is the arch-like barrier that borders the back corner. “That pole has electrical in it, so we had to work around it. It was difficult at first, but it decided for us where the island would start. It lends itself to the design,” says the designer of making the most of the structural post.

Before getting swept up in the new layout, Burns had her clients take inventory of their most essential cookware. By assessing their storage wants and needs in advance, the designer was able to create a space that actually suited the couple’s lifestyle.

“We planned out each drawer and where each tool would go. She happens to have a lot of big pots and pans, so we did deeper drawers under the counters instead of smaller drawers that are less functional. It almost doubled her storage space!” the designer suggests.

While the clients’ overall renovation budget was certainly forgiving (the couple had approximately $150,000 in total to shell out on the home), Burns was still faced with the challenge of deciding where and how to cut costs. Custom cabinetry was just one place the designer took a more budget-friendly approach, and, we have to admit, we fully support her hack of choice.

“We decided to do an IKEA cabinet system. But then, because we were saving so much there, we splurged on cabinet fronts from Semihandmade. You get the look of a custom kitchen without splurging on custom cabinets,” she reveals.

Another savvy save? While the countertops and backsplash appear to closely mimic the look of a rich Calacatta marble, these surfaces are in fact cut from porcelain with a printed marble design.

“We looked into doing real marble, but because the clients really use their kitchen, they didn’t want a material that was going to get marked up and stained,” says Burns. “The porcelain was a last minute decision. We literally ordered it two days before they installed it and it ended up being amazing!”

Because exclusively white spaces often have the potential to feel cold and impersonal, Burns incorporated color in fresh, yet unassuming ways. Without veering too far from the room’s overall airy palette, the designer chose an almost-greige paint color from Farrow and Ball for the cabinets. Likewise, the dramatic veins in the printed porcelain countertops and backsplash extend a similar sense of texture and warmth to the room.

Courtesy of maggie Burns Much like the other finished rooms—most notably, the exceptionally sleek bathroom (a space that pays homage to the client’s husband’s preference for contemporary design)—the kitchen is simplicity at its finest; it’s as much a lesson in renovation planning as it is in not overdoing it. Nothing soothes the soul quite like a design-forward (and hassle-free!) kitchen.