See how one craftsman made this space entirely by hand. 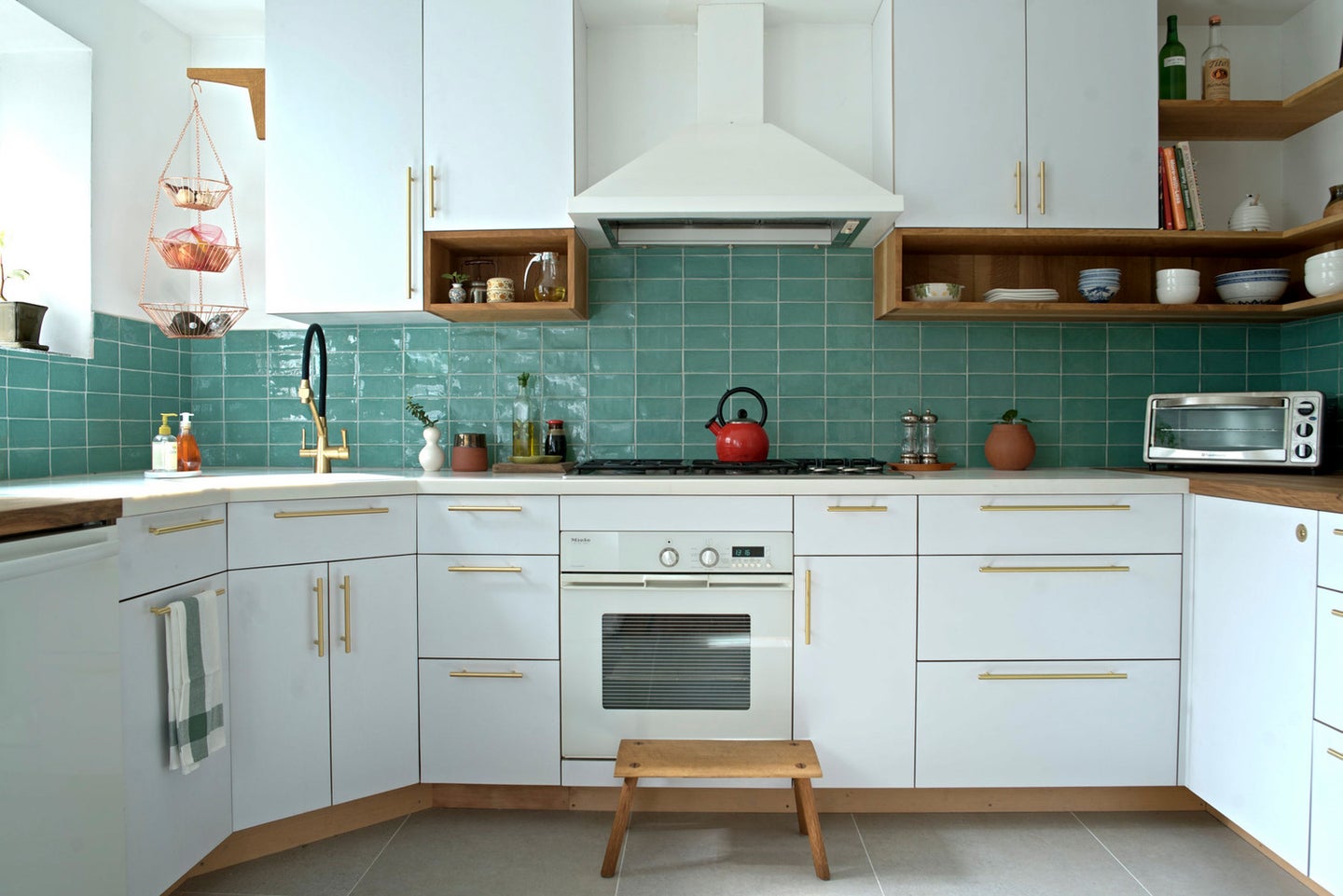 When you have your own business centered around creating small-batch custom furniture and interiors, it’s only fitting that your own home becomes a full-blown custom project as well. At least, that was the case for John and Gina, the Philadelphia couple behind Leeward Furniture. The duo, who has spent the last few months in a whirlwind of life updates—from launching their own business to having a child and renovating their new home.

The kitchen was first, and it instantly became its own labor of love—from its vibrant teal backsplash tiles to the unique

, one would have never guessed that the full reno only cost $2,500. All that is thanks to John’s expert eye and prime salvaging skills.

Take, for example, the retro white melamine appliances, which were left over from a previous project of his, while a handful of the cabinets were crafted from oak that was leftover from his shop.

The blend of earthy colors and materials were dreamed up by Gina, who makes up the design side of the pair. As they playfully put it on their website, “John is the woodworker and Gina is all the rest.” But as Gina tells Domino, the inspiration behind the overall design of the kitchen was to bring the outdoors in.

Influenced by the frequent trips she and her husband take to the West coast, Gina sought to play with light and color, settling upon a teal/mint backsplash that brought a bold focal point into the space.

“Since we were starting out with all-white appliances, I just really wanted to avoid the kitchen feeling too sterile, says Gina. “I need all my living spaces to feel cozy and nested, even if they are super simple and neat. The jade tile and wooden shelving was a perfect accent to the stark white, and the brass handles/pulls of the cabinets and drawers kept it from looking too dated in my opinion.”

In truth, the appliances weren’t stark white to start out with. In fact, John had to scrub about 10 years worth of grease off them to get them in their current state, but they were in too good of a condition to get rid of. Plus, a little bit of elbow grease saved the couple quite a bit of cash on the whole project.

A custom corner sink in simple white Corian further complements the pops of white. John explains how he creatively thought to use wood on the rest of the counters when he initially ran out of the Corian material to create more of a raw, Japanese-inspired look.

But perhaps the most unique aspect of the space is the cool range of open shelving that comprises John’s favorite element of the kitchen. “I love those little open box shelves,” he tells us. “We put the most used items in there and it’s super convenient to have a neat little home for the things we use every day.” Not to mention, they add to the craftsman feel and match the oak floors that extend throughout the rest of the home.

For Gina, it was all about imagining her things on display, “I’m a total plant lady, and kept picturing how the plants would look on the open shelving and for this reason, looked for a tile and color scheme that would complement that.”

The final result is a unique blend of styles and inspirations that match the couples eclectic personalities and perspectives on design. Mixing a bit of the West coast with a Japanese-inspired palette, we’re feeling a healthy mix of retro, salvaged, and beachy aesthetics here.