Warm Wood and Natural Accents Rule at this Topanga Home 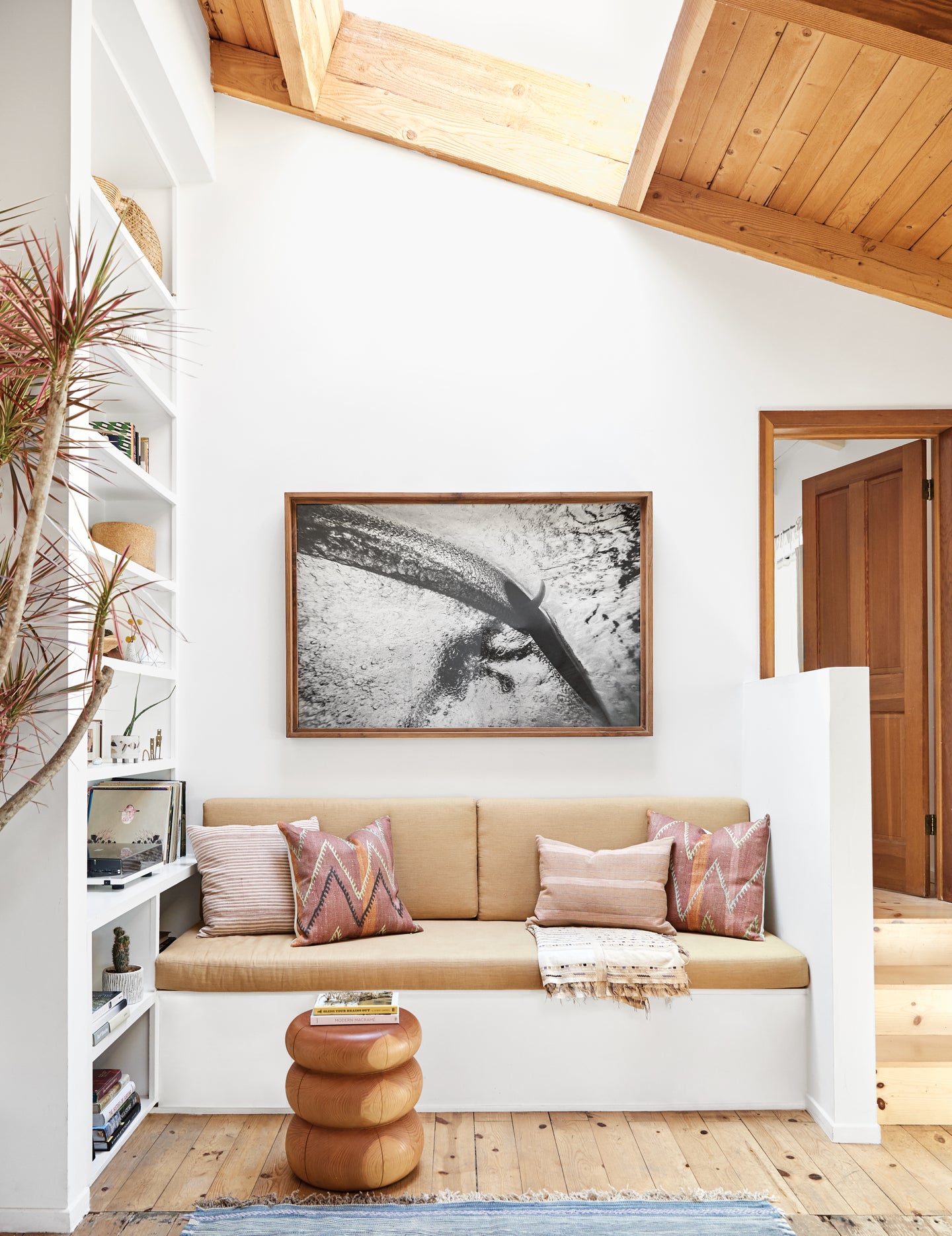 This story originally appeared in the Summer 2019 issue of Domino, titled “Natural Wonder.” Subscribe to be the first to receive each issue.

Malia Mau knows all too well the bargains parents strike to keep their kids content. “He hates being inside,” the jewelry designer says of her 15-month-old son, Okana James, noting that the simple act of closing a door can signal a full-on meltdown. “It almost feels like we need to live outside to make him happy.”

The apple doesn’t fall far from the tree. When Mau and her filmmaker husband, Jess Bianchi, decided to leave San Francisco for Los Angeles two years ago, they landed on the bohemian enclave of Topanga as much for its proximity to the beach as its easy access to state parks and rugged mountain landscapes—plus one other all-important factor: “We wanted more sun,” Mau explains.

They now get plenty of it in the 1970s bungalow they call home. But it wasn’t always so. Though Mau was drawn to what she describes as a “simple structure that hadn’t been butchered by tons of remodels,” the house was dark and dated, with a dash of DIY intervention. “A lot of the properties in Topanga started as modest one-room cabins that people added to as needed,” says Mau, emphasizing that the expansions were usually more amateur in approach. “At our place, we’ve come across some quirky things—maybe that’s why the floor in our bathroom was in such bad shape,” she says, laughing at the understatement. After moving in, they learned that the floor was collapsing; there was black mold beneath the kitschy pink tub; and the space was inhabited by a real live rats’ nest, requiring a complete renovation while Mau was pregnant. “I just remember looking at the gross, rusted-out plastic [shower] doors and thinking, That bathroom has to go,” she recalls.

Undaunted, the couple embarked on a series of small projects to transform the rest of the house into a light-filled aerie that blurs the lines between indoors and outside. They maintained the original hardwood floors and beamed ceilings—one of the features that first attracted Mau to the property—but painted the walls white and added a trio of skylights in the living room to flood it with sunshine. They also converted the garage into a gym and turned the adjacent room into Mau’s studio—where she and her sister, model Jessica Mau, are developing a women’s lifestyle brand, working with female artisans based in India and Colombia on handmade jewelry, textiles, and decor—applying the same pinewood wall treatment and polished concrete flooring to imbue both spaces with earthbound warmth.

That juxtaposition of rusticity and refinement weaves its way throughout the home, from the nubby rugs found on a trip to Morocco and mid-century furnishings to the artwork, much of which was made by friends or artists they admire. “I thought having a Southwestern-adobe-vintage vibe would complement the bones of the house,” says Mau, who didn’t follow a specific design inspiration. “I love raw elements and natural fibers.”

The way it all comes together belies the fact that nesting has never been a priority for the couple. Mau moved to Hawaii from the Bay Area when she was 18 and studied abroad in Cyprus, while Bianchi moved from Georgia to Nigeria to Italy to Kauai with his family as a youth. “We both get restless,” she acknowledges. Still, becoming three has made them more rooted. Okana’s nursery doubles as a guest room for visiting friends, of which there are many. “It’s easier, with the baby, to have everyone come to us,” says Mau, though she allows that the trio also travels to their tiny 200-square-foot house in Kauai. In Topanga, Mau and Bianchi will often end up on the deck watching Okana play in their diminutive yet always growing garden, which includes lemon, kumquat, and tangerine trees, as well as a recently thriving blueberry bush. “Our dream for the property is to plant more things we can eat, so we can get everything we need right here,” she says. It seems this is one bargain where everyone wins.