Every bedroom is a surprise. 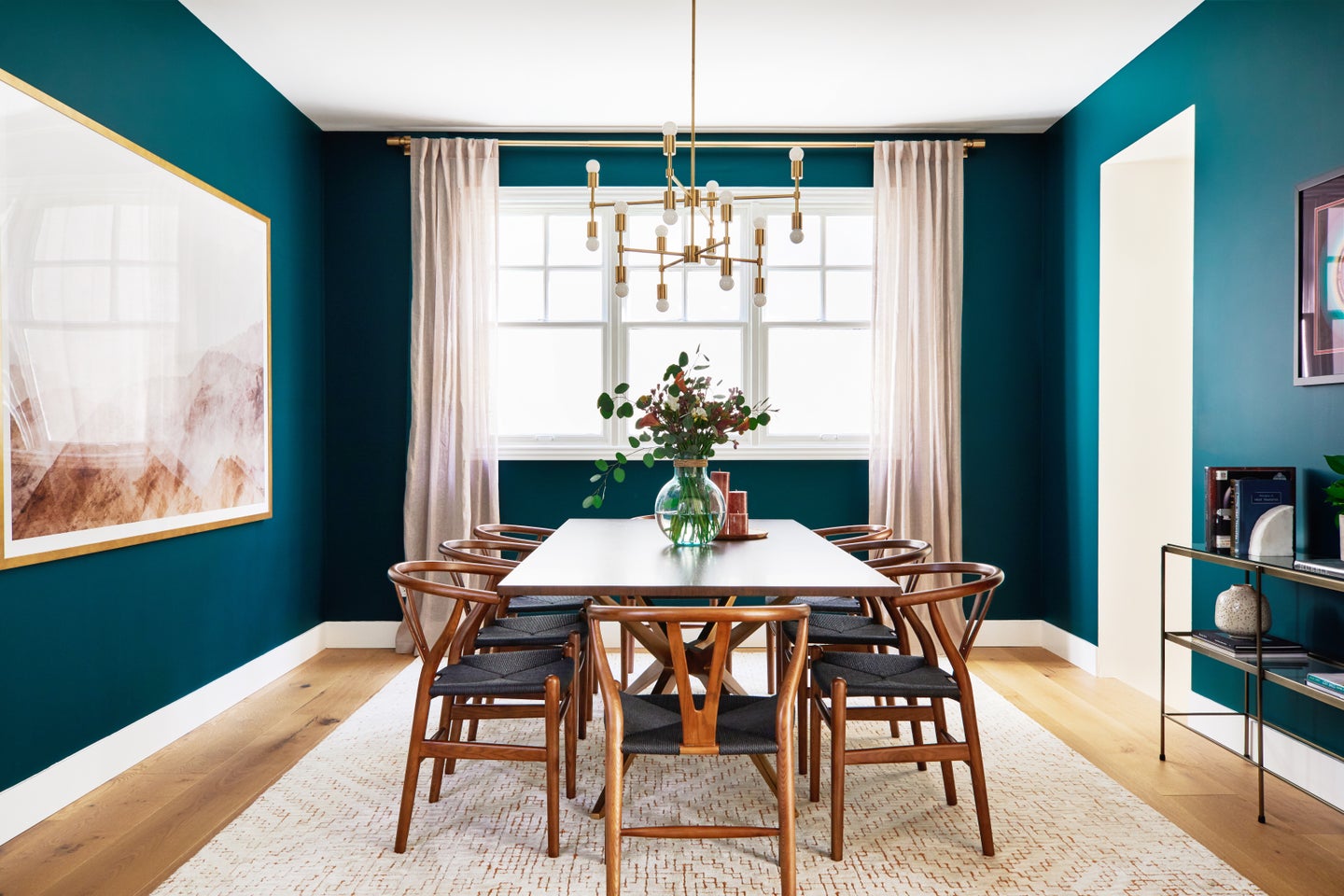 When Homepolish designer Mandy Cheng arrived on the scene of this Manhattan Beach home in California, she was ready to get down to business—not just because she had a fun young family to work with, but mostly because the oceanside abode was giving off serious corporate vibes.

“It was a bit sleepy,” recalls Cheng.“For whatever reason, all the rooms were painted in office colors and covered with commercial carpeting.”

The Cape Cod–style house was traditional through and through, and yet her clients were anything but. With two little ones in tow—the youngest now 9 months old—Cheng saw an opportunity to channel the family’s spirit through color, print, and mixed wood finishes. “They wanted something that was fun and more current but also something that they could grow into,” continues Cheng. “I tried to give them a timeless, modern look.”

Letting bold accent walls and functional furnishings lead the way, Cheng infused the tired home with charisma. We recently caught up with the designer to learn more about her latest project and snagged a few tips along the way.

Open-concept floor plans are all the rage, but they’re trickier to master than first meets the eye. In an effort to establish a sense of cohesion between the casual family room and the kitchen, Cheng approached the space from a color perspective by applying the same general color palette she used in the kitchen to the living area. “I wanted each room to feel really special, but this helped tie them together,” says the designer.

Having already painted the kitchen island a dark blue, Cheng opted for the same hue for the fireplace. Likewise, dusty orange throw pillows reference the leather barstools at the counter.

Set the Mood with Art

Cheng’s vision for the dining room started with the tiniest hint of turquoise. Initially inspired by the small print that now hangs over the console table, she took the pop of color and ran wild with it on the walls with Benjamin Moore’s Sherwood Forest.

“It’s kind of a dark room, just in the way that it’s oriented and sandwiched in the middle of the house, and I really wanted to go bold with it,” says Cheng. “When you pass by, you can’t help but stare.

A large-scale print and breezy window treatment introduced a much-needed sense of lightness to the space.

Test Your Limits with Temporary Solutions

The boys’ bedroom was the first space Cheng designed upstairs. Seizing the moment, she used the little one’s dwelling as an opportunity to see how far her clients would be willing to push the boundaries on accent walls.

“Most clients are terrified of the idea. If they’ve never really had wallpaper before, it feels like a really permanent thing,” shares Cheng. “I wanted to show them how cool it could be if they just let me do it.”

advertisement
“Most clients are terrified of the idea. If they’ve never really had wallpaper before, it feels like a really permanent thing.”

Still, she didn’t dive in without testing the waters first. In lieu of wallpaper, Cheng had the walls painted in Blue Macaw and Bluebelle by Benjamin Moore and painstakingly applied a series of celestial-inspired decals she found on Etsy by hand. “[The wife] works in aeronautics, so space is a big part of their life,” adds the designer.

To say her clients thought the room was out of this world, would be an understatement.

Cheng went full force with wallpaper in the nursery, but for the sake of sparing her client’s budget—and in the name of creating contrast—the designer swathed two adjacent walls in a perfectly pink elephant print and went with a soft blue paint color for the other two.

In the master bedroom, Cheng set the stage for zen with feel-good accents and accessories—like a Japanese woven silk wallpaper, greenery, and sheepskin rugs. “I wanted the headboard wall to be really bold without changing the way the room felt,” says Cheng.

“As long as they’re the same tone, I have no problem bringing in different colors of wood.”

The designer opted for floating shelves over a gallery wall or large-scale artwork so her clients could showcase small treasures and switch out family pictures with ease. The addition of the brass brackets and wood planks completed the space. “I’m never afraid to mix wood because that’s the way it is out in nature,” says Cheng. “As long as they’re the same tone, I have no problem bringing in different colors of wood.”

Customize Your Furniture When an Order Goes Wrong

The vintage spindle back chairs in the formal living room are downright chic, but that wasn’t always the case. “When I bought them, the seller pulled a bait and switch on me,” recalls the designer. “It came in a different stain color and seat cushion than the one I had originally purchased. There was no way to get the correct chairs. I was stuck.”

Without going into full panic mode, Cheng handed the set off to a wood finisher to see if they could mend the problem. After continual bleaching, she finally got the chairs she had originally bargained for. “I loved the way they turned out, but it was a scary moment,” she adds. Luckily, all the other pieces seemed to fall into place—including a six-foot-tall print by Cheng’s brother, photographer Toby Cheng.

Save Your Big Budget Buys for the Kids’ Bathroom

If there’s one room parents should never feel guilty about skimping on, it’s the kids’ bathroom. This bright and airy space is a perfect example of a kid-approved room that’s easy on the eyes and even easier on the wallet.

“Because it’s just the kids and their parents going in there—no guests—I wanted it to be fun but also budget-friendly,” says Cheng. “I went big with the floor tile because it’s not a huge area and did very standard tiles on the wall.”

See more stories like this:  The Cheeky Wallpaper in This Portland Home Will Make You Look Twice California Chill in the Concrete Jungle: A Home Tour Nearly Everything in This Colorful Home Was Bought on eBay