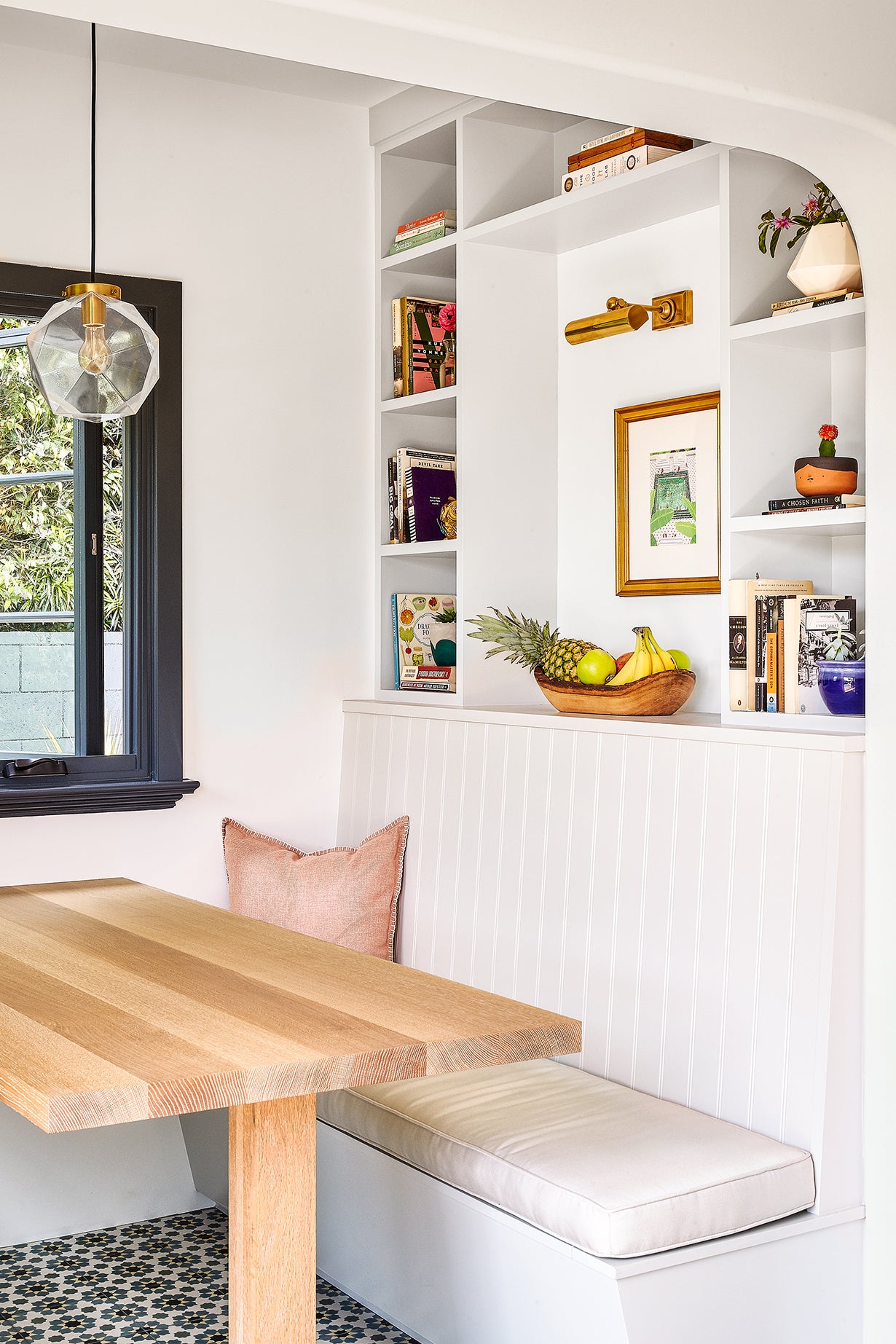 When a young professional decided to leave his big city life behind on the East Coast to be closer to his family in California, he settled on a perfectly petite 1924 Spanish-style bungalow in the vibrant oceanfront neighborhood of Venice Beach in Los Angeles. The only caveat: The home had been entirely stripped of its Spanish style and left with only bad ’90s renovations.

“The previous owner renovated it with a hodgepodge of styles that gave this house a bit of an identity crisis,” explains Beatriz Rose, principal at local firm Byrdesign. “They had completely altered the front porch and added a Greek Doric column made of foam core. There were sunburst windows, French vinyl windows that had too many grids, ’90s window boxes, and dated interior finishes.”

Venice Beach was a natural fit for Rose’s client, a former water polo player and surf enthusiast. The problem: The bungalow offered no indoor-outdoor living and very little natural light. “When I saw the house, I felt sad that had it lost its Spanish roots, and while I saw the challenges ahead, I was still compelled to improve it,” the designer told Domino.

With a modest budget and plenty of vision, Rose, a São Paulo native, set to imbue the space with a dose of Spanish charm fused with Brazilian tropical modernism. Ahead, she shares her top tips for giving a small, dark, and lackluster home some much-needed coastal vibes.

Initially, Rose was brought in only to give the house an aesthetic facelift. But after seeing a series of floor plan studies that would drastically improve his lifestyle, the client opted for a bigger renovation. “In the end, we reimagined the whole house,” says the designer.

The bungalow left a lot of room for improvement. The narrow galley kitchen was disconnected from the rest of the house and made it feel dark. The yard, which was located on the side of the home, was completely cut off from the interior. The entry to the master bedroom was through the dining room, and there was no master closet.

“I always start with space planning. In this process, I begin to see the design potentials for each room and things start to take shape,” says Rose. The client’s love for entertaining and the outdoors made it immediately evident that the house needed to be opened up to the exterior.

Find Space Where You Can

A third of the home’s floor plan was altered to connect the kitchen to the yard, add a master closet, tweak the two bathrooms, and add an outdoor shower. While opening up the galley kitchen (and effectively doubling its size), Rose also borrowed square footage from the large master shower to create a dining nook and built-in storage that was typical to homes of this era.

“The previous owner renovated the house with a hodgepodge of styles that gave it a bit of an identity crisis.”

“My favorite thing in the house is the dining nook,” says the designer. “I love the private booth seating and the two windows in this intimate space. It was inspired by a 1920s Spanish cottage that I had once visited in Pasadena years ago. It’s a pretty magical spot in the morning to sip coffee, read, or work, and, later in the evening, for conversing with friends over dinner and good wine.”

Make Decisions According to Sun Orientation

For a sunny destination like Venice Beach, natural light and a connection to the outdoors is primordial, something that Rose takes to heart. “Natural light is very important in my designs,” she explains. “The yard was facing the side of the house and there was no connection between the indoors and outdoors. The floor plan made the interiors really dark.”

After opening up the floor plan and replacing the windows, the designer worked on a color scheme that would complement each room’s sun exposure. “The dark blue-green and oyster color scheme was chosen for the kitchen, since it receives western exposure. The darker cabinetry color balances and anchors the sun-filled room,” she explains.

She made similar choices in the small, dark guest bathroom by choosing a light color palette and adding some much-needed green accents: “The space is north-facing and receives the least amount of light,” notes Rose, “so I made the white square subway tile go up higher on the wall to evoke a 1920s utilitarian atmosphere.”

Since the home had been updated with a slew of mismatched ’90s renovations, one of the main goals was to return it to its 1920s Spanish roots. “I like a clean and neutral backdrop where the architecture or some historic detail gets to shine,” says Rose. “I wanted to bring back some of the charming 1920s Spanish architectural elements with a modern twist.”

The designer replaced the painted concrete steps on the front porch with a mix of Saltillo tiles and decorative hand-painted Spanish tiles. She updated the existing windows to guide the eye to better outdoor views and opted for casement-style frames, which complement the Spanish architecture.

Inside, she also carried over the Deco tiles to a refurbished stucco-arched fireplace. She replaced the doorways in the house with arches typical to the home’s architecture and raised the ceiling in the living room to add wood beams and enhance the airy feel. The walls were kept white throughout to allow the addition of bullnose wall edges, another distinctively Spanish detail.

Most of the walls were kept white, but the designer was determined to infuse colorful coastal vibes in the space. “I was inspired by the warm Mediterranean coast paired with Brazilian tropical minimalism,” Rose says. Though she kept a tonal palette throughout, she added thoughtful graphic touches to give each room interest and soul.

Outside of the kitchen, the office is the only room that embraces bolder colors. It’s painted in Farrow & Ball’s Hague Blue and paired with a bright citron sofa. Elsewhere, vibrant window frames in shades of avocado green and cerulean blue add a colorful touch to the bathrooms, while tile and other small accessories give the rest of the home a colorful flair.

“Having grown up in Brazil, I’ve seen so much Portuguese-influenced tile and architecture that I could work with patterns forever,” notes Rose. “But Brazilian architecture also has a rawness and modernity that is very earthy and appealing, and I wanted to incorporate some of that expression into this project.”

Let Your Travels Inspire Your Bathroom

Rose’s Brazilian roots also inspired the guest bathroom, which boasts tropical vibes in a modern setting. “I always like to mix in a fun surprise, so I snuck in a green color for the window trim to evoke that tropical modernism,” she explains. Graphic patterned cement floor tiles, vintage-inspired light fixtures, an enamel bucket sink, and nautical-style mirror all play into the bygone 1920s look.

The master bathroom, however, has a much softer, ethereal Mediterranean atmosphere reminiscent of the Portuguese coast or the Greek Isles. “This is an important room in which the feeling should be relaxing, airy, and serene, so the palette is soft, earthy, and soothing,” says Rose. Here, the walls are plastered in a foggy ocean mist hue, while the arched shower features handmade blue and bone-colored Talavera tile from Puebla, Mexico.

A brand-new shower window reinforces the indoor-outdoor connection the client so wanted. If this is what living in Venice Beach looks like, we want in.

Discover more breezy beach homes we love: This Hamptons Home Starts With a Pink Sofa and Only Gets Better In This Breezy Melbourne Townhouse, Laid-Back Life Is Key The Novogratz Transformed a Montauk Mobile Home Into a Chic Surf Shack