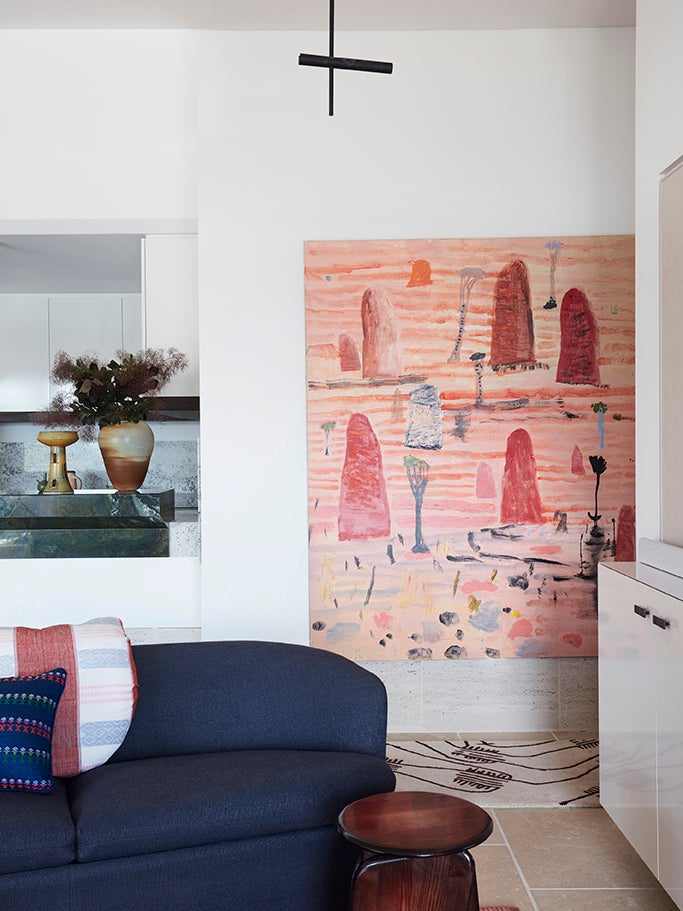 “For seekers of the unconventional.” YSG Studio founder Yasmine Saleh Ghoniem’s catchphrase has pride of place in both her Instagram bio and on her website, where the message dominates the screen in a punchy, all-caps typeface. Previously at the helm of design firm Amber Road, Ghoniem broke out on her own in February 2020 to launch the all-female firm, based in a refurbished hair salon in Darlinghurst, New South Wales. One look at her latest project, a penthouse overlooking Sydney Harbour, and you know that Ghoniem isn’t overpromising. The kitchen peninsula is clad in crocodile green marble; zebrawood veneer runs across the cabinets; and a slab of Calacatta Viola with inky violet veins underscores the fireplace—a gutsy combination that the designer credits to her client’s adamant request for color, as well as to her own upbringing. “My mom’s Australian; my dad’s Egyptian—I grew up all over the place,” says Ghoniem, who spent the majority of her childhood in the Middle East before heading off to Savannah, Georgia, for school. “I had a great chance to absorb my surroundings.”

It may sound like there are a lot of different elements at work, but throughout the gut renovation, Ghoniem was really only juggling two materials: stone and wood. The magic lies in the range of finishes. “I never leave timber as just timber,” she declares. Here, the rising design force walks us through the final touches.

Putting the emerald Vitoria Regia marble in the kitchen was a no-brainer, says Ghoniem: It’s the first room you see when you walk in. But because the slab was pricier than other varieties, she limited its application to the top of the peninsula (the surface guests will interact with the most), going with a durable granite for the other countertops, and layers of pitted travertine and plasterboard for the base of the structure. “The platform provides a place to throw your keys down,” says Ghoniem. Directly across from the kitchen is the bar, where unhoned, unpolished Cosmic Black granite resembles the texture of worn leather.

Following her client’s ask for color (their worst nightmare was a white sofa), Ghoniem leaned heavily into pink, beginning at the front door with a peach-toned inlaid panel. The hue also makes an appearance in the kitchen in the form of a fuchsia faucet and dark rose pantry door handles. “I pick wood purely based on how it picks up stain,” says the designer, and a blond option like Victorian ash absorbs tint with no trouble. Ghoniem kept the palette going by translating it to fabrics (sconce shades in the guest bedroom) and metals (armchair legs in the living area).

Custom designing cabinet hardware is Ghoniem’s guilty pleasure. To add warmth to the lacquered upper fronts in the kitchen, she lined the bottom edges with walnut and incorporated chunky notches that are easy to curl your fingers around. In the living room, oversize ash pulls beckon from the built-ins. What might seem like a superfluous detail is actually a clever distraction—you don’t realize the cupboards are a tool for concealing the television.

Old gray carpeting used to run throughout the circa-1990s apartment, but now limestone pavers lead the way. (The designer gave the flooring a “slightly more European flavor” by expanding the thick grout lines.) Another design constant? A 17-inch-high baseboard (or skirt, as Ghoniem calls it) carved out of unfilled travertine. The band determined the height of the other joinery details in the space, like the zebrawood veneer that wraps around the bar. “The ceilings are incredibly tall,” says Ghoniem. “That afforded us a lot of room to play with linear dimensions.”

Rather than spend a chunk of the budget redoing the guest bedroom, the designer updated the existing paneling around the nightstands by swathing two of the inset boards in Pierre Frey’s character-packed La Smala fabric—the same textile used to make the undulating S-fold drapery. Ghoniem’s intention was to carry the illustration onto the headboard, too, but sensing the allover graphic would be overkill, she opted to switch up the scale. The company’s intricate Okinawa print covers the surface instead. “The tinier the space, the more detailed it has to be,” says Ghoniem. “It has to perform so much harder than a larger home.” This one gets the job done, and then some.