This Cheeky Pink Bathroom Used to Have Wall-to-Wall Carpeting 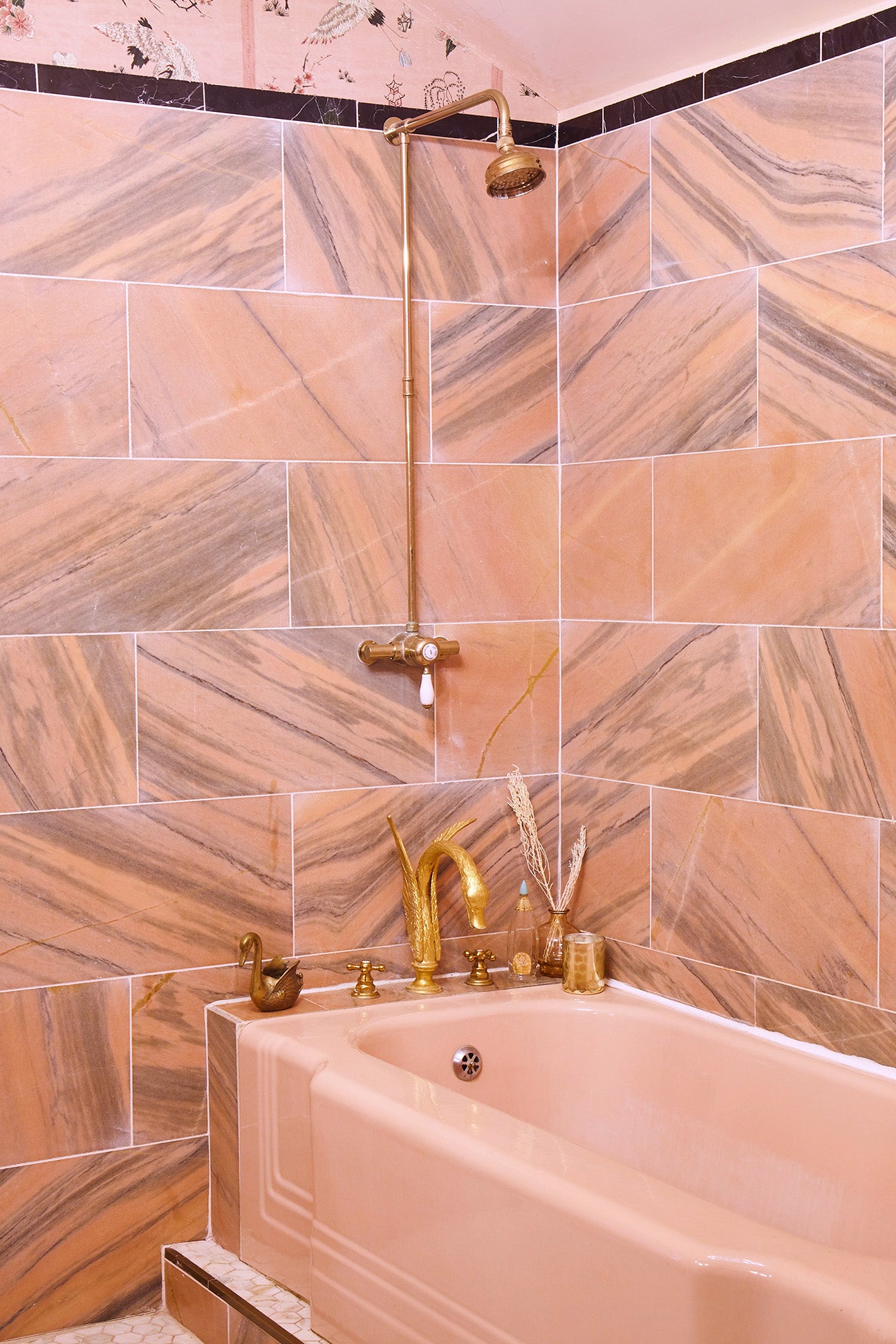 Whinnie Williams bought the tiles for her master bathroom two years before she had a place to put them. In this case, the egg (the pink marble she scored on eBay) came before the chicken (Williams’s dream home in England’s Margate, Kent, which she shares with her boyfriend, music video director Tom Dream).

When the couple bought the home in 2016, the bathroom was in a rough spot: There was wall-to-wall carpeting, the windows were made of plastic, and a small fireplace soaked up usable square footage. The DJ-turned-designer swapped out those dated elements for a different kind of old school. Fringed sconces, gold swan-head taps, and chinoiserie-inspired wallpaper now evoke the same cheeky, ’70s disco aesthetic her London-based interiors company, Poodle and Blonde, which she cofounded with Kierra Campbell last year, is known for. “One day, I want to add turf to the ceiling and put tortoises on it,” says Williams, laughing. Here, the designer takes us inside the groovy remodel.

Williams is a big fan of themes. “My master bedroom is all shells,” she shares, noting that her scalloped headboard was the “find of the century.” Upon discovering the gold swan faucets on eBay (each approximately $50), she decided the space needed to be about birds. Williams hunted down matching swan wall sconces and sewed fringe to the clip-on shades. London’s exclusive Annabel’s Mayfair Club might have put swan hardware on the map (similar-looking ones line the onyx sinks in the women’s restroom) in 2018, but Williams beat them to the punch.

A second nod to our feathered friends came in the form of wallpaper. “The print was inspired by Japanese storks delivering babies, but if you look closely, you can see they’re actually carrying takeout boxes,” she says. The pattern, aptly titled Food Babies, is a part of Poodle and Blonde’s newly launched Pavillion collection. Williams hand-stitched the pattern onto fabric (a process that took three long weeks) before transferring it to silk wall panels. Identical curtains add welcome softness to the sleek, shiny tile and sink.

With a clear vision in mind and her pink tiles already in hand, Williams could look past the cosmetic woes. The floor plan, however, was another story. A fireplace and boiler took up a huge chunk of the space, leaving just enough room left over for a petite shower. “It was so much smaller than it needed to be,” says Williams. To square off the room, the designer moved the boiler to a cupboard in the next room and removed the hearth completely. She also replaced the old plastic window with wood doors, expanding the frame so it leads directly out onto the roof.

advertisement
“One day, I want to add turf to the ceiling and put tortoises on it.”

At long last, it was time for the stone to go in. While the smaller cuts were infinitely cheaper than one giant slab, Williams wanted to outline a pyramid shape over the sink with thin black tiles. The installation was tricky. “The length of the marble was wider than normal, so it was difficult to fabricate strips of tile that matched—I think my builder hated me,” she jokes. “I was determined to create symmetry.”

For most renovators, the end goal is a place that’s shiny and new. But for Williams, the opposite was true. In lieu of a sparkling white claw-foot tub, she found a blush one from the ’80s—it’s petite but the perfect size for one person. She scoured eBay once more until she found a matching set of aged brass shower fittings for a total of $330. There isn’t a grand his-and-hers vanity, but rather a sculptural sink with an antique chest for storage next to it. Not pictured: the vintage Murano glass chandelier that was a birthday present from Dream. “He knows me well,” she says.

If Barbie had a thing for avant-garde wallpaper and vintage lighting, this would be her favorite room in the house.

See more stories like this:  Steam Sauna or Tiled Ceiling? This Emerald Green Shower Has Both You Can Watch the Sunset From This Totally Open Terrazzo Shower Poppy Delevingne Just Revealed Her Quintessential British Bathroom