Renters, You’re Only $20 Away From a New Bathroom Vanity 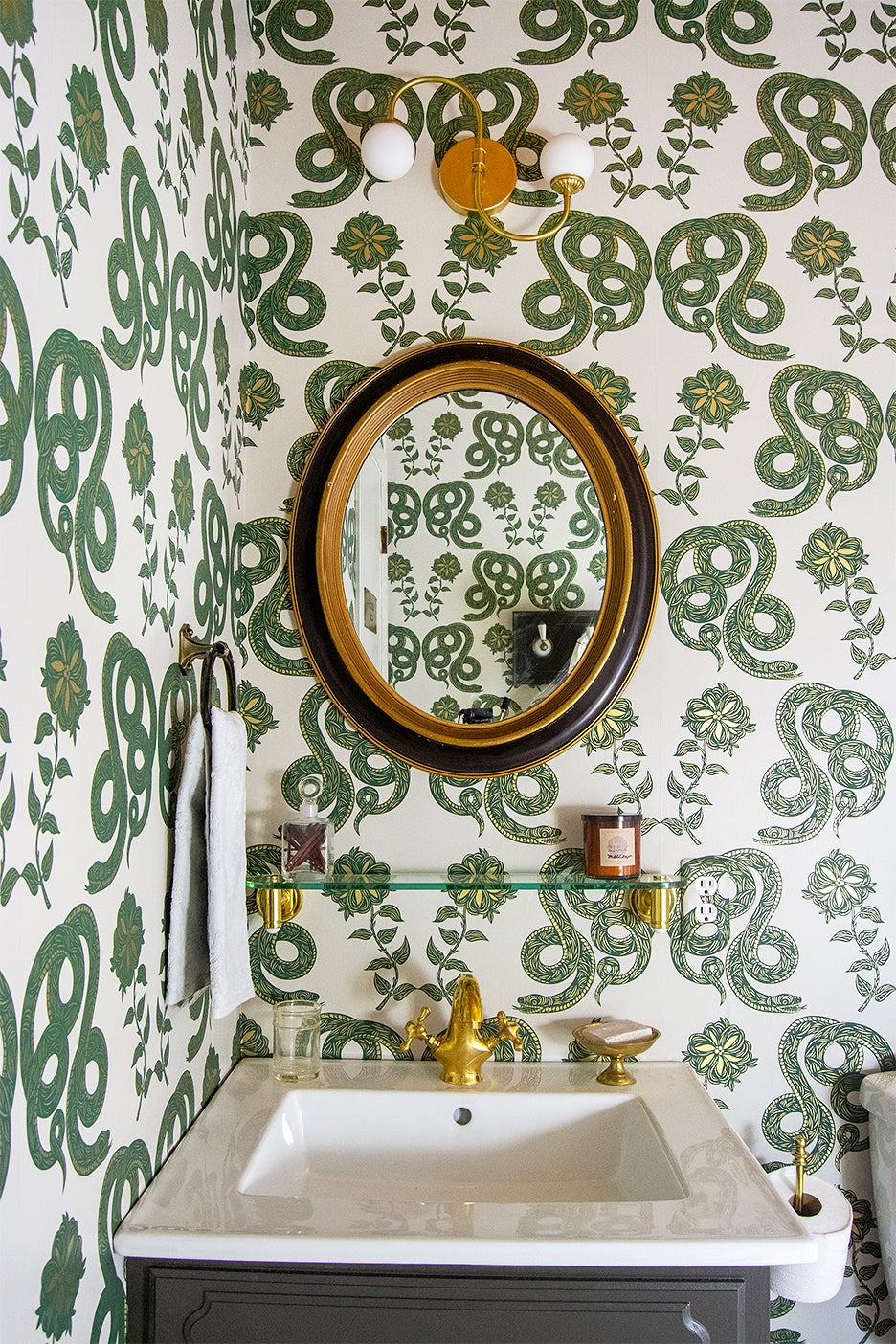 Since 2018, designer Katherine Thewlis has used a multitude of clever DIYs to modernize the circa-1970 ranch-style rental she shares with her husband and daughter in Johnson City, Tennessee—with her landlord’s permission, of course. She’s dressed up the kitchen peninsula in three-dimensional pink tile, spray-painted her bathroom’s exposed pipes gold, and given the living room walls a verdant refresh, to name a few updates.

The $2,300 guest bathroom redo, however, is her home’s undisputed showpiece, thanks to its striking Hygge & West Serpentine wallpaper and the story behind why Thewlis chose the motif. “My family and I were vacationing in a cabin this summer, and a snake slithered down the living room wall right next to my dad!” she says, laughing. “Now I have snakes on my bathroom wall as a sort of therapy for my PTSD.”

Thewlis knew she would need more than a bold print to revive the outdated bathroom, so she didn’t stop there. In fact, she spent two months ridding it of all its unstylish accents, from the medicine cabinet that kept falling off its hinges to the dizzying grid of red grout in the shower. “This room now feels like somewhere I want to be,” says Thewlis. 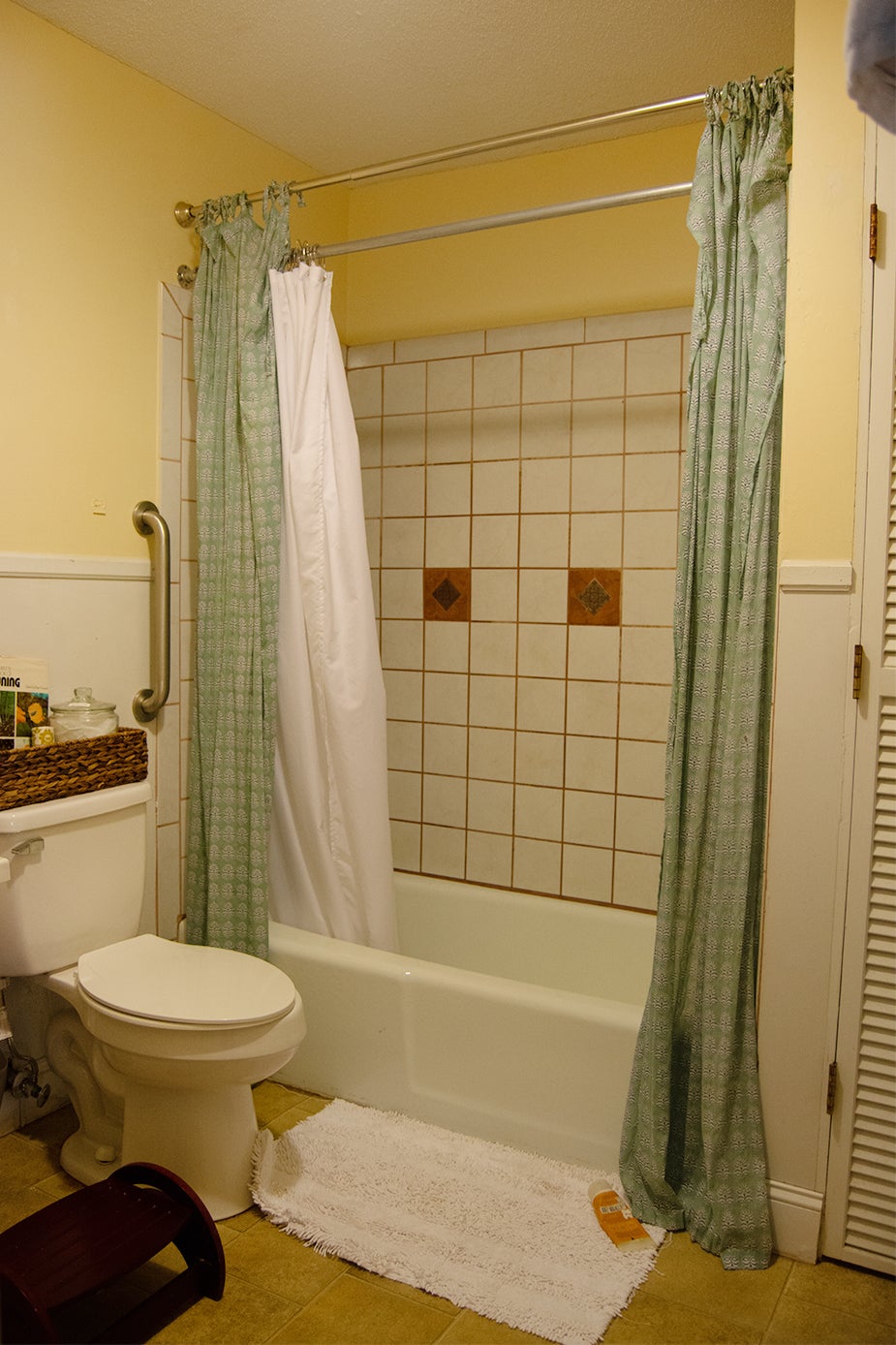 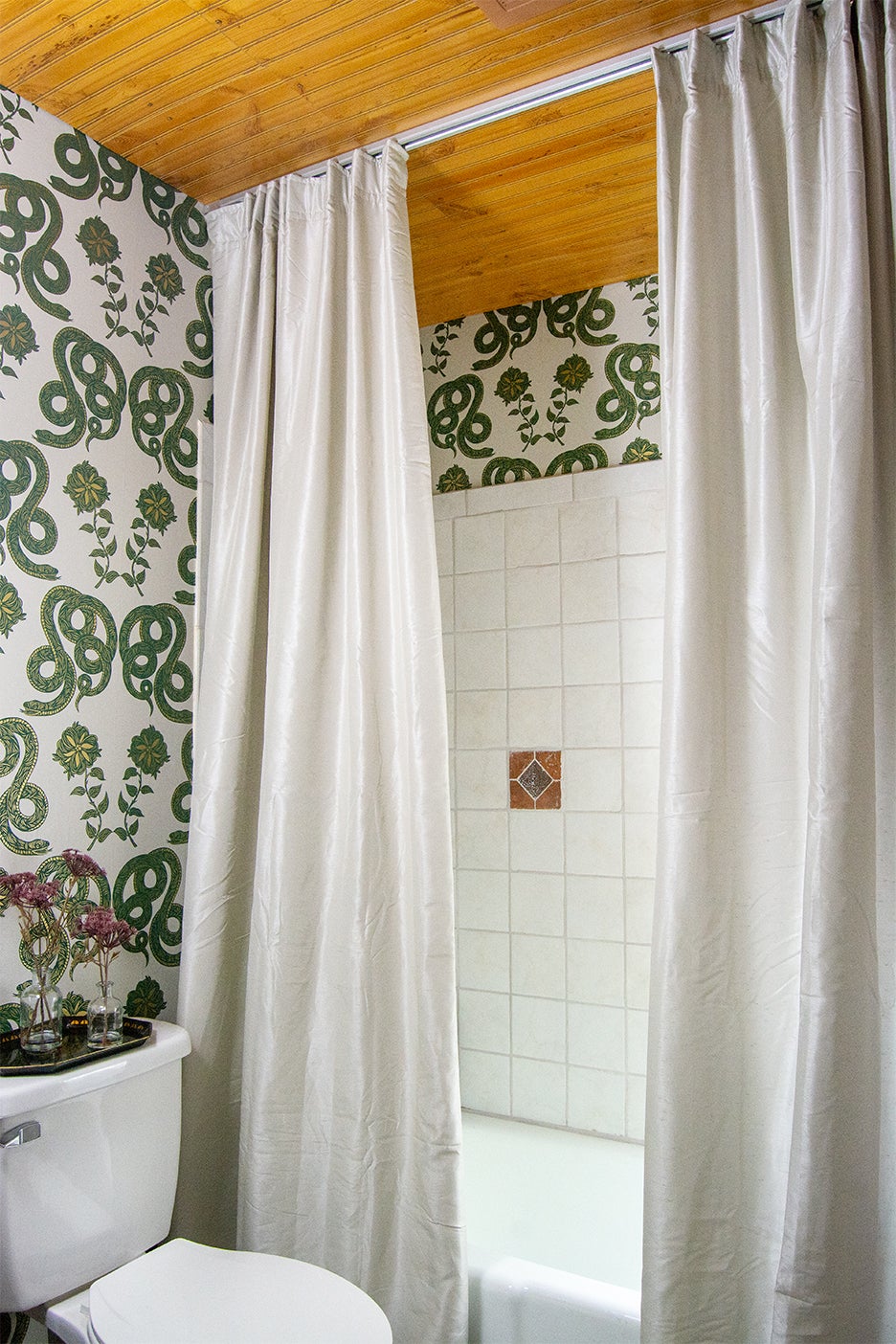 Thewlis sealed the existing vinyl floor and covered it in gray penny round tile with light grout to give the bathroom a visually quiet base. What to do with the leftover filler? Apply it on top of the red lines in the shower to help downplay its sun-baked Tuscan style. “This was easy,” says Thewlis. “It was a wax-on, wax-off process and only cost $17.” 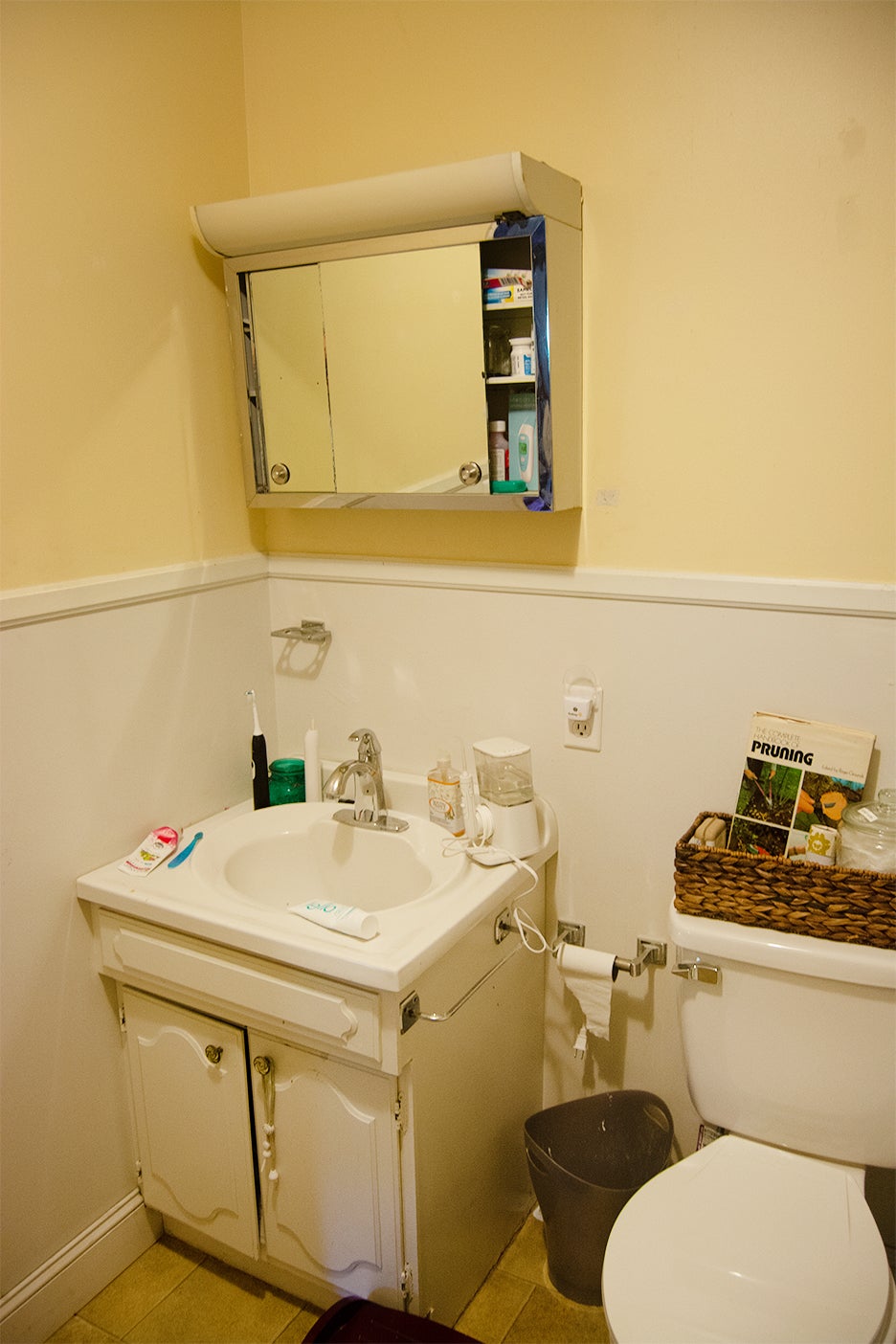 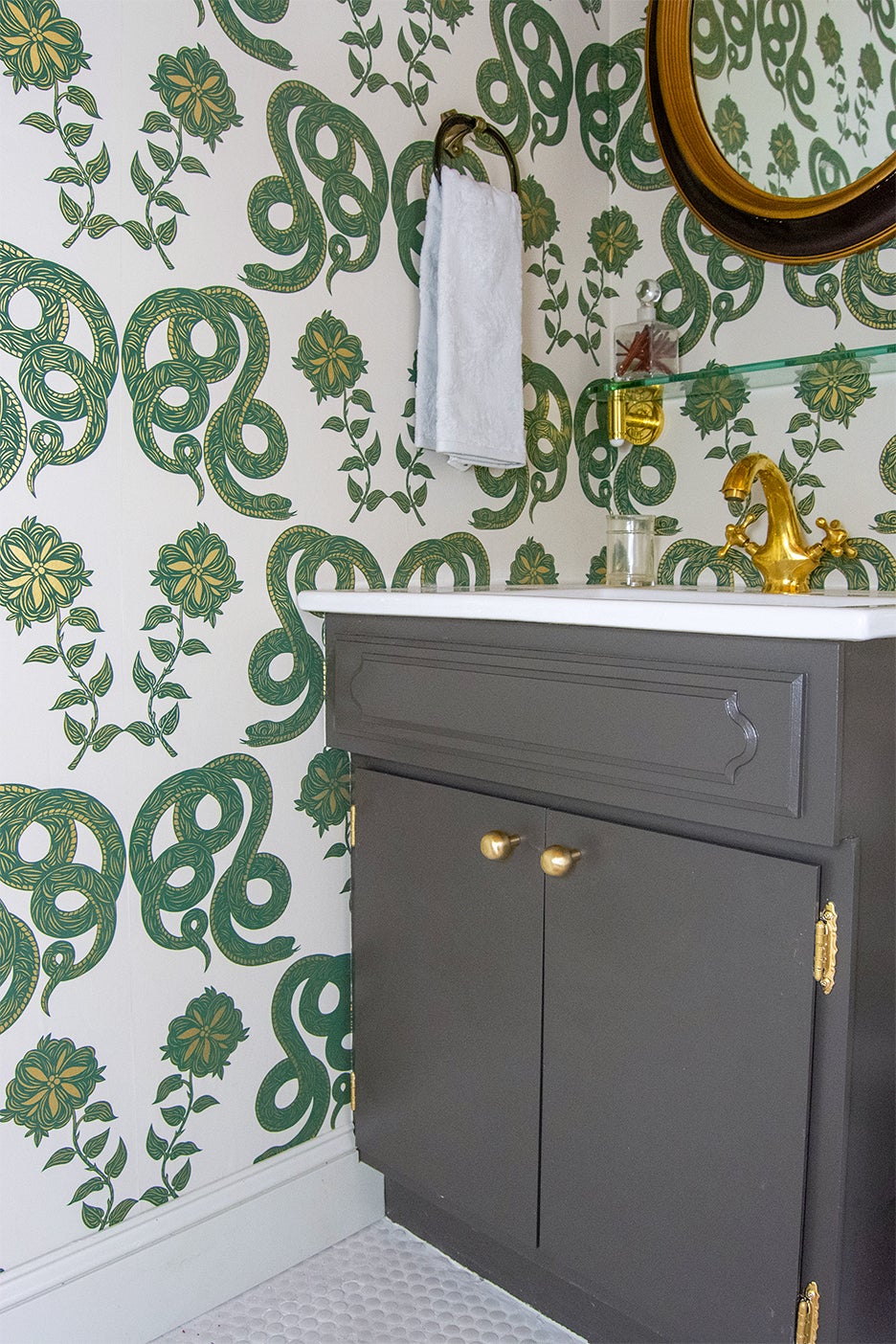 “Vintage cabinetry is usually of a higher quality than today’s products,” Thewlis points out, so instead of replacing her retro vanity, she modernized it by simply turning its cottage-style doors inside out. To pull off the switch, she removed the two doors and drilled holes to house new knobs on their other side. She then filled in the old hardware marks with Spackle and coated the doors in Sherwin-Williams’s Urbane Bronze. A $5 gold leaf paint pen gave the original hinges a brass feel. It sounds exhaustive, but the project only took 30 minutes to pull off (not counting paint-drying time). 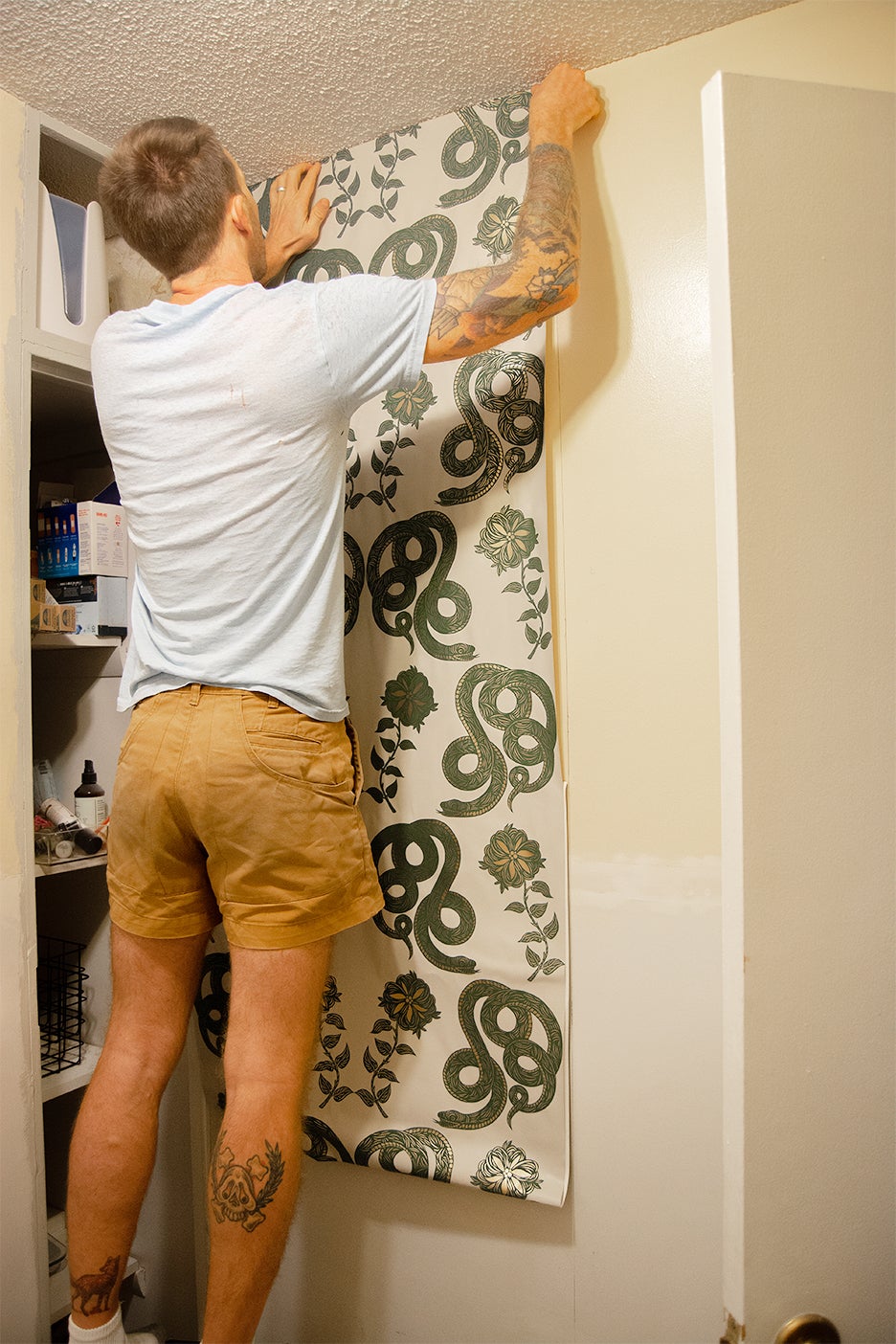 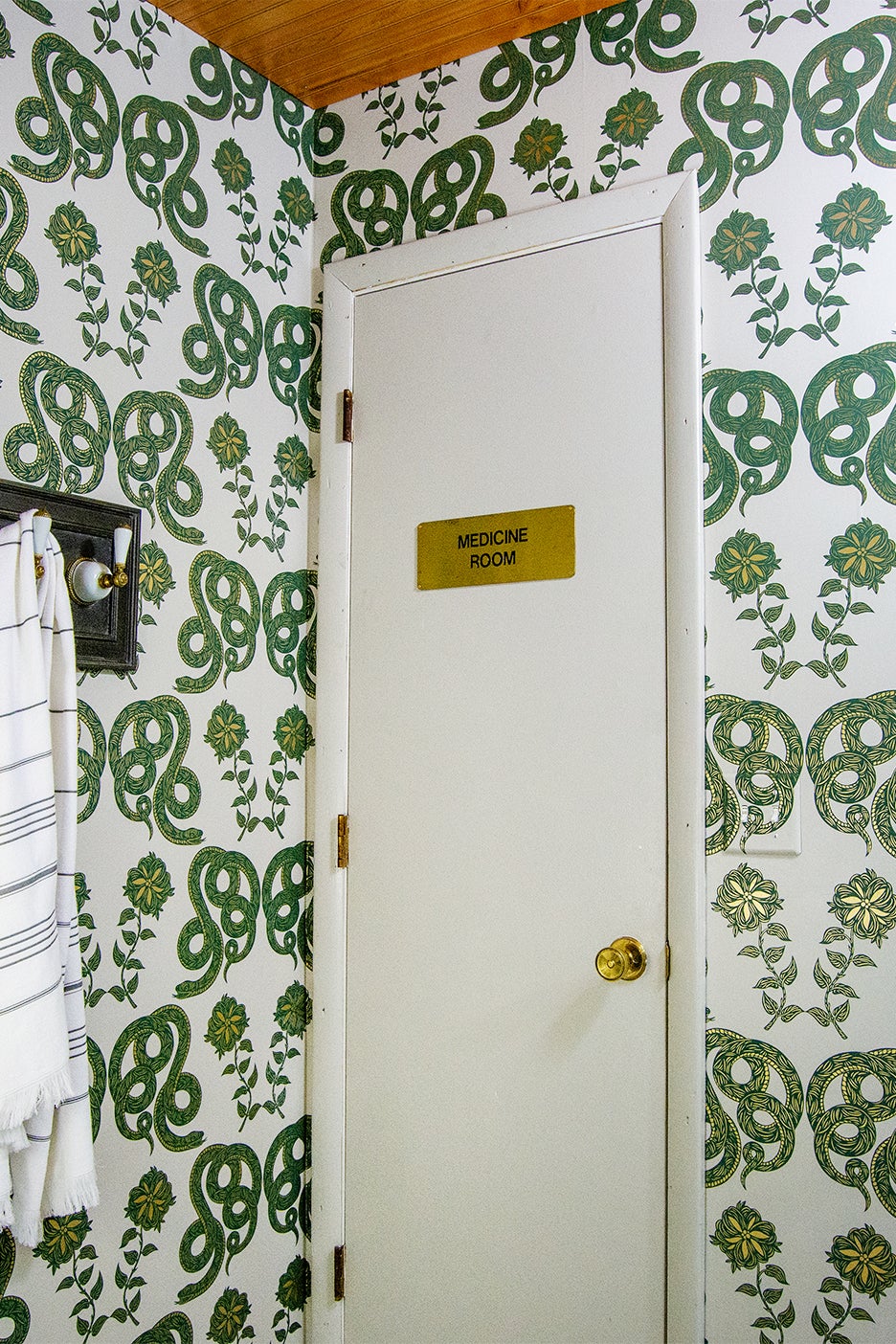 Thewlis has installed her fair share of wallpaper—from traditional to peel-and-stick—and she highly recommends using the former. “It gives you some time to reposition it as it isn’t super-sticky,” she explains. Peel-and-stick, on the other hand, “tends to latch onto itself, your hair, and anything else.” No matter your choice, Thewlis suggests checking with the manufacturer before installing wallpaper in your bathroom to make sure it’s water-resistant. And don’t forget to leave the door cracked and run a mini dehumidifier or your exhaust fan while showering to prevent moisture damage.

A Promotion for the Popcorn Ceiling

Thewlis topped off her design by disguising the bathroom’s dingy popcorn ceiling with $100 worth of waterproof, tongue-and-groove wall paneling, which she attached to the ceiling studs using discrete brass screws that blend into the grain. “It’s not perfect—there are seams—but it adds so much warmth to the room,” she says of the results. “I used to be so embarrassed to show guests to the bathroom, but now I’m all, ‘Come in here and let’s hang out!’” 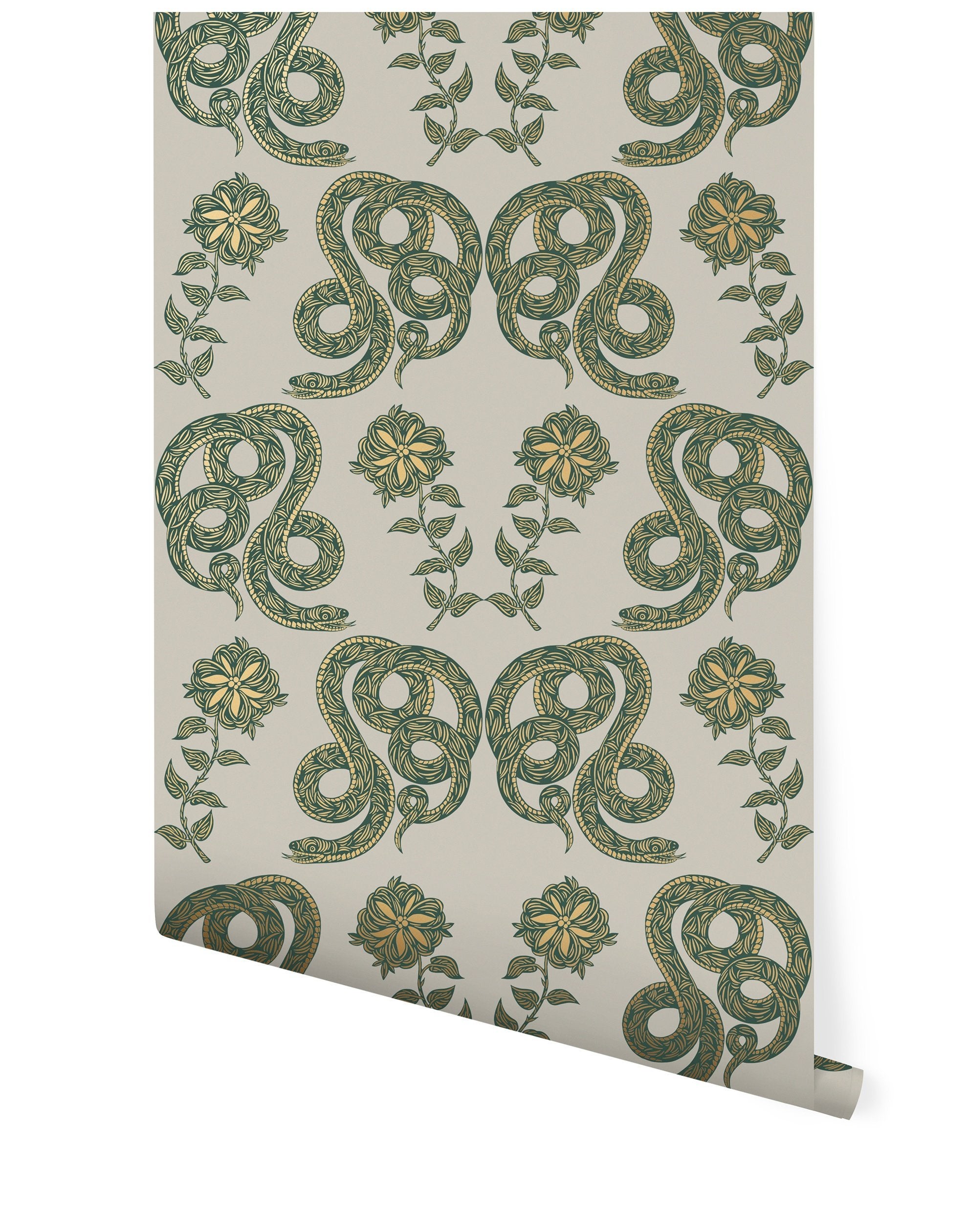 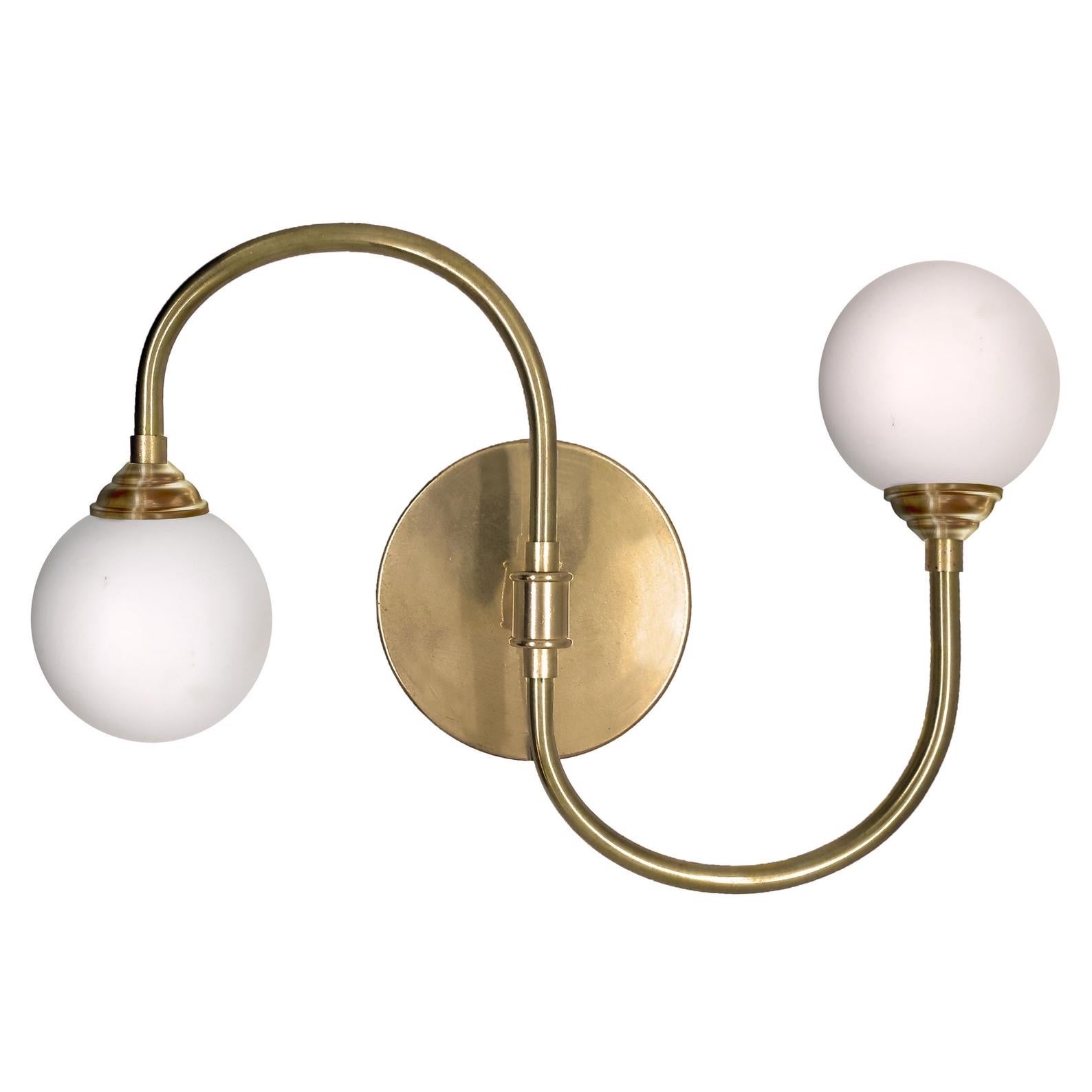 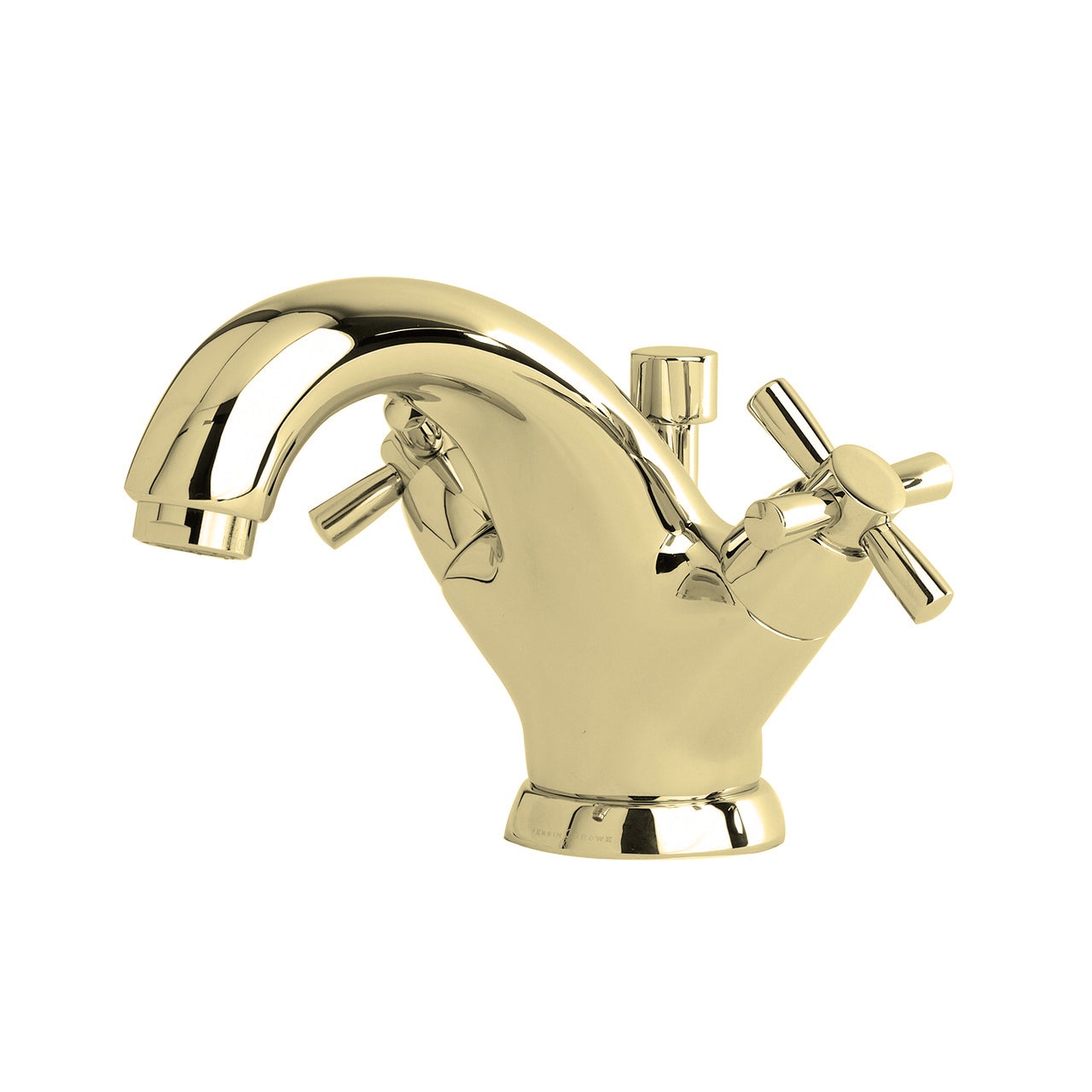 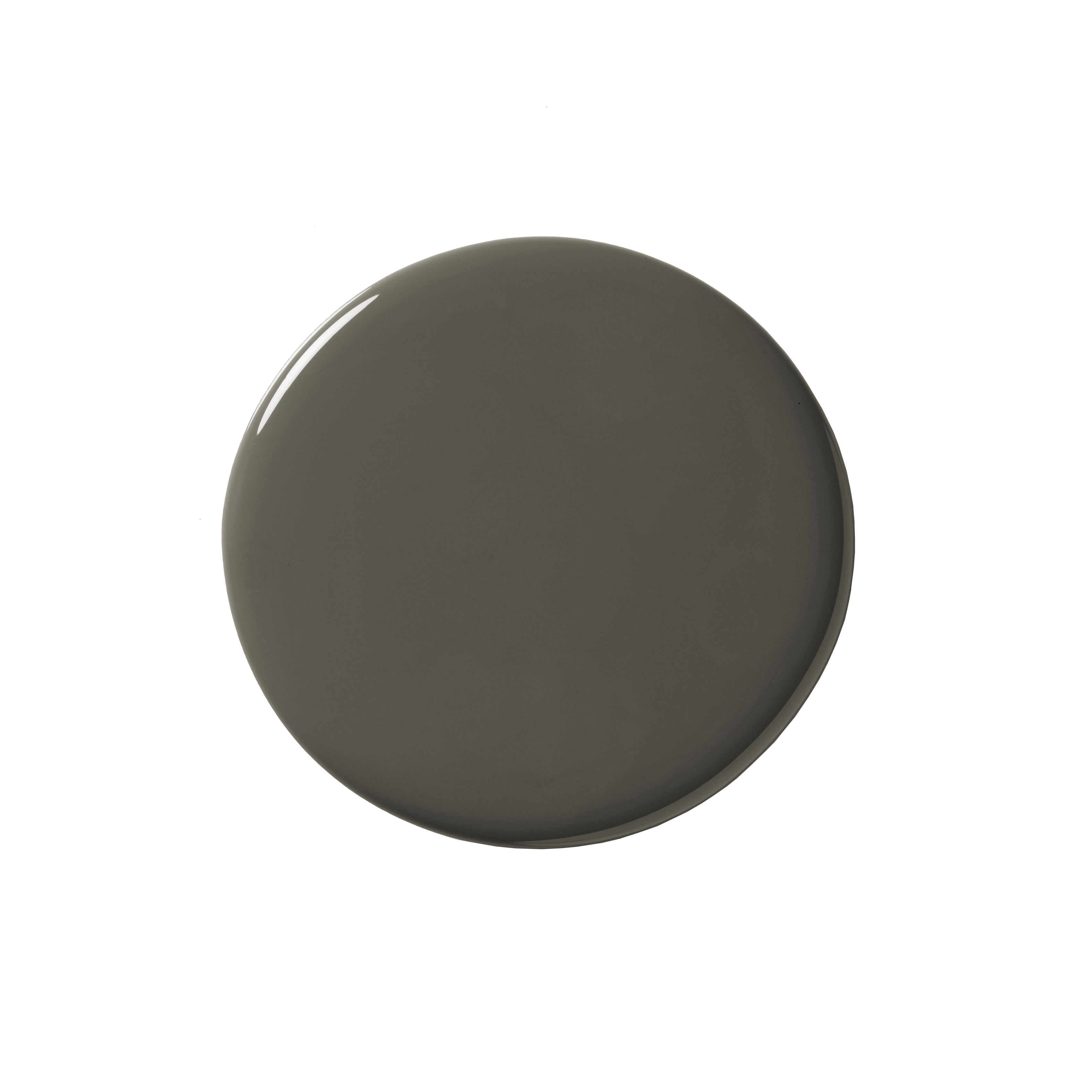