With the help of Target, Urban Outfitters, and West Elm. 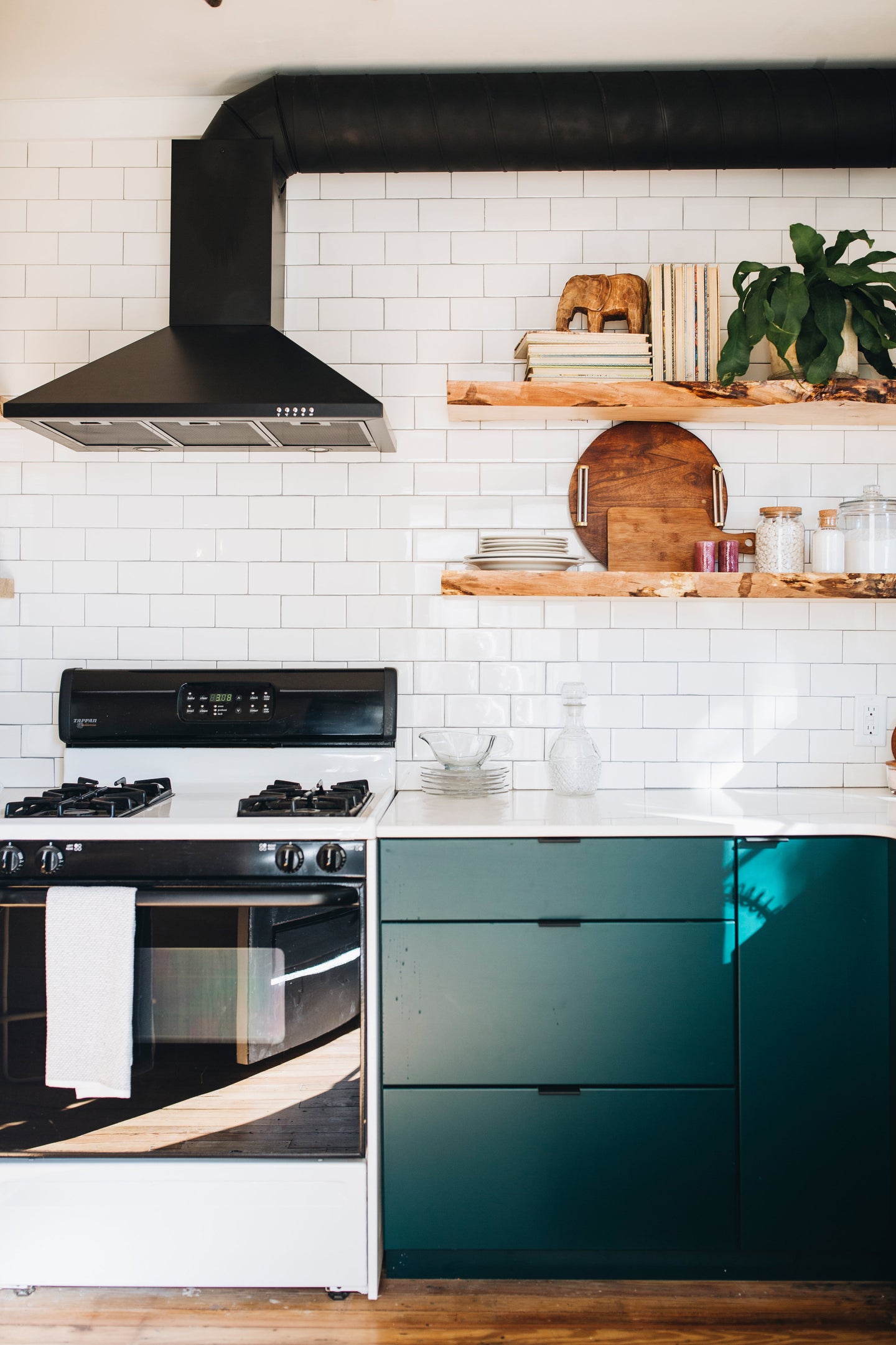 When seasoned renovator Claudia Beiler set out on updating an old, worn-down row home in Lancaster, Pennsylvania, she had an internal voice screaming at her not to do another all-white kitchen. She listened, closely, which is how she ended up with a matte forest green color from Benjamin Moore for the cupboards. “It was a risk at the time, but looking back, it was the obvious choice,” she says, adding that she believes the bold hue is what eventually sold the house (Claudia and her husband, Chris, refurbish and list homes for a living).

As with almost every property they take under their wing, they jumped into the Walnut Street project completely blind. The house had been abandoned for quite a few years, yet even after refinishing the 100-year-old floors, replacing the electrical and plumbing, and adding new structural supports, the Beilers’ all-in budget came in under $100,000. “I mostly just want to inspire people to create homes that reflect who they are as people,” shares Claudia. In this case, that meant dedicating time to painting, sanding, and staining the new kitchen cabinets and shopping sales at Urban Outfitters and West Elm. Here, the designer takes us inside the restored sun-filled home and shares a few wallet-friendly decorating ideas along the way.

Turn a Nightstand Into Your Dream Vanity

To skirt the cost of a fully custom vanity, the couple converted West Elm’s Penelope nightstand. A vessel basin (one that sits on top of the counter rather than flush with it) works best for this, as it won’t interfere with the drawer hardware. A good rule of thumb: The final measurement from the floor to the rim of the bowl should be around 36 inches. The mid-century–inspired piece warms up the black-painted tub and plays nicely with the two-toned Quiet Town shower curtain.

The pair had originally intended to tile the bathroom all the way to the ceiling, but when they discovered remnants of old wallpaper and plaster, they decided to turn the walls into a statement feature. “We did our best to make it a beautiful museum piece that was also functional,” says Claudia. The couple protected the treatment with glass.

Mix Up Your Go-To Brands

In the bedroom, both the tufted headboard and matte black sconces were sourced from Urban Outfitters Home. The daybed downstairs also came from the retailer. Claudia displayed it near a dining set from West Elm and hung shibori-inspired prints from Target on the wall.

“I’m careful not to incorporate too much of one store into a space,” she says. To break up the mix, she hunts for older objects at auctions and yard sales. Then she’ll do things that are 100 percent her, like take a bunch of pages from old musicals and tape them to the wall to make a collage. “I wasn’t allowed to do much to my room growing up,” she explains.

It didn’t take long for the Beilers to find a buyer. This house went to a teacher who now gets to come home after school and cook in a beautiful green kitchen and unwind in a lovingly restored bathroom. “Home is where it’s at, and home is why we do what we do,” says Claudia.

This story was originally published on May 15, 2019. It has been updated.

See more stories like this:  This Hamptons Home Starts With a Pink Sofa and Only Gets Better This Marin County Home Proves That Dark Paint Colors Are Anything But Gloomy This Spanish-Inspired Home Features a Secret, Sun-Drenched Courtyard