The Master Bathroom in This Boston Home Breaks All the Rules 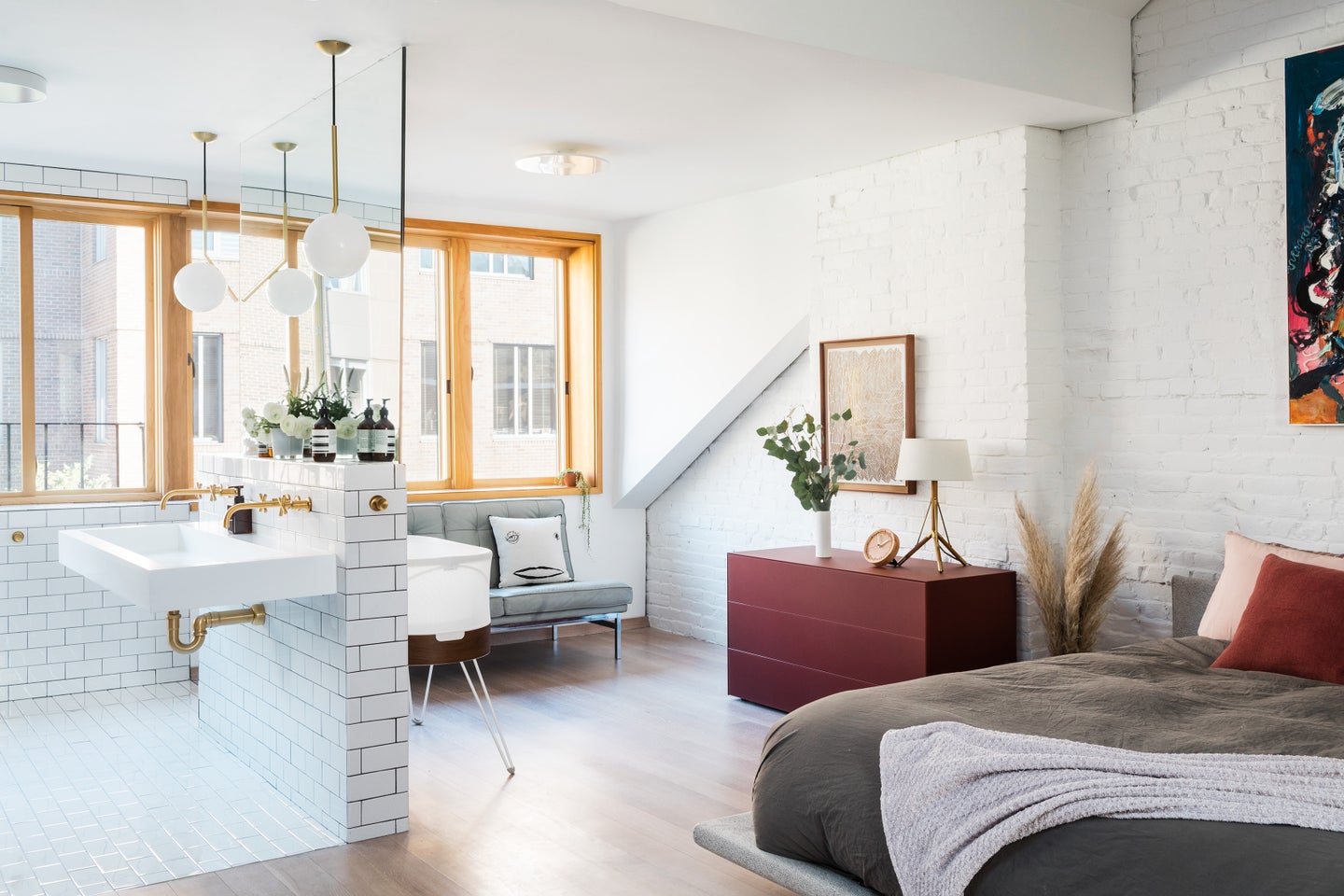 Artist Nadège Roscoe-Rumjahn and her husband Michael Mee’s renovation journey began when they decided to switch up their dog-walking route. “We like to joke that the house found us,” says Roscoe-Rumjahn. Down an unfamiliar side street in the South End neighborhood of Boston, they stumbled upon a charming block of brick townhomes. An investigation ensued, and they learned from a real-estate-agent friend that one was for sale.

“It was already half gutted,” remembers Roscoe-Rumjahn. “We wanted to transform a space with history, but at the same time I hate going into a place and just carrying things out for the sake of changing it.”

Almost every upgrade the couple, alongside architect and fellow Montreal native Matt Litvack, made to the 2,500-square-foot home revolved around maximizing the natural light. They added a skylight and opened up the staircase so that sunshine would trickle down to the first floor, but also made some less obvious design decisions, like not adding any doors to the master bathroom (a terrifying notion for anyone who relishes their privacy). “Closing it seemed counterproductive when we had just opened everything up,” says Mee. “It’s amazing how bright the house is without any lights on.”

The open-door policy isn’t the only feature we love about this quirky-cool home. Read on for six other unexpected ideas we uncovered along the way.

One of the biggest structural changes was adding the concrete floor in the kitchen. “When you pour concrete, you need something pretty sturdy to hold it up,” says Roscoe-Rumjahn. As in, lots of expensive steel. Fortunately, she comes from an architecture background, so the cost, no matter how hard to swallow, wasn’t too much of a shock.

advertisement
“I hate going into a place and just carrying things out for the sake of changing it.” —Roscoe-Rumjahn

PaperStone countertops, a surface material crafted from cast resin and recycled paper, keep the industrial vibe going. “It wears a lot more like a chopping block, so it gets a nice patina,” explains Roscoe-Rumjahn. For early-morning breakfasts with their 6-month-old daughter and impromptu wine and cheese nights, they added an addition to the island topped with a hardy marble.

Use Little Details to Tie Everything Together

It may not seem like there’s much of a barrier between the sleeping quarters and the bathroom, but look again and you’ll notice a thin, double-sided mirror between the vanity and the sitting area.

Brass lighting and hardware in the bathroom repeats in the bedroom in the form of a stick-like light fixture by Montreal-based company Lambert and Fils, helping to smooth the transition.

advertisement
“Closing [the master bathroom] seemed counterproductive when we had just opened everything up.” —Mee

The couple’s existing Piero Lissoni bed made their search for compatible bedroom furniture difficult. Traditional nightstands were way too high and disrupted the line of vision. It took a few years, but eventually they found the perfect fix: two maroon push-to-open dressers by Glas Italia. “They frame that chimney detail really nicely,” says Mee. “We liked that luminous brick tone against the white painted walls.”

Make Bath Time a Breeze With a Sunken Tub

In the guest bedroom, a large, frameless CB2 mirror, chosen for its simplicity, bounces the sunlight streaming in from the new windows around the space. Visitors can take the bright and airy feel one step further by sliding open the pocket door to the bathroom. “When you’re in the bedroom, you can peer through the bathroom windows,” says Mee. At that point, guests are only one short step away from sinking into the tub—it’s conveniently set directly in the floor.

Turn a Staircase Into a Work of Art

Roscoe-Rumjahn’s La Douzaine textiles and works on paper can be found throughout the house and, of course, downstairs in her basement studio. Even the stair banister displays her creativity: The side of the handrail is printed with one of her herringbone motifs.

Mix and Match Your Dining Chairs

An assemblage of Living Divani’s Grace chairs sit around the Gubi 2.0 dining table. Each seat boasts the same basic steel frame but is dressed up a bit differently: One wears a cape of sorts, while another’s sides are extra-high and cocoon-like. “Because I work in textiles, we liked that they had their own costumes,” says Roscoe-Rumjahn. A game of musical chairs is inevitable.

See more home tours:  The Green Marble Kitchen in This Melbourne Home Has Stolen Our Hearts A Calm Connecticut Home Filled With Blue Hues and Eclectic Art An Ombré Staircase Is Only the Beginning in This Colorful Ohio Home