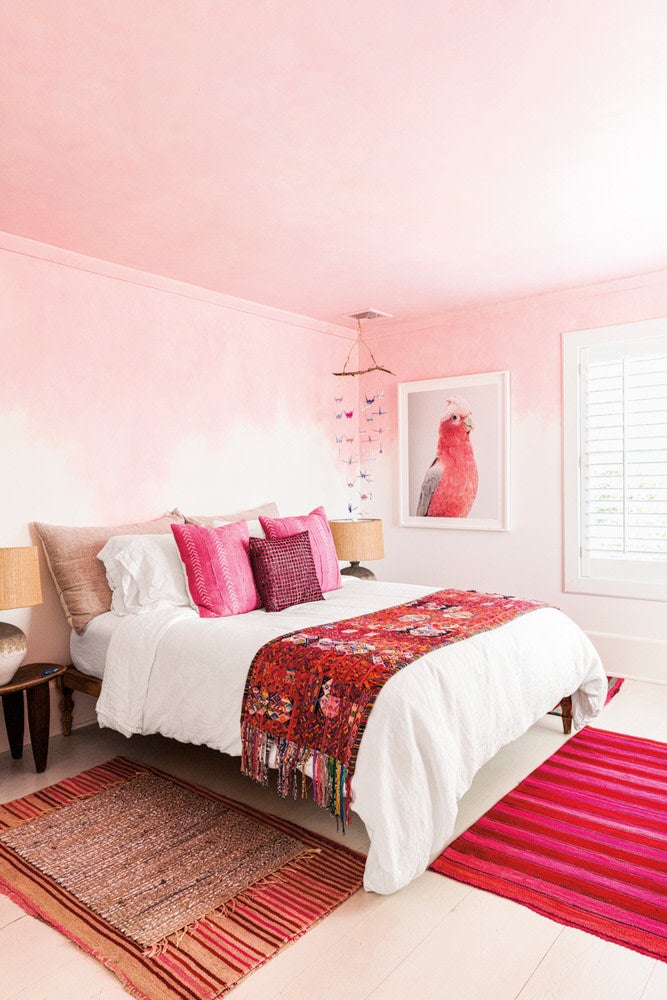 “I grew up in a house where the living room was sort of austere and off-limits,” says Laura Grabe. “I want kids to feel comfortable everywhere.” So when the mother of three and cofounder of El Co, a party caravan she jokingly refers to as “the canned ham,” landed in the sleepy village of Rowayton, Connecticut, formality was the last thing on her mind. The five-bedroom home—which she shares with daughters Isla (6), Willow (4), and Vesper (2)—is the ultimate coastal retreat.

An avid art collector, Grabe (who also cofounded Flea, a now-shuttered mecca for vintage finds and repurposed crafts) hails from Westport, just a few miles away. But she prefers the low-key vibe of Rowayton, a “blink and you’ll miss it town,” with its tiny market and even smaller community. “I can stick my hand out the window and offer my neighbor a glass of wine,” Grabe says, laughing. She purchased the property in 2013, with the goal of making the home as “modern, simple, and clean” as possible.

The dream was to build a Mexican-style “cement box,” but given building restrictions and the cost of materials—plus Rowayton’s snowy winters, which make owning a flat roof untenable—she settled on a traditional Colonial with huge windows, the better to maximize views of the Long Island Sound.

“We’re on the mouth of a five-mile river, so there’s a lot of boat traffic in the summer,” says Grabe. On most days, her kids clamber over an outcropping of rocks in search of old marbles and sea glass.

“I grew up in a house where the living room was sort of austere and off-limits. I want kids to feel comfortable everywhere.”

Inside, the home reflects Grabe’s love of found objects and cutting-edge art. The master bedroom features a platform bed created by her builder, Bo Malpass, made of reclaimed hemlock wood and a collection of seascapes so ugly “they’re almost good,” says Grabe.

The criteria for most of them was simple: “Just beach, no lighthouses, no birds or boats, and you can’t spend more than $60 on a painting.” They crack her up constantly, especially when she looks out her window and sees the real thing.

On another wall, a blue and green painting proclaims “It Ain’t Easy.” The apple-picking ladder was a flea market score, and the factory pendant lamps were found at a junk store in Hudson, New York. Throughout, the home is peppered with contemporary art sourced by Sarah Cetrulo, a close friend and the owner of Trove Art Advisory in Darien, Connecticut.

“Laura’s not interested in any kind of art you can see in someone else’s house or store,” says Cetrulo, who sought out pieces with personality—like the Donald Martiny abstract sculpture Beothuk hanging over the living room fireplace, which resembles an “enormous brushstroke and ocean wave all at once,” and Eric Blum’s Untitled No. 684, composed of ink, silk, and beeswax, in the mudroom.

The rest of the rooms embody Grabe’s laid-back aesthetic and her abiding love of blue (each of her daughters has a different shade for her middle name: Isla Blue, Willow Indigo, and Vesper Teal). Set against a neutral backdrop—“grays and whites lend themselves to anything,” according to Grabe—blue mainstays like a velvet sofa by Vladimir Kagan or a rayon and canvas work by Nike Schroeder evoke her free-spirited nature.

This ability to breathe new life into old objects is on full display with El Co, the Spam-shaped trailer Grabe found on eBay last June with her business partner, Laura Jayson, that sits parked in the driveway. After plans for a restaurant space fell through due to permit restrictions, they decided to rent out the caravan bar for parties and weddings.

Together, they “took it down to the skin,” ripping out the bed, kitchenette, and stove, then adding windows and cedar shelves for a veritable bar. “The trailer becomes the party,” says Grabe.

The same is true of her home: “It’s very relaxed, and I love that people drop by all the time. A million kids are here who aren’t my own.”

This story originally appeared in the Summer 2018 issue of Domino with the headline “Into the Blue.”