Side note: We're bookmarking every wallpaper. 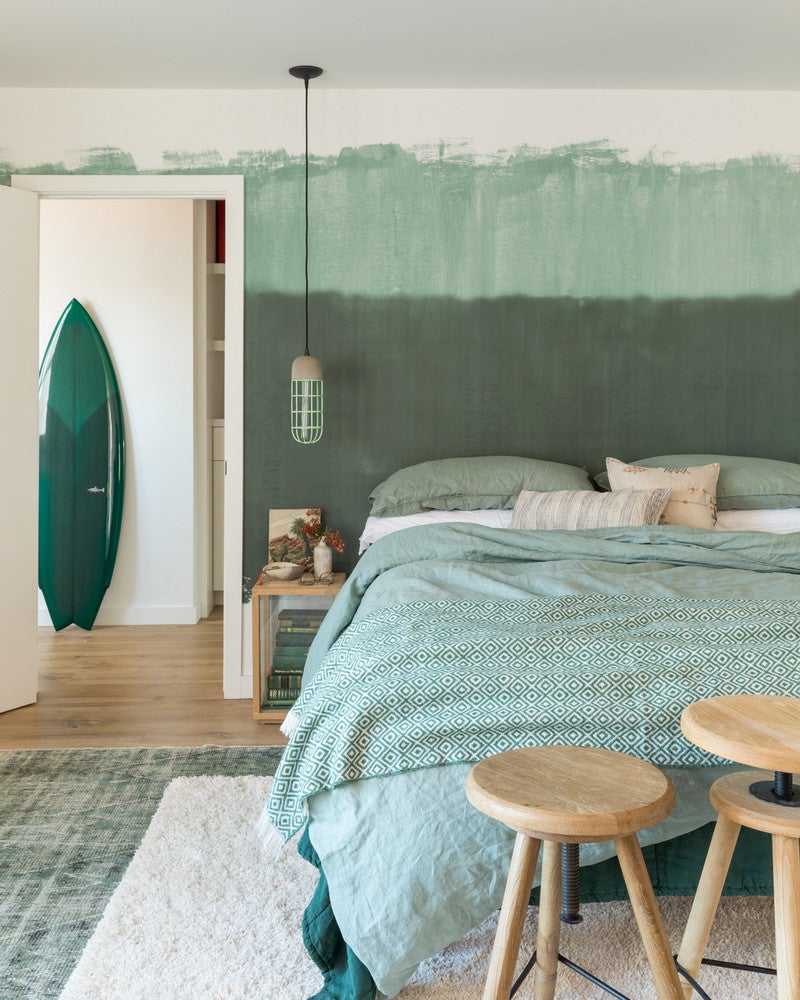 You know when you find the perfect gift for your friend, only to regret having to give it up when you realize how much you actually wanted it for yourself? That’s what happened with this Newport Beach home. Designer Raili Clasen originally purchased the 2000-square-foot Spanish-style home as a flip, only to fall in love with the space halfway through and decide to make it fully her own.

This may be because it was truly a labor of love. Now dubbed the “Spanish beach bungalow,” the initial space was a far cry from the clean yet color-filled house you see here. In Clasen’s own words, it was “in such bad shape, gross, and not somewhere you even wanted to walk in to.” Over the course of a year, she did a total gut reno, updating the cheap tile flooring, opening up the space and adding new drywall.

Halfway through this gut renovation, something shifted; suddenly, the project was personal. “When you’re doing your own house, it’s like a laboratory,” explains the designer. “You can use those things that clients sometimes aren’t up for. It’s easier in the sense that I don’t have to get approvals, but it’s harder because I’m all over the map. Here, as some of my laboratory experiments were coming to fruition, I started really liking it. When we were about three-quarters of the way done, my husband and I did a walk through and looked at each other like, we are for sure moving here. It just started feeling like us.”

With four bedrooms and four bathrooms, the deceptively small space certainly doesn’t look it. There are punchy wallpapers and oversized light fixtures in practically every room; it completely ignores the “minimal-is-best” trope most people follow for smaller homes and proves that you can go all out with limited square footage. A big part of the home’s personality has to be the wall coverings. From murals to art to wallpaper, every square inch is interesting, and every room is different.

A 20-foot-wall in the hallway, which initially drove Clasen crazy (her words, not ours), went through several iterations before it became the statement-maker it is now. She thought about mounting 30 bikes on the wall as an art installation of sorts before coming across a local surf artist Matt Allen on Instagram. Allen had posted a much smaller scale of a similar “Count Your Blessings”-adorned piece of art, and Clasen got him to translate it to a huge wall. “It took me 30 seconds to find him, call him, and beg him,” laughs Clasen.

Elsewhere, wallpaper takes center stage. A gorgeous ombre green bedroom, which only followed one strict style rule, features a two-tone wallpaper that is so intricate it looks handmade. “I wanted everything to be tonal green; I didn’t even care if any of the tones matched, but if [an item] fit into the green category, it was a consideration for sure,” says Clasen.

She used the same artist for the black inkblot wallpaper in the dining room. And if you ever needed proof that you can use a bold pattern in a tiny room, look no further than the game room with a huge Joshua Tree mural: “It’s 8 x 7 feet. I had to go big with something, and I didn’t want to do a bunch of art because that would crowd it. It changed the whole feeling of the room,” says the designer, who recommends tracking down local artists for a personal and cost-effective touch. “I love murals—they’re affordable and they’re changeable, but they evoke such personality.”

And while every room definitely has its own personality, Clasen says she wanted to keep an overarching similar aesthetic. Blending the three characteristics of the home—Spanish, beach, and bungalow—she created a space that’s varied, but not too all over the place.

“Every piece I brought in, I asked if it could be Spanish, if it was beachy, or if it had that bungalow feel. If it checked one of those boxes, I felt like it was safe,” says Clasen of her decorating strategy. “Everything happened organically! I didn’t overthink it really. It wasn’t planned out—it just sort of happened.”

advertisement
“When you’re doing your own house, it’s like a laboratory.”

For instance, she brought in a surf vibe, to tie in the home’s surroundings (“our whole house is like 12 steps from the bay”) and her family’s passion (“my husband and boys surf; that’s just the lifestyle we have”). Natural materials and shiplap walls pay homage to the coastal aesthetic, which also manifests itself more literally in the surfboards propped up in the hall.

In terms of Mediterranean influences, black-clad windows are a nod to the steel windows seen in haciendas, which play off the distinctively Spanish-style exterior.

All in all, this one-time flip is a far cry from the impersonal fixer-upper Clasen took on, with the unique style of each part treading the very thin line between tastefully miscellaneous and completely random. “I love this house!” she says. “I walk in and I feel like it’s got a lot of personality for how little it is. You know how eclectic can sometimes get weird? I think we saved it from getting too weird and pushed the envelope just enough.”

See more home tours we love: A 265-Square-Foot Apartment With Room for a Chef’s Kitchen Patterns Rule in this Colorful Austin Bungalow Proof that 300 Square Feet Is Actually Livable