This Eclectic Home Will Inspire Your Next Decor Decision (and Vacation)

See how one designer uses her travels to inspire her designs. 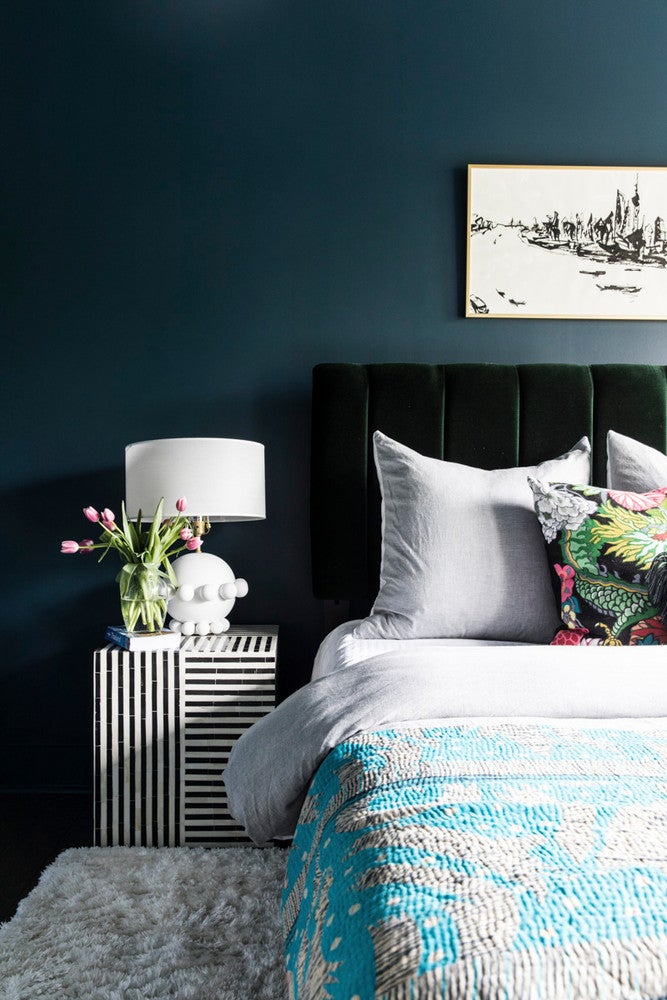 A true nomad knows that she can be happy anywhere, whether the deserts of Morocco or the sandy beaches of New Jersey—and nobody understands that better than House of Nomad co-founder Kelley Lentini. A boutique interior design firm based in Charlotte, North Carolina, House of Nomad takes its name from the somewhat ironic oxymoron that insists both home and a nomadic tendency can happily co-exist. A nomadic mindset runs through the heart of their designs, where Lentini and co-owner Berkeley Minkhorst create spaces that reflect clients’ personalities, as well as bring inspiration.So when it came to creating her own home, Lentini knew that she had to incorporate her own extensive travels into the design. After studying in London, Lentini moved to Shanghai with her husband for four years, and as a result, traveled her heart out.

“While living in Shanghai, we took every Chinese holiday we could (there happens to be a lot of holidays in China) to explore most of Asia together. We did several backpacking trips through Nepal, India, Cambodia, Vietnam, Thailand, and Myanmar—and a couple of more relaxing holidays to Bali and Borneo,” Lentini says. “This time in our lives shaped me: It was so inspirational and fulfilling that when we decided to move home to NC, I knew that we would want some of those reminders of our travels together; both big and small.”

But don’t think that means the entire home is a mishmash of objects splattered together—Lentini used her design background to create a space that was functional and casual at the same time. As the home was a new build, Lentini’s main aim was to combine both coziness and character—not an easy feat when your bones are so minimal. Light grey walls in the living room, for instance, are punctuated with boho chic planters, a chinoiserie-style rug,

, and personal accessories like a wood dresser and marble statues.

“We love to play with scale, color, and texture,” says Lentini. “We kept all the window treatments simple, and chose white linen draperies for the sliders that would accentuate the size of the windows and reinforce the bright and airy feel in the space.” This kept the attention on the decor moments and patterns in the room, which are used mainly to add pops of color on an otherwise neutral base.

But simple doesn’t mean lack of personality—a misconception Lentini is more than happy to dispel by way of more eclectic accessories, like a black hammock that hangs in the corner of the living space.

“The hammock is from a recent trip to Sayulita,” explains Lentini. “We went pretty crazy trying to find a black hammock, and no lie—they told us that there was no black string left in the town. We kept asking and looking, and finally, on the last day, one of the vendors met us with a black hammock they had just finished weaving. So she is extra special to me.”

An open floor plan lends to the expansive feel of the home, with the dining and living area happily playing off one another.

For Lentini, it was all about the console: “This is one of the perfect ways to separate two spaces, and also is super functional when we are having friends over and need extra countertop space for apps/drinks, etc. With the addition of the plants, it helps define the two spaces, and adds that pop of green that I love so much.” Framed textiles above the bar cart create a focal point on the black wall.

Lentini’s modern kitchen gets its own pop of color through

and plants, while the artwork is by an artist the couple found in Shanghai.

“He does these beautiful continuous line drawings with a traditional Chinese calligraphy paint,” says Lentini. “We chose open shelving painted the same color as the walls in the kitchen area to give us space for all of our cookbooks (something else we love to purchase after we have traveled to a particular place). The shelving also adds some personality by showcasing some of our favorite travel finds and plants.”

Outside, more patterns and prints mix together, with Lentini’s rooftop emulating what the designer calls a “modern Moroccan oasis.” Clean, modern furniture serves as the base that ties it to the indoors, and mixed prints provide a global feel.

“The best way to mix patterns is to start with your statement (here being the rug) and then break it up with contrasting textiles,” advises Lentini. “The bright colored rug felt organic and vibrant, so adding the striped black and white pillows helped keep it fresh. I was very inspired by photos of riads in Morocco, especially El Fenn. Berk and I are headed to Morocco for a sourcing trip this October, so that anticipation has been on our minds, and is influencing our design decisions.”

The most dramatic room in the whole space, however, has to be the bedroom. With its moody walls and velvet headboard, it differs quite substantially from the rest of the home, which was completely intentional—a statement room, if you will.

“The reality with a new build is that most (if not all) of your walls end up the same color. In our case, it was Sherwin Williams Agreeable Gray, so no big complaints there. However, I knew I wanted to paint at least one of the spaces to help create a more unique feel to our home,” says Lentini. “I have always loved dark walls, and the bedroom was the perfect place to create a relaxing retreat for us. Berk and I love using Farrow & Ball paint: It’s super rich, and the paint samples are reflective of how the paint will dry. Hague Blue was the perfect backdrop for the black and white accents. and the vintage, mid-century wood dresser.”

The deep hue allowed for some lighter pieces for contrast, like the linen curtains and cloud-like sheepskin rug. “The drapery and bedding were actually so hard to nail down. I was so afraid of this turning nautical on us, so it couldn’t be a bright white,” Lentini explains. Instead, she chose heather grey for her bedspread, and incorporated more sentimental pieces from her travels, like the colorful Chiang Mai dragon pillows.

“A lot of people are afraid of the commitment to such a dark tone, but out of all the times we’ve pulled in a more moody paint color for our clients, no one has repainted yet,” she says. More open shelving lets her accessories get their own space in lieu of a TV, so that Lentini can remind herself to never stop exploring.

“Berk and I believe your home should tell your story—not that of Pinterest and not your neighbors,” explains Lentini of her design ethos. “How you choose to tell it is completely up to you. Our story is told through the collection of things that we have found during our travels—and as we continue to travel and have new experiences, the home will evolve. It is always evolving. This is not just true for us, but for the clients we get the privilege of helping create a home that genuinely reflects them and their stories.”