This Eclectic Brooklyn Apartment Will Give You Major Wanderlust 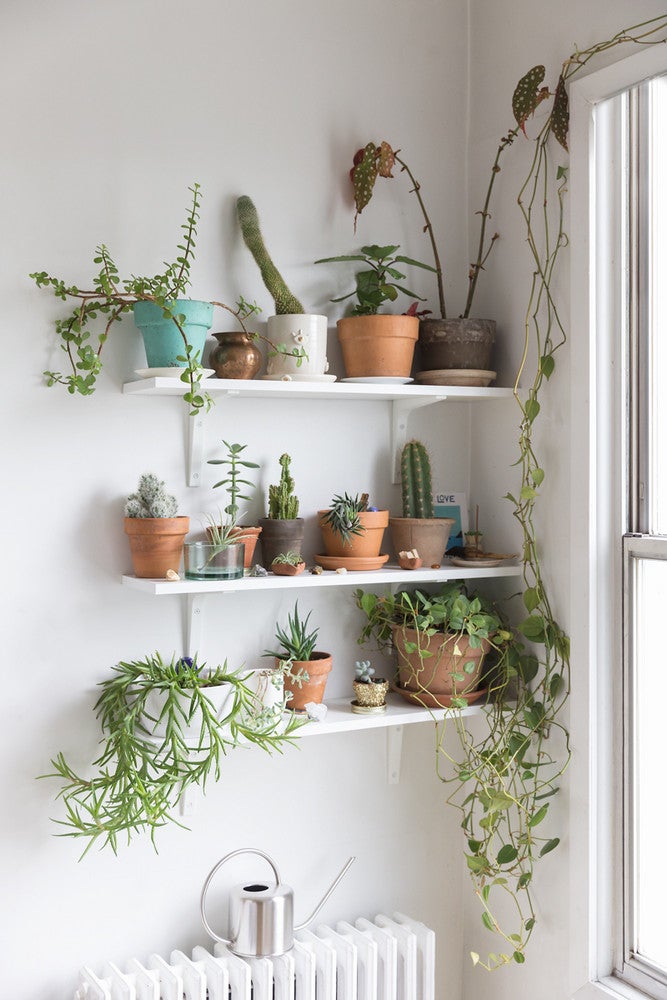 If you own a fashion brand, it’s fair to assume that your home is pretty fashionable in and of itself.

For Carol Miltimore, the founder of Brooklyn-based Seek Collective, this rings more than true. Not only is her home uber chic in an effortless, I-picked-this-up-abroad-in-a-flea-market kind of way, but it’s a true embodiment of her company’s values and her passion for travel.

Miltimore has spent a large chunk of her life globetrotting, and calls India her second home. This global mentality manifests itself in her railroad-style apartment through textiles, artwork, and decorative pieces—many of which Miltimore herself crafted.

“Almost everything has some story or some sentimental value, usually from travels,” says Miltimore. “I have one rug that comes from India, and I know the people that made it, another that’s from when I was in Tibet 12 years ago, and another from Morocco that I got while visiting a friend in the Peace Corps there. I do pottery as well, so there are some bowls and vases that I made.”

Miltimore, who moved into the apartment eight years ago in order to be closer to Prospect Park, calls the apartment her sanctuary.

She emphasizes natural items in her home, relies on crystals and natural light to bring a sense of calm, and incorporates the aforementioned personal touches to make the space feel homey.

“I travel quite a lot, and now that I’m running my business out of my home as well it’s been really important that it feels clean and organized. So while there’s artwork and textiles that are definitely eclectic, I also want to have a sense of peace,” says Miltimore. “All my friends say that it reminds them of either LA or a cottage by the beach; we joke that our catchphrase is “there’s never enough crystals!’”

Given the lack of closets in the apartment—which Miltimore says was the biggest challenge of designing the space—she has made due by adding shelving units and racks, even creating a sartorial

of sorts by hanging hats and necklaces. And while this eclectic mix of objects might to some seem the antithesis of “calming” and “peaceful” to some, Miltimore finds it just adds to the cozy vibe of the home.

“My home is very personal and everything in it is incredibly sentimental,” she says. “It’s a sanctuary that is filled with eccentric mementos from all my travels, friends, and my artwork.”

Travel is a central part of

as Miltimore founded it based on her pre-existing passion for global makers and art. Having caught the travel bug at a young age, she moved to Tibet for the summer after graduating from Parsons and has been on the go ever since, meeting with weavers and artisans around the world and shaping the aesthetic of what the company is today.

Which is actually pretty synonymous with Miltimore home decor: colorful yet simple, eclectic yet elegant. Everything is intentional—from the collection of crystals and trinkets on her apartment’s mantel to the geometric prints on some of her line’s pieces. And everything is rooted in her travels.

“It makes me add color,” says Miltimore of how travel influences her style. “And I’ve become obsessed with copper since living in India. My travels have mostly influenced me to find things that you can’t really get in the US; or I guess you could, but they’d be really expensive at ABC Carpet & Home.”

Another big style influence? Her mother, a self-taught renowned flower designer who inspired her love for greenery. Looking at Miltimore’s apartment, you can’t help but notice the prevalence of plants, which add to the natural feel and provide a calming presence.

According to Miltimore, even the home’s plants are intentional. “In the kitchen, there’s a whole succulent garden because those types of plants do well when I travel, as they’re hardy. If someone forgets to water them for a week they’re not going to die,” she says. “In the summer I have a garden on my fire escape where I grow chives and morning glories.”