A Brooklyn Home That Feels More Like a Mediterranean Tree House

Inside an internationally-inspired Brooklyn home exploding with texture and color. 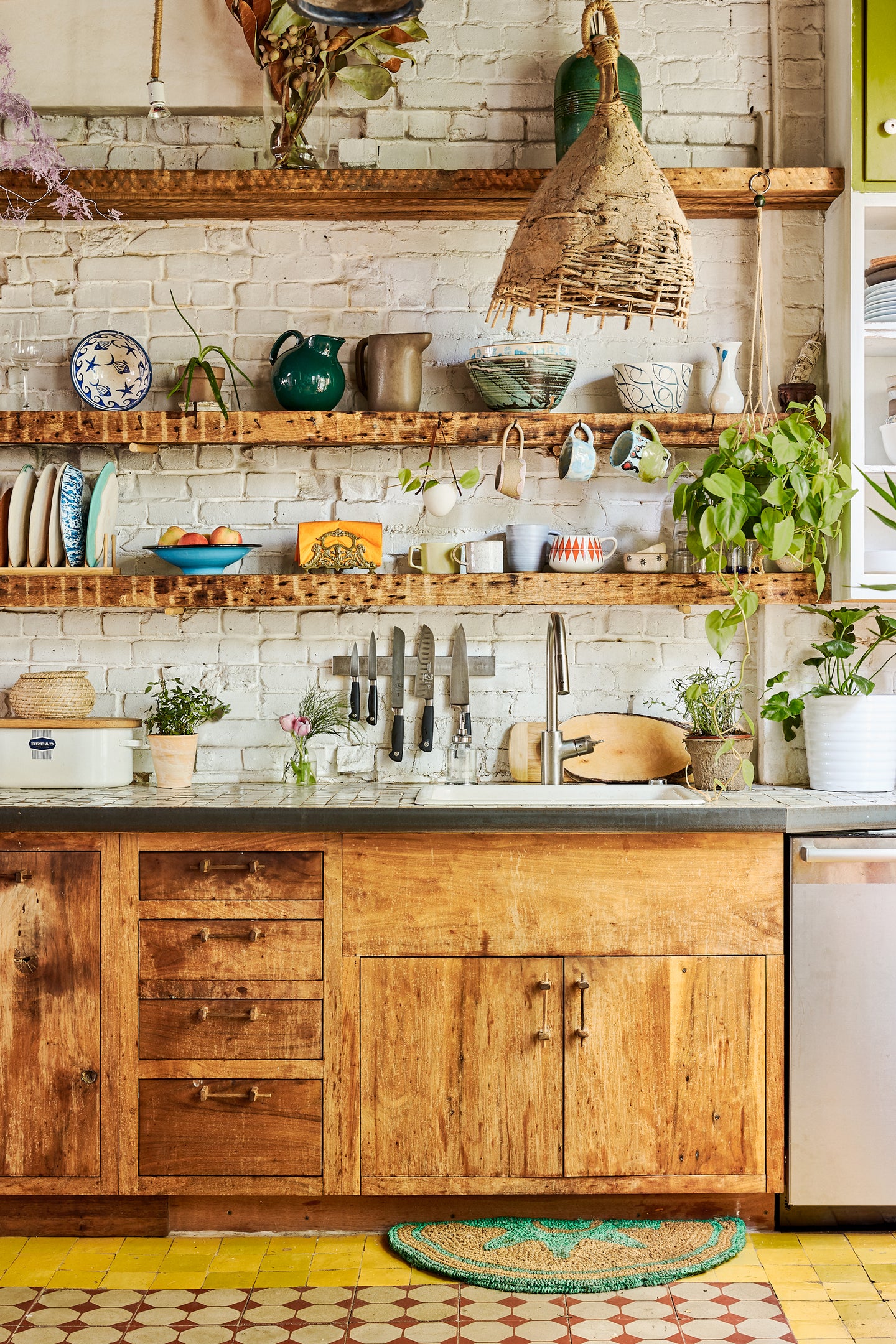 When most couples say they want to build a home together, it’s typically strictly a figure of speech. Sybil Domond and Dan Lessin, the husband-wife duo behind the buy-sell-trade lifestyle brand, People of 2Morrow, are an exception to that rule. For the past decade, the Brooklyn-based power couple has been cultivating their most creative project yet: Their Greenpoint townhome. Masked by colorful concrete walls, 100-year-old French cement tiles, and salvaged wood, their Brooklyn home exists somewhere between a Caribbean-cool treehouse and a Mediterranean surf shack.

“People of 2Morrow developed really organically and really beautifully, but it stems from the house. It all started at the house,” recalls Domond. “Once we started to work together on the house, we realized we really had a connection of creativity and aesthetic. We’ve been together now for 13 years but this was right at the beginning of when we first started to date. You learn a lot about someone when you’re doing a project of this scale. You’re like, ‘Okay, I can actually work with you!’”

Floor by floor, the pair has spent the better part of the past ten years renovating each of the home’s three separate units. While Domond and Lessin have called all of the apartments home at some point or another, the duo’s current home can be found on the third floor. Soaring ceilings and a separate mezzanine, which now doubles as a bedroom for their eight-year-old daughter, made this final stay the perfect retreat for their family of three.

“Before any of this happened, it was clear to me that her heart was really into vintage… the way she would go through bins and find really cool outfits and put them together,” Lessin says of his wife’s talent for blending old and new. “I was coming from living in squats in illegal buildings in the Lower East Side for six or seven years but I was always salvaging things. When I met her we sort of combined those two dynamics of bringing old things back to life.”

If Domond and Lessin’s walls could talk, they’d tell you everything you’d need to know. A tactile portrait of the blood, sweat, and hours that went into their renovation, each perfectly imperfect surface is a testament to their passion for travel and textured spaces.

“When we were figuring out how to design the place in the beginning—even before we bought it—we loved how the cement finishing in parts of Europe and the Mediterranean gave the walls this textured feel,” notes Lessin. “We were looking at it and my friend was like, ‘I can make that.’ So we ended up doing a mix of lime, plaster, and pigment that we hand-finished across all the walls in the whole building.”

“It’s weathered almost. It’s not so perfect—which is very much my aesthetic!” laughs Domond. “He’s more perfect, so that’s a nice balance between us. We have our differences but they work well together.”

With the help of a few construction-savvy friends, Lessin took a hands-on approach with the renovation. Blowing out walls, re-supporting the building with 18-foot beams, installing handmade mahogany windows, and adding French drains to the kitchens and bathrooms were just the beginning.

“He was doing all of this during Hurricane Sandy,” adds Domond. “It was pretty amazing to see how a group of people could come together to make sure that we could secure the building. It’s scary when you’re dealing with the foundation and the structure.”

Staying true to their longtime love for salvaged artifacts and upcycled materials, every surface tells a different story. In the kitchen alone, a wild mingling of materials invites new life. Can you name another home where raw walnut wood sourced from the Bronx and century-old French cement tiles  peacefully coexist?

“We both have very creative parents and we’ve both been exposed to different lifestyles and textures,” shares Domond. “I think that’s why we hit it off so quickly. When we decided to move forward to do this building I had all these crazy ideas and he was crazy enough to just be open to it.”

While her penchant for textiles and prints stems largely from her background in fashion (Domond used to run import production for companies like Target and Betsey Johnson), her fascination for color harkens back to her bold upbringing.

“My parents are from Haiti and everything was always so bright and colorful. In my grandmother’s house, every room had a different color. It could be a little crazy at times but, nevertheless, there was a beauty in making each space its own. I’ve tried to embrace that aesthetic,” she shares.

Along with the round walnut kitchen table (a quirky steal Lessin found on Craigslist), the imported Moroccan tiles are one of the couple’s favorite additions. Even if you took out all their furniture and decorative belongings, it’d be difficult to not feel instantly transported.

Between the exposed joists and 10 foot high ceilings, the master bedroom feels more like a tropical treehouse than a stuffy place to snooze at night. Filled with art and treasures sourced from flea markets near and far, to say that their textured slice of paradise is personal would be an understatement. As a dedicated thrifter and self-professed collector of objects and artifacts, hunting for hidden gems comes second nature to Domond.

“For me, I get more pleasure when I’m out in the field and there’s just an abundance of stuff and something is just calling out to you,” she says of her shopping strategy. “The first thing I see is texture, and then I see color. It could be a vintage dress or some detail that makes it just amazing—like really beautiful old wooden buttons that you wouldn’t see anywhere else.”

“New York is a place where you really have to think out what you have in your house. We all live in small spaces, so it has be practical,” she says. “If I’m buying pillows the first thing I ask is, ‘Does it have a zipper?’ No one wants to buy a pillow that you can’t wash—those are the kinds of mistakes I made when I was an amateur.”

Still, it’s the unexpected moments—the things you know only come around once in a lifetime—that give a home its flavor; it’s je ne sais quoi. For Domond, that piece is a photograph her close friend, Adriano Fagundes, took on a trip to the Brazilian Amazon.

“He was on his way to a village where there was an indigenous tribe and he saw this boy on a vibe about to jump into a large lake. Without even looking into his camera or having any focus on him, he took the shot quickly and didn’t know what to expect. The shot is of this boy just about to reach the water facing Adriano with the biggest smile on his face. That story and the way he tells it just brings me so much joy.”

While Domond and Lessin have come along way from barbecuing on their fire escape (yes, they did that) and dedicating 16 straight hours to one cement wall, those memories and that same creative ambition continue to inform their next projects.

A Whitewashed Seaside Home Surprises With Pops of Color

A Caribbean-Cool Brownstone That Will Make You Look Twice

This Rustic-Modern Home Is a Little Slice of California Paradise