Leonardo DiCaprio’s Designer Opens the Doors to Her Nashville Home

Dramatic arches and striped walls give it rock-and-roll soul. 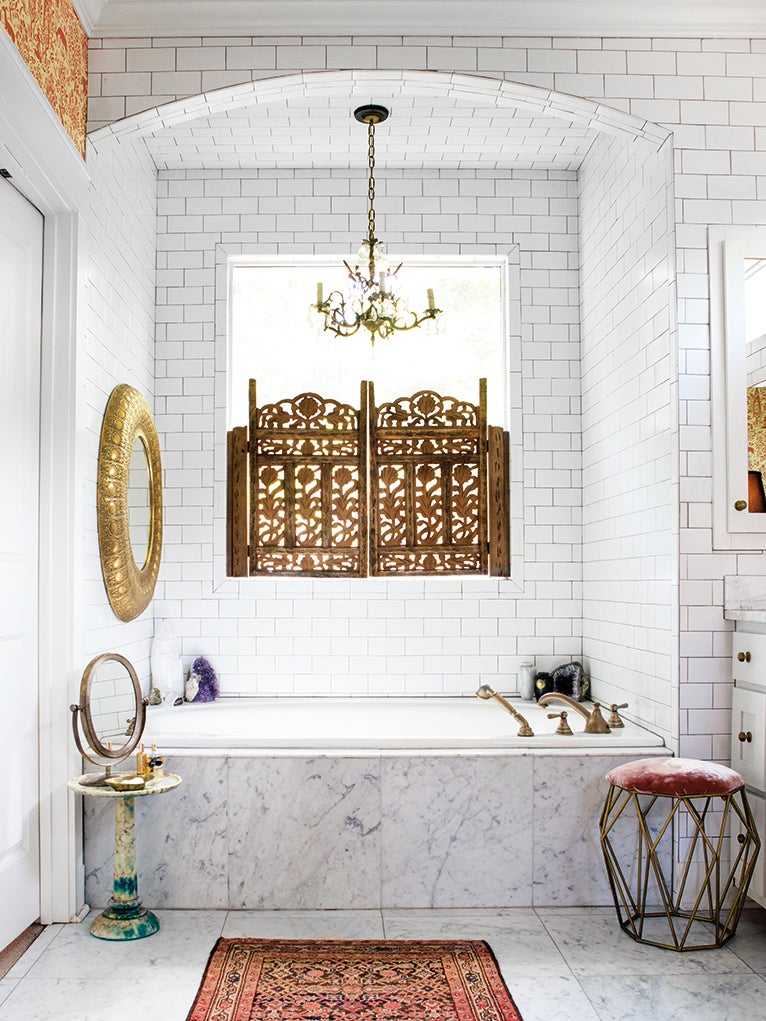 This story originally appeared in our Fall 2017 print issue.

There are artists and designers who are self-taught, and then there’s Louisa Pierce, who could host a master class in real-world learning. With no formal design training but plenty of style and grit, Pierce designed her Nashville home from the ground up, ultimately pivoting the hands-on project into her professional calling card. Along with business partner Emily Ward, the duo has quickly become the go-to designers for the alt-rock Hollywood set, counting Karen Elson, Brie Larson, and Leonardo DiCaprio as clients.

Describing her style as “wild and whimsical,” Pierce had an equally free-flowing trajectory. She grew up in Birmingham, Alabama, and moved with her sisters to New York City in her 20s, becoming “a bit of a party girl.” There she met her future husband, musician and Rolling Stone editor Austin Scaggs, and on a double date shortly after, she was introduced to her future best friend and business partner, Ward. Pretty much instantly inseparable, the two couples moved to Nashville in 2010.

As they started house hunting, Pierce and Scaggs were uninspired by the new constructions and found that older buildings needed too much work. Exasperated, Pierce decided she would design their house herself. She dropped into open house after open house, taking careful notes with then 10-month-old son Levon on her hip.

“Once I had a vision, there was nothing that could stop me,” says Pierce. She drew out a floor plan and met with an architect, who told her he had never had a client create a floor plan that actually functioned in execution—but Pierce’s did to a T. And so her first design baby was born. (She gave birth to daughter Poet in 2013.)

The family home, which Pierce describes as gothic-traditional, took just six months to complete. Boasting dramatic arches and a mix of bold prints and soft pastels, the space feels luxurious yet warm and lived-in, a combination that factors into every Pierce & Ward project. “You can walk in and not be scared to sit in a chair, even if it’s the most fabulous,” says Pierce.

Several of her most beloved pieces—a set of dusty rose moon sea ceramics, a goatskin-covered end table, brass Art Deco light fixtures—come from her late mother-in-law, Carmella Scaggs, who, as if creating a professional blueprint for Pierce, was also not formally trained. “She went on instinct and had the most unique style. She layered layer upon layer—more was more!” explains Pierce. “It was all about what she thought was beautiful, not what value something held.”

Riffing on tradition, the dining room features a Pierce & Ward signature in the form of hand-painted cream and black

. “Every house needs a stripe somewhere,” she says. “Black and white can be cheesy, so I do ivory.”

In the master bedroom, bedding hints at another experiment gone right: pillows made with fabric Carmella gifted Pierce years ago, which inspired a Pierce & Ward pillow collection. 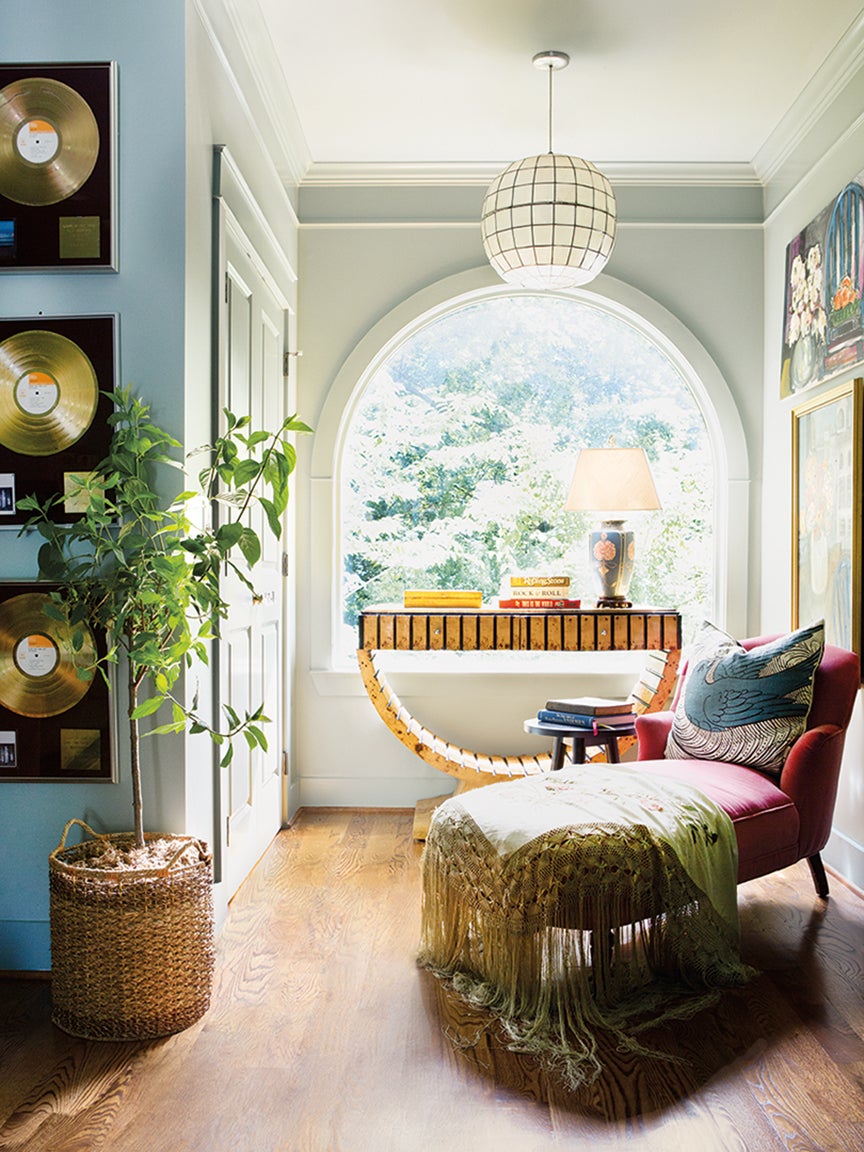 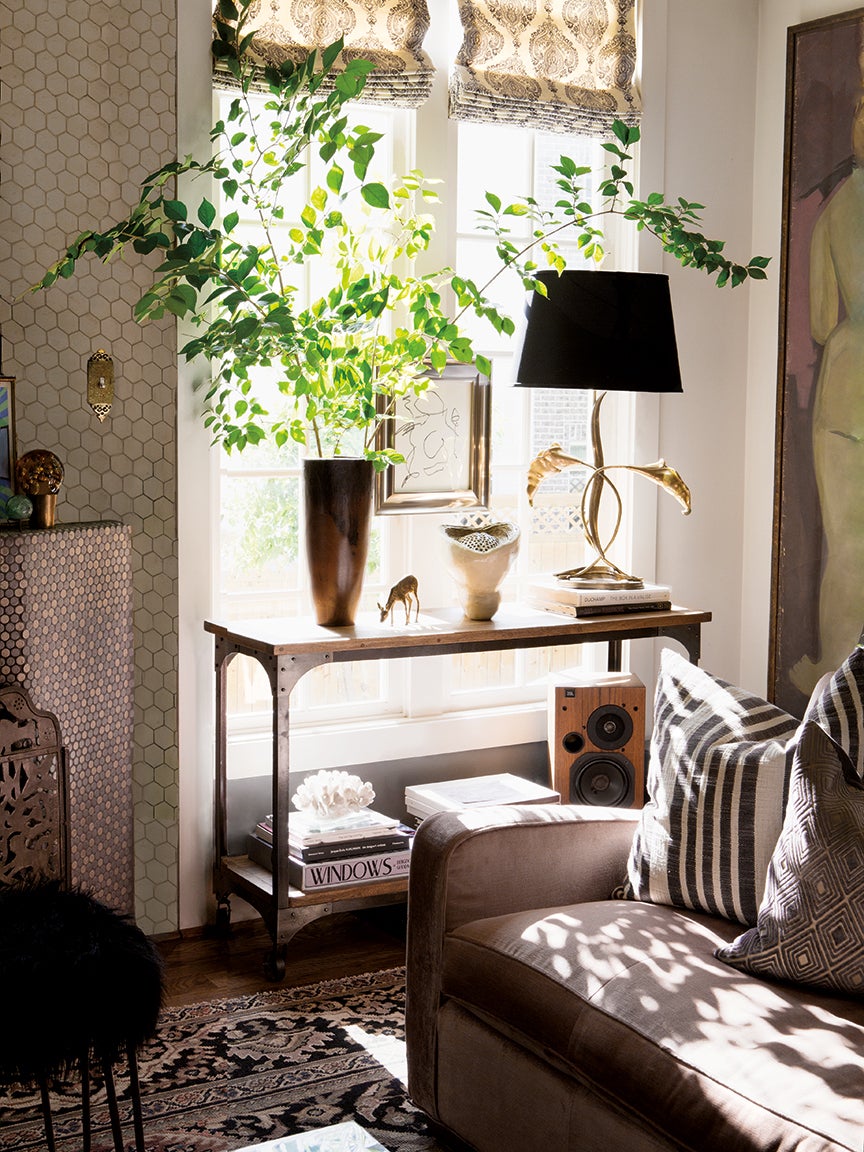 To create window shutters in the adjoining

Pierce repurposed an antique wood folding screen. And Levon’s room, packed with curios, is meant to channel the nook of “a traveler sailing the world and collecting treasures.”

Pierce embodies that life, flying twice a month to Los Angeles, where Ward relocated a few years ago. The duo has clients in both cities and beyond.

“It couldn’t be more of a dream situation working with my best friend,” says Ward (still near inseparable, the women call each other Buddy). “Louisa has much more refined and ballsy taste, and she’s helped develop mine. Now we never make a big decision without the other person.” 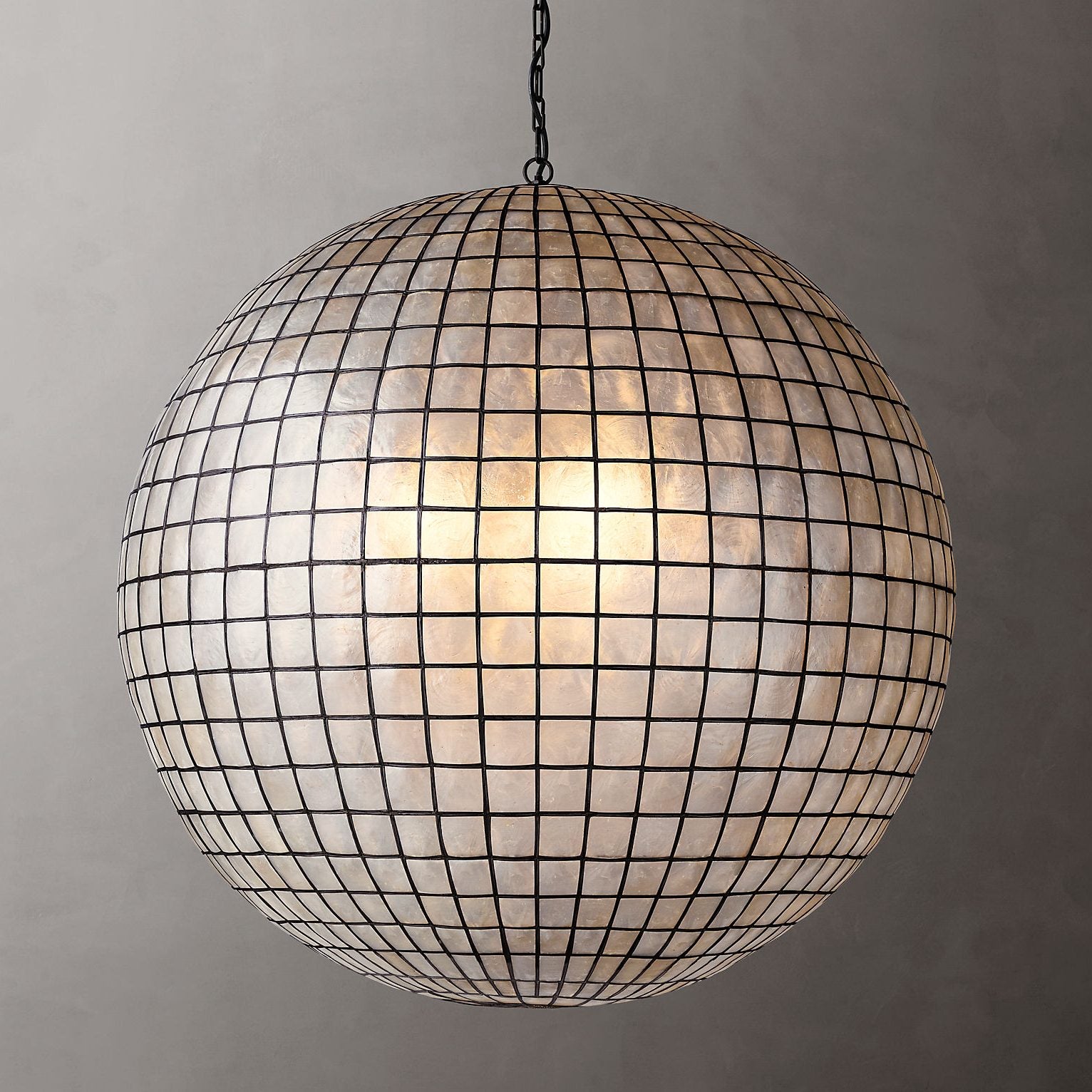 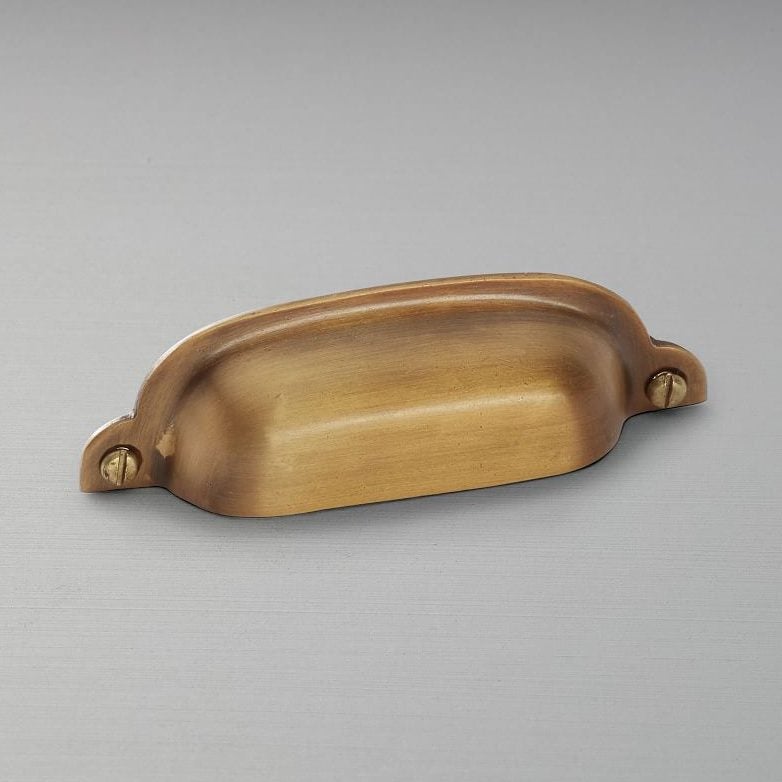 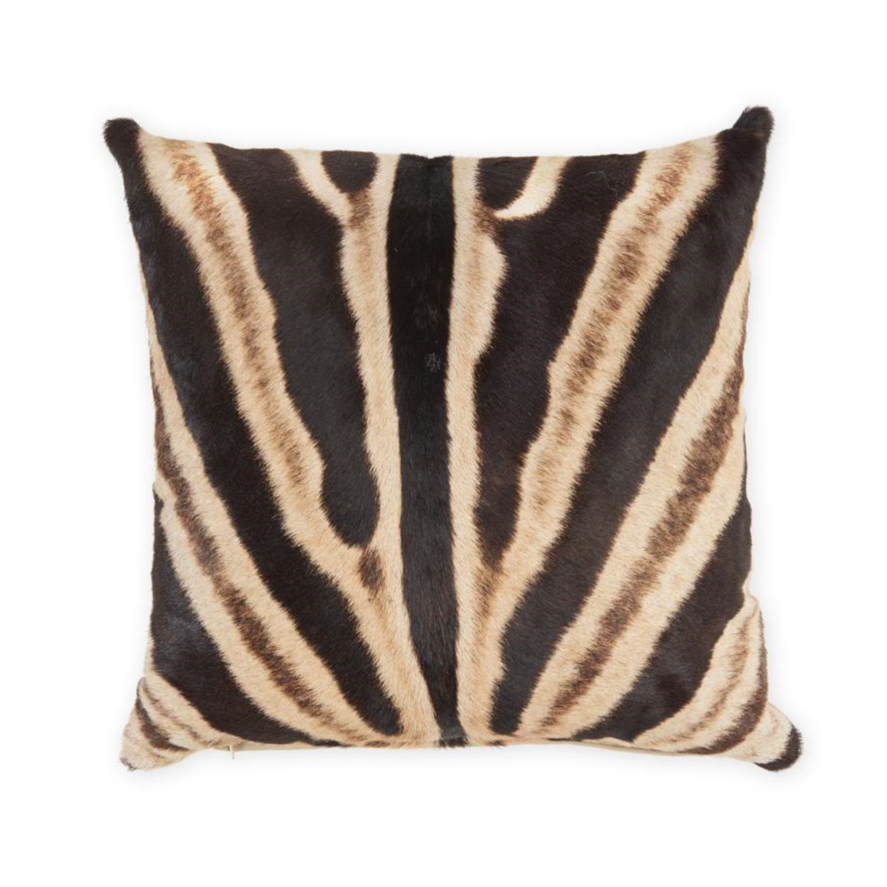 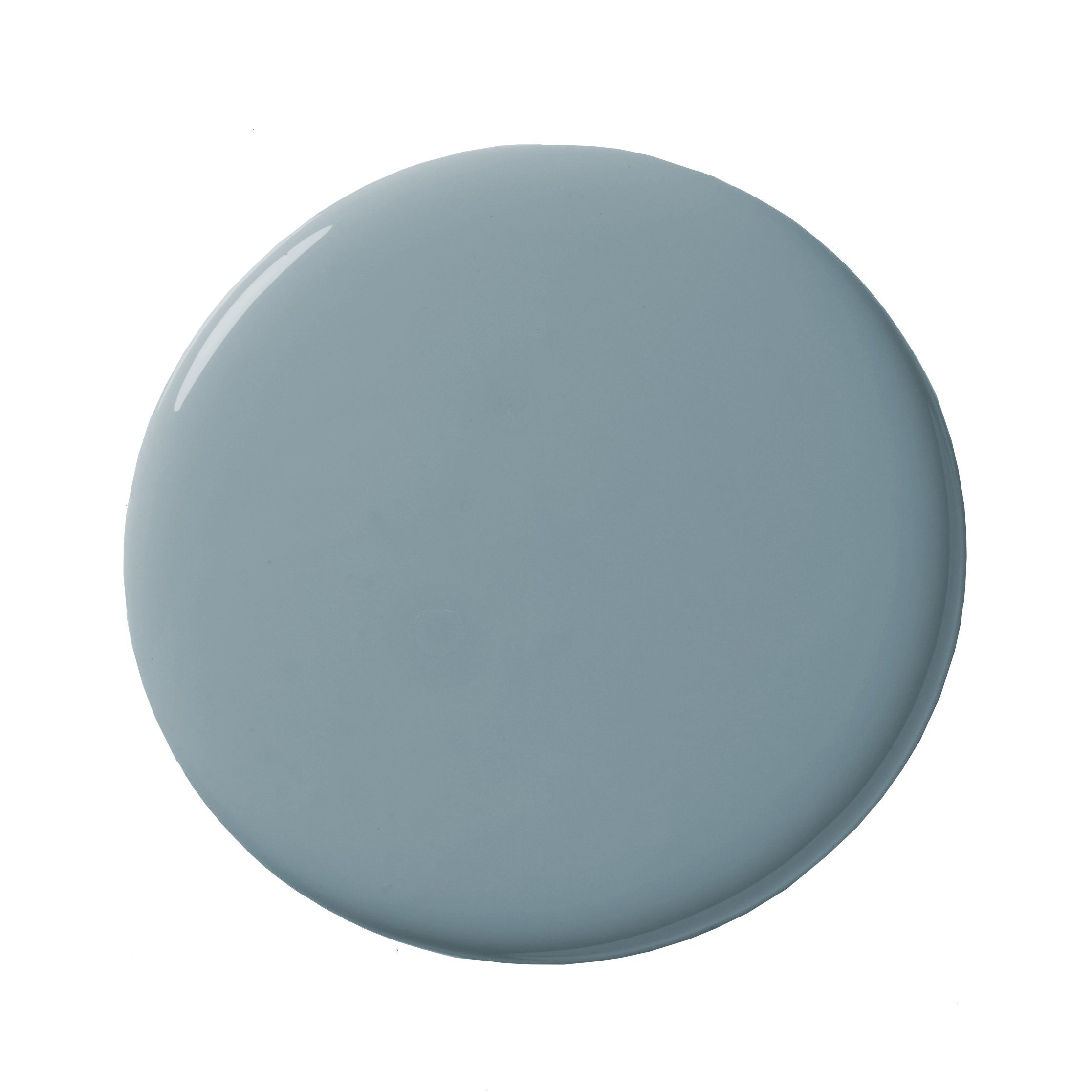