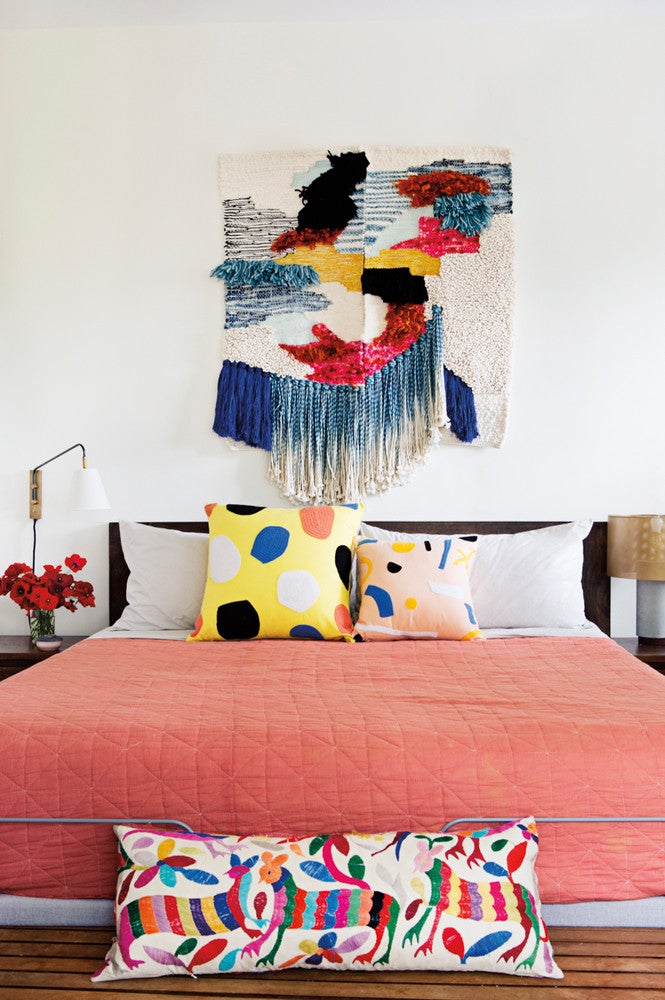 “The house belongs to the kids as much as to us—and we all like being around our favorite things,” says Genie Lockwood. She should know: The mother of two is also the founder of Arcade, Nashville’s most stylish shop for kid-tested, design-conscious, parents-approved children’s toys. Her own family’s HQ—which she shares with husband Alex, and sons Roman, 5, and Oscar, 4—is a maximalist’s dream.

Both avid collectors of vintage curios and art, the couple fell in love in Brooklyn, when Alex, a sculptor, rented a space in the back of Genie’s shop on Atlantic Avenue. They fell for Nashville two years later and, making their move Down South official in 2011, landed in the hilly Belmont neighborhood, known for excellent trick-or-treating and even better sledding.

The Lockwoods jumped on the ﬁrst 1905 American Foursquare they could ﬁnd. It turned out to be in rough shape—but just on the surface. “Under the paint and weird light ﬁxtures, the rest of the house was original,” explains Genie.

The ﬂoors offered the ﬁrst clue: three-quarter-inch strips of hardwood, milled without power tools and laid down in different decorative patterns in each room. “This place was made with tremendous skill and creativity more than 100 years ago,”

says Genie. “We have a beautiful backdrop to work with.”

After combing the Internet, the couple discovered Trustworth, a small company that reproduces the designs of architect C.F.A. Voysey from the late-19th and early-20th centuries. Next came illustrated botanicals for the bathroom and a near-geometric rose print for the dining room, which “looks contemporary yet works perfectly with the house,” says Genie.

“Hanging art in a traditional setting is like making a collage,” says Genie. “The surface has so much history and has aged so well—it brings enormous value to whatever you put on top.”

In addition to playing up the house’s good bones, the Lockwoods pay colorful homage to their vibrant community by displaying every medium imaginable—paintings, photographs, prints, crafts, found objects, and sculpture all make an appearance.

Most pieces are made by friends, many of whom Alex met through Elephant, a gallery and studio space in the Buchanan Arts District he opened in 2016 that focuses on local and regional artists. “There’s an exciting art scene growing here that we’re part of, and our walls celebrate that,” he says.

Of course, everyone in the Lockwood house has the opportunity to show off their most treasured items. “We don’t make a value judgment on the kids’ stuff—we celebrate it like anything else we display,” says Genie, who often switches up what’s on view inside the home’s original china cabinet just outside the kitchen.

Among their current favorites are paper ﬂowers, cellophane animals, old matchbox cars, gum wrapper chains, rocks, and shells. “Much of Alex’s sculpture is collection-based, so he’s always accumulating stuff,” she explains, adding bottle caps and losing lottery tickets to the list, as well as the bullets used in the large yellow face installed above the ﬁreplace.

Together, the disparate parts make an eclectic whole—it’s all about ﬁnding the right mix, according to Genie: “When our tastes cross over, like with the animal ﬁgurines or toy cars, that’s perfect.”

Genie’s tips on color, collecting, and controlling the chaos

Every room needs di≠erent colors and textures but also a rich variety of references. Try pairing things from di≠erent eras and places, and by artists with a wide range of backgrounds.

Time Is On Your Side

Keep adding and layering as time goes by rather than striving for a perfect, “ﬁnished” look. Spaces grow deeper with age, just like us.

Kid art is like any art; some you love, some you don’t. A frame is all it takes to elevate school-day scribbles to a museum-worthy work. Case in point: Alex’s childhood self-portrait that hangs in the Lockwoods’ bathroom.

Genie’s mantra: Get rid of what’s not being used or worn. New stuff is always coming in. If the old stuff doesn’t move out, you can’t control the chaos.

This story originally appeared in the spring 2018 issue with the headline “The Mighty Lockwoods.”