Tour a Denver Bungalow Full of Plants and Unexpected Moments

Get ready to be seriously inspired. 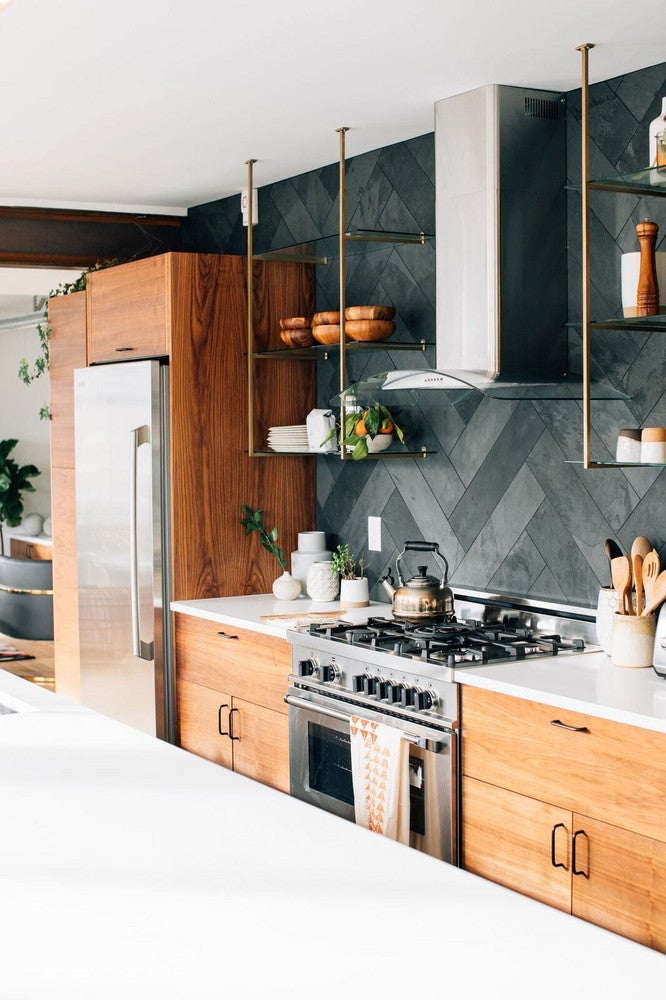 When it comes to designing a home, there are myriad sources and points one can turn to inspiration. For interior designer, Layne Kula’s latest project inspiration came in the form of the dwelling’s surround. One may say the designer had her work cut out for her, given that the backdrop of the home is Colorado’s mountainous landscape. Situated in the heart of Denver, it was the city’s thriving local culture and laidback environment that set the tone for the home’s decorative foundation.

A color palette was set to emulate the rich hues and deep energy of the terrain, while a minimalist approach to the overall scheme was established to downplay the intensity of the colors. The result? A home that exudes a sense of artful elegance coupled with a modern disposition that is simply unparalleled.

Home to power couple Michael Bennett and Ariana Chernin (the latter is the co-founder of The Barre Code), the space is also shared by their new baby girl Ives Ever and mini pitbull, Moo. When it came to settling on the aesthetic, it was all about creating a space with a natural and effortlessly cool vibe. The final product is a home that embodies an artful balance and a style that Kula refers to as “the new age, polished-bohemian aesthetic that is cropping up everywhere right now.”

To start, Kula aimed to juxtapose the modern elements of the home with inspired materials and rich textures. Sophisticated accents were brought in to offset the bohemian vibe the design was leaning towards, while the array of textured stones and dark, polished woods added a dynamic and bold detail.

“By building on the natural hues and tones, like dark textured stone, polished wood, and brass accents, I wanted to create a modern space that was filled with all of the possibility of a bungalow without ever feeling like it was overwhelmed with stuff.” A feat that can be relatively challenging, especially when it pertains to the bohemian vibe.

And because no bohemian-inspired decor scheme would be complete sans an abundance of greens, Kula was keen on bringing a healthy dose of them into the home. “Ariana is a devout lover of all things plants and greenery and when we met, she mentioned that the most important thing was ‘tons and tons of plants.’ It was exactly what the space needed and I often find that greenery and plant life are really what take a space to the next level,” notes Kula.

The secret to keeping them alive in the wintery climate of Denver? Making sure that the greenery receives as much natural light as possible. And given the array of floor-to-ceiling windows in the home, the couple was able to do just that.

If we had to pinpoint one standout moment in the home, the high-contrast kitchen would undoubtedly be it. “I really wanted to play on the textures and tones of the space,” Kula tells Domino. “I love natural materials and working with pieces that feel like an extension of the space—even if they don’t seem like they’ll go together at first glance.”

The key to achieving a cohesive two-tone finish that doesn’t compromise on style lies with the practice of staying within the same tonal family and working with materials that complement one another—think leather and brass or ceramics and neutrals—and take some major pointers from this spot, which proves that a dark backsplash and light-wood cabinets can definitely work well with one another.

In true boho fashion, an array of wall hangings were brought in to impart the home with a handful of fresh, textural layers and as a budget-friendly alternative to filling the home with art.

“In keeping with all of the natural elements in the space, we wanted to flesh out the blank wall just outside the master bedroom and I pulled a ton of eclectic hangings in mixed mediums,” notes Kula. “It’s the new way to incorporate art without breaking the bank—but you don’t want to overwhelm these specialty pieces either. It’s always about balance.”

The attic loft space was one that the couple chose to embrace as an intimate nook. The goal for this one? A spot in which they could cozy up with baby Ives. “I’m a big fan of the bohemian-inspired floor lounges and thing they’re such a fun addition to a home as a second living room or even a playroom,” notes Kula. “Think tons and tons of patterned pillows, cozy throws, floor pillows to exude the idea of a couch, and finish out the space with a low, Moroccan-inspired coffee table for books, plants, and knick-knacks.”

The bedroom was certainly no exception to the boho-modern theme of the home. Kula layered the space with a healthy dose of textured pieces, opting for those that embodied rich patterns and an abundant slew of saturated tones.

“Incorporating an abundance of greenery helped to breathe a whole new vibe into the space to really bring it to life,” Kula says. And the warm layer of colors played extremely well with the plants. Clean lines, eclectic accents, and layers of color atop the neutral backdrop helped achieve the boho-meets-modern aesthetic with effortless ease.

Kula’s goal of transforming the home into one that hinted at the possibility of being a bungalow certainly came to fruition in this detailed space—and one we definitely wouldn’t mind calling home.