A Designer Converted This Shipping Container Into a Graphic Home Office 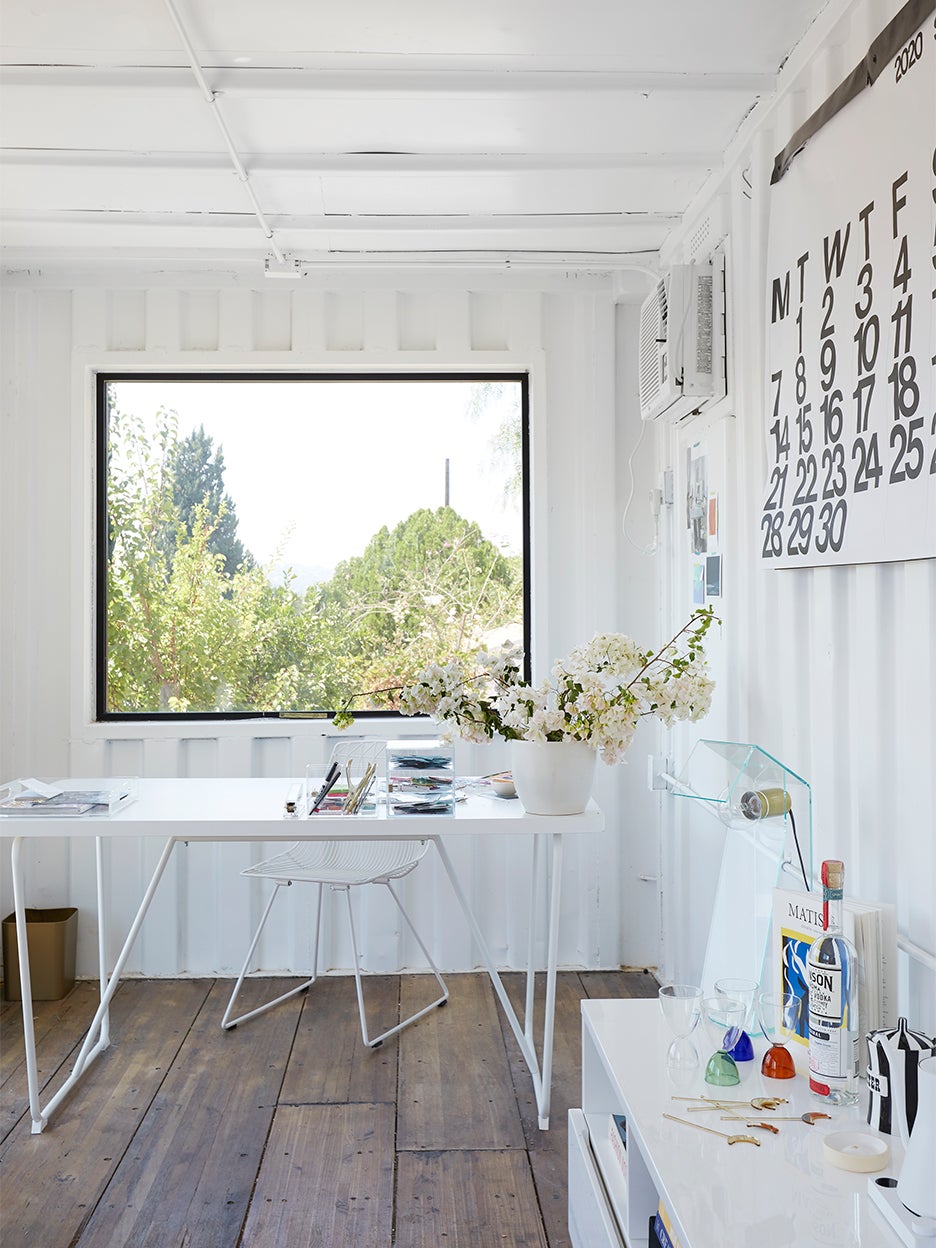 An infrequently used guest bedroom is a typical choice for an office. But for event production designer and creative director Layne Kula of Penny Layne Creative, setting up a desk in a space inside her home in Los Angeles’s Highland Park neighborhood wasn’t an option. Not because she lacked the square footage—she craved some separation. Luckily her solution was just outside her front door: The previous homeowners had left behind a shipping container. “This setup gave me a little bit of permission to have that office experience, but I don’t actually have to leave my house,” says Kula. The tiny box also saved her from renting a private studio space elsewhere in the city.

When Kula and her husband first bought the property, the interior of the container was in shambles, but the shell was solid. It had wood flooring, a large glass window, and sliding doors with screens. (While large, unrenovated shipping containers will run around $6,000, a standard 20-foot-long box typically costs $1,400. Though, you’ll have to tack on a few hundred dollars for a window and doors.) This past spring, just before COVID hit, Kula made some functional improvements to the container, as well as some major cosmetic updates to make it feel less like a chunk of metal and more like a zen workspace. “It felt much more creatively fulfilling to have a space that was light and airy,” she says. Here’s how she did it.

The California heat can be brutal on summer days, so Kula had an AC unit put in over her desk. (The previous owners had already prewired the container for electrical, making the install a breeze.) Adding a small awning to the roof on the entrance side of the container was another must-have.

The overhang, constructed out of simple 2-by-4s that were primed and then painted, helps keep the strong rays at bay. The window might not be operable, but Kula almost always leaves the sliding doors open during the day when she’s working to bring in the fresh air.

A coat of crisp white paint instantly made the interior feel like a proper workspace (Kula opted for Simply White by Benjamin Moore). Unlike a soft shade of cream, which Kula admits she’d be partial to using inside her house, a bright, cool tone like this makes the indoor-outdoor room look clean even when it’s not. “Everyone is into that very relaxed California-boho look right now, but I was going for an underground Berlin factory vibe,” says Kula.

Given the container barely measures 150 square feet, Kula kept the main furnishings white too, opting for a powder-coated steel chair from Bend Goods ($480) with a perforated frame that allows light to shine through it. The bare-bones desk was an IKEA find (around $75 with the tabletop). “I didn’t need to spend thousands of dollars on a desk that I know is going to get dirty,” says Kula, noting the matte top makes it easy to wipe off watercolor and ink.

Keep a Clear Space and Mind

To further expose the guts of the space, Kula put an acrylic coffee table in the center of the office and hung a neon light on the wall. A larger-than-life calendar and low storage console from CB2 help keep her mind clear and focused during the day. “I find I do better work the more I can declutter a space,” she says. The graphic armchairs from Anthropologie (Kula takes most of her meetings in this corner) help compensate for the transparency of the desk chair. They also make it feel more like a traditional living room (cubicle vibes are nowhere to be found).

Were Kula and her husband to ever sell their house, they might not take the container with them, but they’ve become married to the idea of a detached office. “Spare bedrooms are hard to come by in Los Angeles,” she says. All the more reason to think outside the (shipping) box.