A Home Office Refresh That Started With Chinoiserie-Inspired Wallpaper

Rental hack: The mural is temporary. 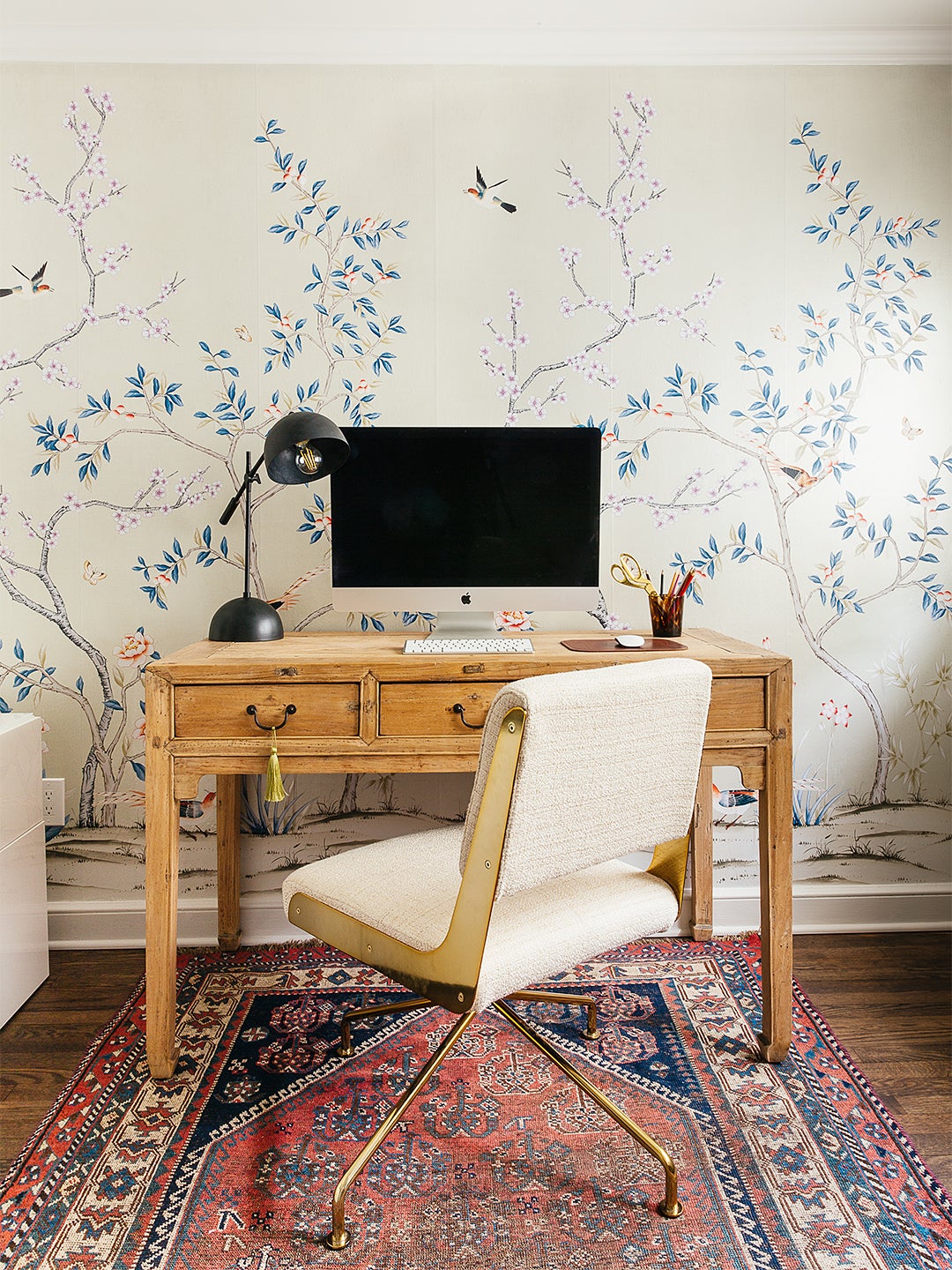 When Erin Kestenbaum decided on a whimsical chinoiserie-inspired mural for her new home office, it set off a chain reaction of creative projects. “The space needed something that was going to be the star,” says Kestenbaum of the temporary wallpaper. After landing on the print, the Connecticut-based designer reupholstered a Louis XV–style chair with $40 Schumacher fabric salvaged from eBay. Then there’s the IKEA Besta cabinet in the corner, which she reconfigured to have drawers.

The whole makeover came in under $3,800 and took 13 weeks to come together. While the changes she made were mostly cosmetic, the reality of making tough choices sunk in. Picking the perfect paint color is one feat—choosing the right desk chair is another challenge. Here, Kestenbaum walks us through the pieces she brought in to turn the plain white room into a WFH haven.

After Kestenbaum and her husband gave the room a surface-level facelift with a fresh coat of paint and new crown molding, she turned her attention to the accent wall. The designer found herself gravitating toward classic prints by luxury wallpaper makers like de Gournay, but was justifiably nervous about making the commitment. “Knowing that this probably isn’t our forever home, I didn’t think it was the appropriate place to splurge on that,” she shares.

Tempaper’s Garden Metallic print in champagne proved to be the ultimate workaround. “It was shockingly easy to install,” says Kestenbaum, though she notes it’s definitely a two-person job because the panels have to line up perfectly. All the designer and her husband had to do to prep the surface was cover it with a semigloss paint so the paper would stick. It took them an hour and a half to hang the entire piece.

Homes built in the 1970s come with their fair share of quirks, sad radiators among them. Luckily, hiding a hideous heating system is easier than you’d think. Kestenbaum and her husband ditched the metal cover that had previously concealed the grills and built a new and improved box out of scrap wood from previous projects. “We just kind of winged it,” she says.

In lieu of relegating her pens and planners to a lonely junk drawer, Kestenbaum scoured her own home for an all-encompassing storage solution. The couple’s IKEA Besta media cabinet, which had lived in the living room of their apartment three years prior, was the obvious fix. The piece was too deep for the tiny office, so Kestenbaum updated the configuration to be narrower and added drawers, as well as a sleek glass top for a clean finish.

The Craigslist Light That Rules

“Everything looks better with a coat of black spray paint!” is Kestenbaum’s motto going into most design projects. For proof, look no further than the matte black flush-mount light that she bought for $10 on Craigslist before sprucing it up. The budget-friendly upgrade cleared the way for her biggest splurge: an antique desk. She stalked the piece for weeks on an online auction and eventually got into a bidding war over it. “For me, it was all about the history of the desk,” she says. “I love investing in items that are vintage and well crafted—and that I know no one else is going to have.”

This story was originally published on March 22, 2019. It has been updated.

See more stories like this:  How to DIY a Woven Wall Hanging—No Loom Required Channel-Tufted Headboards Are the Next Big Bedroom Trend You Can DIY Your Weekend Project Is Here: 9 DIY Chandeliers You Can Make in an Afternoon