This Historic Pioneer House’s Best Feature Is a Curbside Find

It was plucked from the owner’s abandoned childhood home. 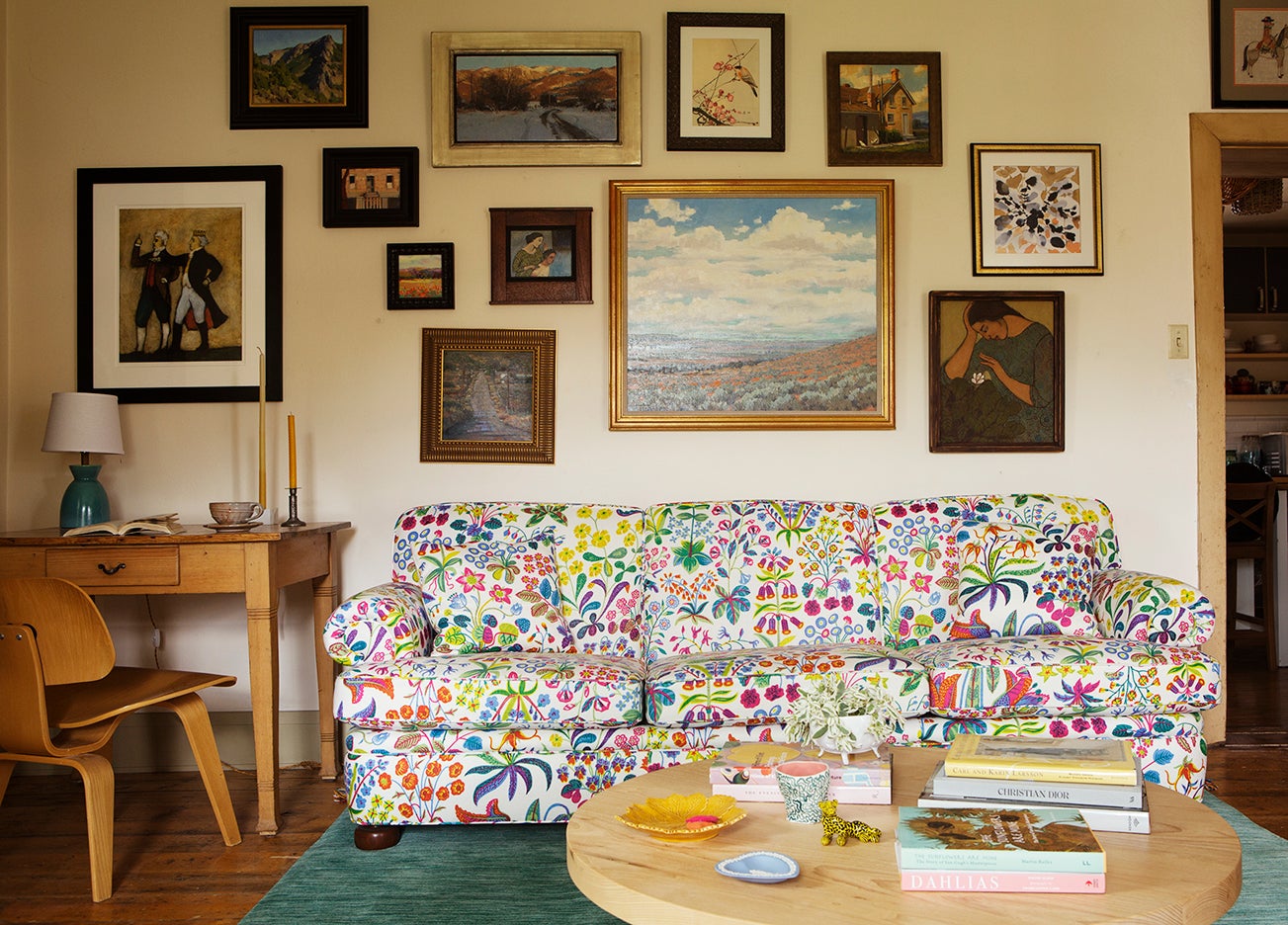 Photography and Design by Meta Coleman

Shari and Randall Thatcher never planned to redecorate—or even move, for that matter. Seven years ago the couple lived in a high-rise condo in downtown Seattle, a place they had called home for 30 years. But on Memorial Day in 2013, while visiting her mother in Spring City, Utah, Shari walked into a charming 1875 Danish pioneer stone house while on a tour hosted by the local Historic Preservation Society and noticed a tiny For Sale sign nailed to a tree.

She sent Randall a text message—“How would you like to live in Spring City?”—that would change the course of their lives. “I thought she was kidding,” he remembers, laughing. The town’s population clocked in at 1,000, and there were no cafés or theaters in sight. But within weeks, the couple had packed up their apartment, sold all their furniture on Craigslist, and moved in. “It was like a scene from Green Acres,” says Randall. “Two city slickers move to the country and hilarity ensues.”

Randall is the first to admit he wasn’t very handy back then: With building supers and handymen one phone call away in Seattle, he had never needed to be. “We moved here on two and a half acres with an old historic home to preserve, five outbuildings to fix, and lots of gardening to do, wondering if we had taken on too much,” he remembers. “There’s a woodshop on the property, and at first, I was afraid of it.” But thanks to many YouTube tutorials, he has since mastered the table saw, bandsaw, and drill press.

advertisement
“It was like a scene from _Green Acres_. Two city slickers move to the country and hilarity ensues.”

It helped, at first, that the house came fully furnished. The previous owners, a German couple, had decorated it with meticulous historical accuracy (he was a furniture-maker and had built most of the furniture to reflect how pioneers lived in 19th-century Utah). They had named it Das Haus in der Sonne (the House in the Sun). “As an homage to them, we kept it that way for several years,” says Shari. “We were scared to upset this beautiful historic feel.”

One day in 2016, interior designer Meta Coleman walked through the front door with mid-century furniture, graphic floral pillows, and vintage lamps. She was working as a stylist on a book called Old Home Love, about historical homes, and the Thatchers’ house had been selected to fill the pages. “She styled a few vignettes and we immediately asked: Can we just buy that chair that you brought?” says Randall. “We realized pretty quickly we didn’t want to go back to our old stuff.”

It was the beginning of a long friendship and decorating project that’s still ongoing. “Meta took one look around and said, ‘You know, you don’t have to live in a museum. It’s not reflective of who you are,’” says Shari. Out went dusty sofas and dark bed quilts, and in came bold Josef Frank sofas and modern Danish pieces. “It’s all in the balance of how you pair things together,” says Coleman.

Shari, whose favorite color is magenta (she once owned a hot pink 1979 convertible Volkswagen Beetle), embraced the colorful choices wholeheartedly. Randall took a bit longer to come around: “I was still stuck in the mode of, wait, our house is on the Utah Historic Register, and we’re going to bring what in here?” Today, seeing how his surroundings have been immeasurably improved, he has a new saying: “Always trust Meta.” Coleman retained some of the original charm: sage green trim on the windows, tables, and dressers made by the previous owner, and a towering traditional kachelöfen (a German white ceramic stove).

In a guest bedroom, Shari was determined to keep a bulky and dark headboard with beautiful ornate detailing, so Coleman decided to brighten everything else up around it: “We wanted it to be more soothing and calming,” she says. She upholstered a love seat in a sunny, mustardy yellow and painted vintage nightstands a dusty blue. For the walls, the designer picked a blush limewash that she and the homeowners applied themselves. “It was winter, so we built a fire in the little potbelly stove, played the Killers of the Flower Moon audiobook, and got to work,” remembers Shari.

The last project Coleman tackled was the main bathroom. The couple wanted to keep the wainscoting, so the designer repainted it a teal blue color and paired it with a Josef Frank wallpaper. She designed two wall-hung alderwood cabinets in a folk art style to pay homage to the building’s Danish roots.

The sink was a curbside find Shari and her mother picked up on the front lawn of the now abandoned house where she grew up. “My mom was horrified that we were stealing, so we went to the town hall and asked permission,” she says. The officer on site said they’d consider it “city beautification” if they took it. With a coat of enamel, a new wood base, and an adorable citrine sink skirt, it looks like it’s always belonged. Just like Shari and Randall, it blends into its new surroundings.