Plus, everything that’s inspiring her right now. 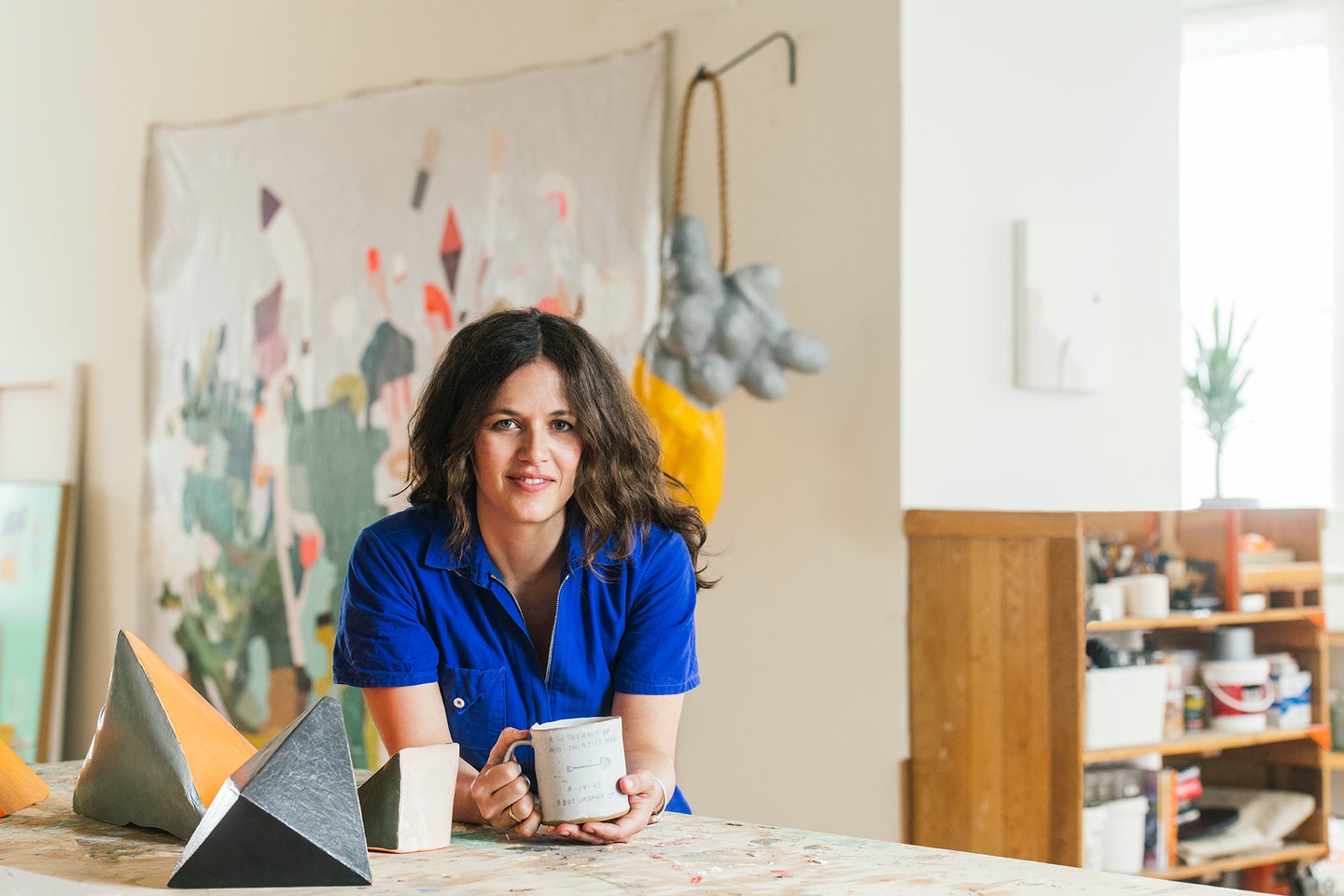 This story originally appeared in the Fall 2019 issue of Domino, titled “True to Form.” Subscribe to be the first to receive each issue.

“My studio is open and flexible, which works really well for my process,” says Philadelphia-based artist Jen Wink Hays, whose paintings and sculptures feature a compelling interplay of forms and colorways (think: sage, burnt sienna, and ochre with a shot of Schiaparelli pink). Her airy space, a series of conjoined classrooms within a sprawling old schoolhouse, is set up with various zones so Hays can juggle a few projects at once—of which there are many.

It was the promise of having more room to stretch out that first lured Hays and her husband, BDDW founder Tyler Hays (whose studio occupies another floor of the building), from New York to Philly’s Fishtown neighborhood, which they’ve called home for three years. And all that extra space has impacted Hays’s work in a literal way: It’s gotten bigger, with several of her recent oil paintings taking up 10 feet or more. The relationship between the artist’s layered, expansive canvases and her sculptures, amorphous constructions forged from papier-mâché, paper pulp, plaster, or clay, is a symbiotic one: “I want my 3-D forms to look like they’ve been pulled right out of my paintings.”

When it came to outfitting the studio, Hays favored minimal furniture and functionality above all else—a mix of offbeat antique finds and grand-scale BDDW custom designs. “Tyler made all my work surfaces, chairs, and these stunning workbenches with giant drawers to keep my tools and clutter tucked away, then he added industrial casters so I can move them around, depending on what I’m working on,” she explains. “He even made my stereo speakers.”

Her loose, intuitive approach has grown from following a circuitous artistic path. Hays fell in love with art while at Barnard College—“I didn’t hold a paintbrush until I was in college,” she says—and pursued the practice full-time after graduating, before pivoting into a successful graphic design career, and then again into school administration. (She is a founding partner of New York’s Blue School, a model of progressive education.) “One day I just felt ready to make art again,” explains Hays.

What surfaced was a clear, visual language rooted in abstraction. Color and shape, both natural and manufactured, dominate her work, and the juxtaposition between them is an endless source of fascination for her. “I like putting synthetic, trippy color moments and sharper man-made forms, like a neon orange traffic cone, in the middle of stuff that feels more organic, and seeing how they inhabit the same space,” Hays elaborates. “That sort of interruption thrills me.”

Books: I enjoyed David Salle’s How to See, and Tara Westover’s Educated was pretty stunning. I just started reading an airport book called Emotional Agility by Susan David, because that seems like a good thing to have.

Drink: Tart black cherry juice with seltzer and lemon on ice is my go-to, otherwise I’m white wine all the way.

Fashion: I’m happiest in my work clothes—old flannels, painter’s pants, boilersuits, overalls, T-shirts, jeans, clogs—but if I have to dress up, I like Black Crane, Caron Callahan, and Rachel Comey.

Place: I’ve got it bad for northeastern Oregon: The air seems fresher and the people happier, and it’s so vast and epic. I’m also fond of my home state of Maine and anywhere in Italy.

Store: I’m not a big shopper, but I’m so glad to have Vestige, Rennes, Vagabond, and Egan Rittenhouse in Philly.

Art: Milton Avery, Helen Frankenthaler, and Giorgio Morandi all knock me over with their paint handling and color mixing. Then there are the many working artists I love, like Sara Hughes, Amanda Valdez, Mamma Andersson, and Tom Sachs.

Nature: I like a good hammock. Plus tall trees and roaring streams.

More Studios We Love: Hidden Gems: Inside a Jewelry Designer’s Stunning Studio Studio Tour: The Space Where Good Moods Come From This Artist’s Studio Is Chicer Than Most Homes