You won't want to miss the stunning living room. 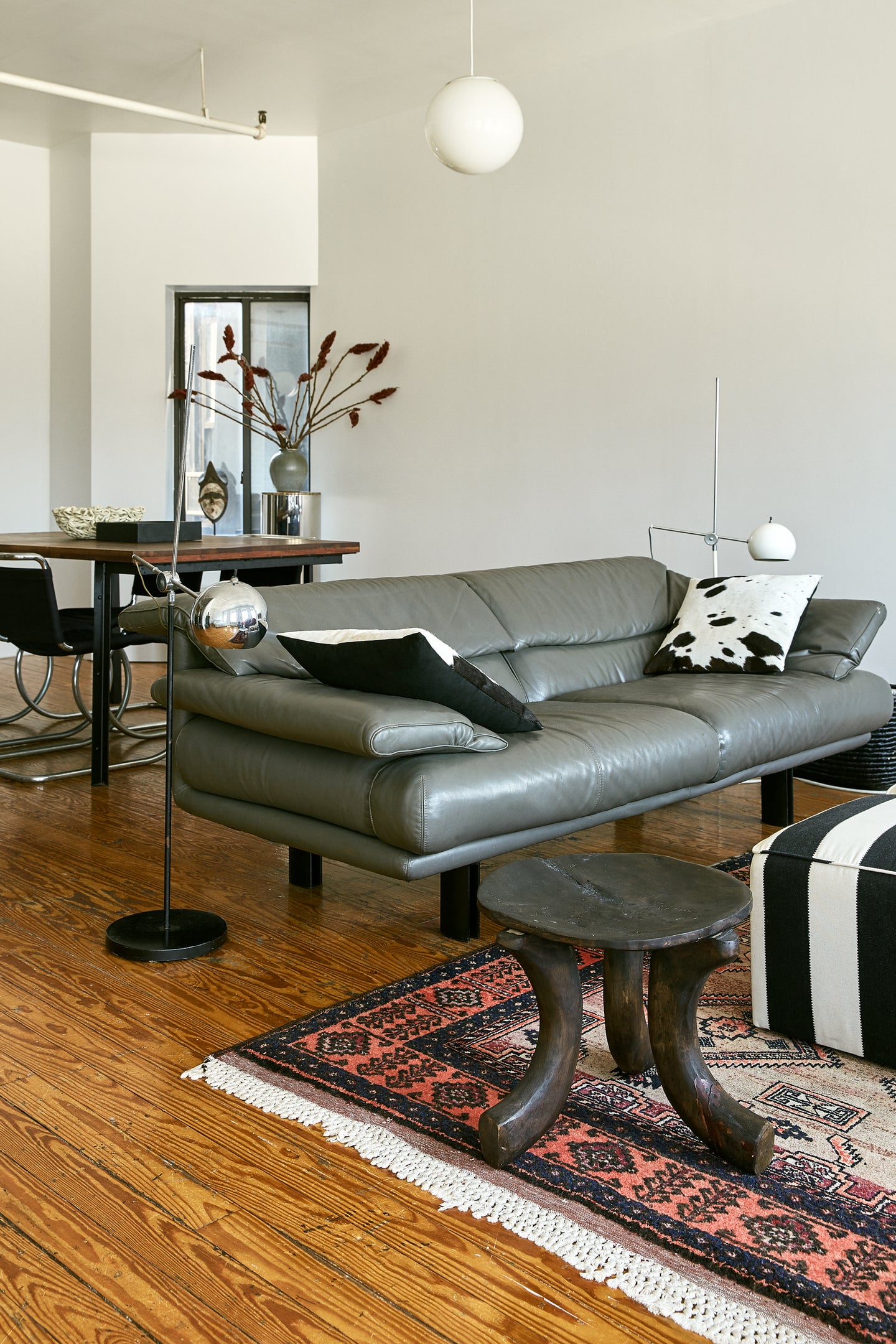 In just five short years, Marisa Competello has become a vanguard of the floral design world. Operating under the moniker Meta Flora, the NYC-based artist has built an avid social following entirely off the merits of her singular vision of what flowers can be. Often photographed in a sparse fashion, resting upon a concrete pedestal against a bare white wall, it’s immediately apparent that Competello’s work is all about the sculptural power and beauty of the floral form.

Competello’s precise and unmistakable point of view is made all the more remarkable given her self-taught background. “I had been working in fashion for a really long time and I wanted to make a change and have something of my own. I just decided flowers were going to be my new thing.” Provided with an initial opportunity to craft weekly arrangements for Sabrina De Sousa’s eclectic Canal St. eaterie, Dime’s, Competello leaped into the process of building her own design practice.

This aura of self-assured decisiveness emanates from everything Competello does, from her designs, to her words, to her home. Given our past collaborations (Competello has previously demonstrated for Domino how to arrange both wild, colorful, combinations, and single-flower statements) we were thrilled to see how she would apply her eye to her NYC home.

Much like her floral arrangements, Competello’s Chinatown studio apartment is a masterclass in visual and conceptual balance. At once airily disciplined—with nearly-bare white walls, a zen bed-scape rendered in overcast grey and white linen, and nary a piece of clutter in sight—it is also rich in personality (observe the deft yet unusual pairing of slouchy modernist leather sofa with oblong wicker lounge chairs, unexpectedly united by a softly rose-hued vintage Persian rug, and a pair of boldly striped upholstered ottomans).

The space strikes the eye with its sculptural shapes (a personal favorite is the selection of an off-kilter 1980’s dresser, its lacquered onyx silhouette calling to mind both John McCracken and a Jenga tower), and then allows it to unearth distinctive details (a hand-carved mask perched in the windowsill, a tribal stool providing yet more texture to the living room melange), all the while given room to breath by the overarching presence of white, grey, black, and wood tones.

Given the unflinchingly curatorial point of view maintained throughout every corner and plane of the home (in fact, it shares more in common aesthetically with one of Chinatown’s young contemporary art galleries than it does to the neighborhood’s typical living spaces), it would be easy to assume the design is the result of hours of minute composition and painstaking reassessment. And yet, when queried, Competello expresses an (almost infuriatingly) nonchalant intuition, saying, “I think I just like specific things. I don’t know how to describe why I like it, there are just certain things I’m drawn to.”

We spoke with Competello on the subject of her home design in order to dig into the creative and practical machinations that allow this designer/dancer/artist to manipulate form and space with such compelling results.

Your apartment is a pretty unusual, large studio space—what drew you and your boyfriend to this style versus a more typical apartment with distinct rooms?

Well, when we saw it we were about to move into this more typical one-bedroom, which wasn’t very exciting. And then, when we saw this space, we decided to go with it instead because it felt more spacious. It was open and there were so many windows and so much light. I like that there are no walls.

Is it also your workspace or do you have a separate space for that?

I have a separate studio. When I first started out I would work at home, but I’ve been in a studio for a couple years now.

The space almost has a look of a casual gallery/showroom in that it has a collected, distilled, non-cluttered appearance. Could this be a product of you being a part of the design scene of NYC?

I don’t think that was my intention—I’m more of a minimal person when it comes to objects and interiors. And it being a larger space, I wanted it to remain open and not just fill it with things and cover the walls, which is why I didn’t put anything on the walls. I just wanted it to feel large and open. New York is so intense, I wanted that serene, blank space. You get enough stimulation on the street, you know?

The space feels very individual and doesn’t fit into any one style category. Did this come from finding one piece at a time, or was there an overall inspiration from the start?

All the pieces were found individually and over a period of time. So the space has definitely evolved. Most of the stuff is found and vintage, so I think I just want to find things to add to the mix.

Where did you find most of the vintage pieces? And do you have any tips on what worked best in terms of finding those unique, original pieces?

They’ve all been found differently. Some I found on Craigslist, my dining chairs were my parents’ old dining room chairs I had re-done, I’ve got something on Chairish, I’ve got something on Live Auctioneers, something on eBay…I use all of the mediums for finding treasures! I feel like there’s not just one great place to find them, you just have to be patient and know what you’re looking for.

An area that really stands out to me is the juxtaposition between the oblong, wicker-like lounge chairs right next to those geometric marble nesting tables: what’s the story on those?

The chairs were off Craigslist, and the tables were off eBay. And I think in general I’m just into shape. If you look all around the apartment it’s just a bunch of different shapes. I’m into shapes as far as my work goes as well. I have a thing for shapes, apparently!

Speaking of shapes, I’m obsessed with your cacti collection. What drew you to bringing cacti into the space, and how did you find so many great, big ones?

They’re an addition to my shape obsession.  They’re also a logistical choice because I have a cat, and they’re the only thing he can’t destroy. I get them at the flower market. There are all these amazing plant shops, so whenever I’m up there I’ll pop in and get a cactus. I always tell everyone that they re-pot and deliver for you.

Continuing on our shape-narrative, we have to talk about the dresser. What’s the story there? It’s this sort of Brutalist, Jenga…

It’s the ’80s and weird! I was looking for something interesting and found it on Chairish. It was this full ’80s bedroom set, with a long dresser, the tall one which I got, and two side-tables. I should have just went for it and got it all! It’s such a special piece, it’s so weird.

I really appreciate your solution to the decor dilemma of the TV. How did you decide to mount it and cover it with that textile?

Michael Bargo is an amazing interior designer, and I saw that he had a piece of fabric over his TV and thought, “that is brilliant!” And then I found that tapestry at a thrift store recently, and it was so gorgeous, but I don’t hang anything on the walls, and I want to keep that way, so I thought “Oh, this is perfect.”

Something I’ve been into seeing recently is the use of pedestals or block-like objects to create different heights and draw attention to objects. How did you find those great chrome ones where we see the mask displayed?

Those I found in a thrift store here in the city and just thought they were really special. Sometimes you find something and just think, “I don’t know what I’m going to do with this, but I can’t leave it behind.” I like the fact that there aren’t many surfaces in the apartment, but then I have these pedestals that can be viewed as a surface, but aren’t taking up too much space.

The kitchen is a mostly clean, simple, utilitarian space, but you also have a lot of lovely bowls and containers in marble and wood as well as some decorative vases over the stove. What was your approach to putting all this together?

I got that kitchen prep table to break up the space and for an extra surface to work on. And as far as the bowls and containers, that was my moment to have a little excess since it’s pretty minimal everywhere else. Well, “excess” for me.

I notice that you don’t have a lot of florals around the apartment. Are you generally keeping those separate because you’re working them all the time?

I definitely always like to have flowers in the house, but it’s minimal. Maybe one or two, and always one element—never a mixed arrangement. I feel like I always have red flowers at home. I like to keep it pretty minimal because I am around them all the time. I don’t like to have them everywhere.

When you’re creating your work are you going out and intentionally seeking visual inspiration?

Flowers are always changing seasonally, so it’s often just about what I find and what I’m feeling. I always attribute the sculptural element and shapes to dance. I’ve been a dancer all my life (Competello leads a dance class called “Moves” with Chef Lauren Gerrie), and I really feel like that has trained my eye as far as creating lines and shapes with my body, and now I lend that to my work.

I love all the strange vessels you use in your work. Where are you looking for vases?

I use a real mix. I love finding vintage vases—’80s thrift store vases are my favorites. And then I have certain ceramicists that I always love to work with. Bzippy is a favorite. And then sometimes I’m able to just find them at these vase resources the flower market has. For the most part, they’re generic, but there some gems.

Lastly, an exciting new collaboration is your faux and dried series for West Elm. How did that come about, and how does it feel knowing your designs will now be able to be experienced by people on such a wide scale?

That was super exciting and so fun! West Elm reached out and I thought it was a great opportunity—it’d be chance to for everyone to have them. At first the idea of faux flowers seemed odd, but it turned out great. People really buy and use faux flowers. We’re spoiled in New York with flowers on every corner, but some people don’t have access to them. So I thought it was a great opportunity to make something beautiful that anyone could have in their home.