A ranch house in the foothills of LA offers a refreshing and unexpected take on Palm Springs modern. 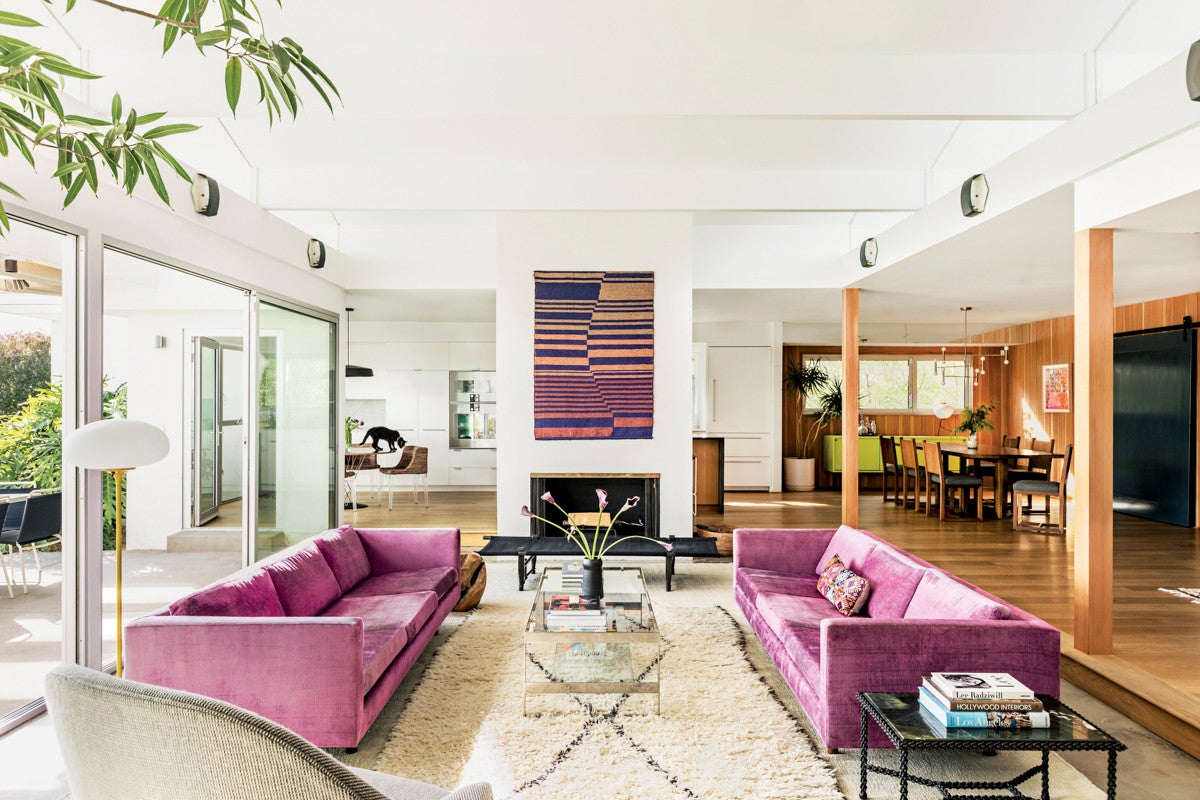 demonstrates architect Barbara Bestor’s aptitude for color in one simple, striking stroke. “Anyone who thinks to paint a door that color is a genius,” says

a longtime friend and client of Bestor’s and the owner of a modern but graceful ranch house in the foothills of Los Angeles. “Who doesn’t want to go home when they have an entrance like that to greet them?”

Nader, a television writer and creator of the sitcom 2 Broke Girls, shares the three-bedroom gem with her 12-year-old son, Bruno, and is by any definition a dream client: adventurous, design savvy, patient, and fun. She let Bestor—one of Los Angeles’s most celebrated architects, who has been credited with turning Silver Lake into a world-class design destination—work her considerable magic unimpeded.

“Even though the lot is just a few hundred feet above Los Feliz Boulevard, it has what real-estate agents like to call ‘jetliner views’ of the whole horizon line of the city below,” says Bestor. “So we maximized that by elevating the pool a bit and moving the master bedroom to the back corner.”

Nader’s main priority was creating an

where she spends most of her time by the pool, sharing meals with friends or taking work calls when she has a rare day off.

\The architect brought on Cy Carter—a Commune alumni and founder of design firm Carter Design with his wife, Genevieve—for his talent to “mine the recent past for ideas that don’t rely slavishly on trends,” says Bestor. The result is a softer take on Palm Springs modern, inspired by the color-blocking style of painter Ellsworth Kelly. It’s a very Angeleno home: sexy, laid-back, and built for both entertaining and family life.

“Barbara is a genius when it comes to floor plans,” says Carter, who walked through the project early on, after Bestor and her team uncovered the home’s original roof and reorganized the flow of the rooms to take advantage of the view and its potential for indoor-outdoor living.

“When I saw it, only the walls were finished, with some Douglas fir millwork and those great clerestory windows. But Barbara had a vision,” he explains. “She kept referring to the sunken living room as the ‘desert’ area, and then the rooms over by the kitchen, like the big TV room, as ‘watery.’ So we had real direction for the color palette.”

While some designers would have played up dustier desert shades, the Carters took a different approach. Following a trip to Joshua Tree in the spring, the couple noticed all of the wildflowers in bloom.

“We couldn’t believe that amazing pink,” says Carter. “So to us, fuchsia is a desert color.” (The idea carries through outdoors, where landscape designer Ana Saavedra planted a dry garden with South African and Australian plants that move with the wind and offer pops of purple and red.)

“I knew when Cy started talking about purply pink couches that he really got it,” Nader says of the living room’s statement seating. Pieces like a cobalt-and-coral Swedish tapestry over the fireplace, chartreuse buffet in the dining room, and ocean blue barn door leading to the TV room all play off one another.

At first glance, the elements seem as if they shouldn’t go together. But by keeping the background neutral, with warm wood and white throughout, Carter was able to treat the house like a gallery space, choosing shades that share a similar intensity to create a more adventurous mix. The result is as refreshing and unexpected as that citron-hued door.

3 Ways to Add a Soft Touch

While the angular lines of Nader’s home are pure mid-century modern, a few key details round out the harder edges.

To break up (and warm up) surfaces like concrete and stark-white drywall, Bestor installed wood paneling, milled to expose the natural grain. In a master bathroom or kitchen, especially, wood offsets cold stone and tile ﬂoors.

When layering in textiles, incorporate luxe textures and plush details, such as velvet cushions, a sisal rug that’s ﬂeecy underfoot, and nubby upholstery.

For outdoor spaces, balance spiky succulents with feathery, ﬂowering plants and tall grasses. “There are tons of desert natives that are lush and colorful,” explains Ana Saavedra, who designed and planted the garden.

This story originally appeared in the spring 2018 issue with the headline “Pop Culture.”