In This Self-Professed Maximalist’s Home, Every Item Has a Story 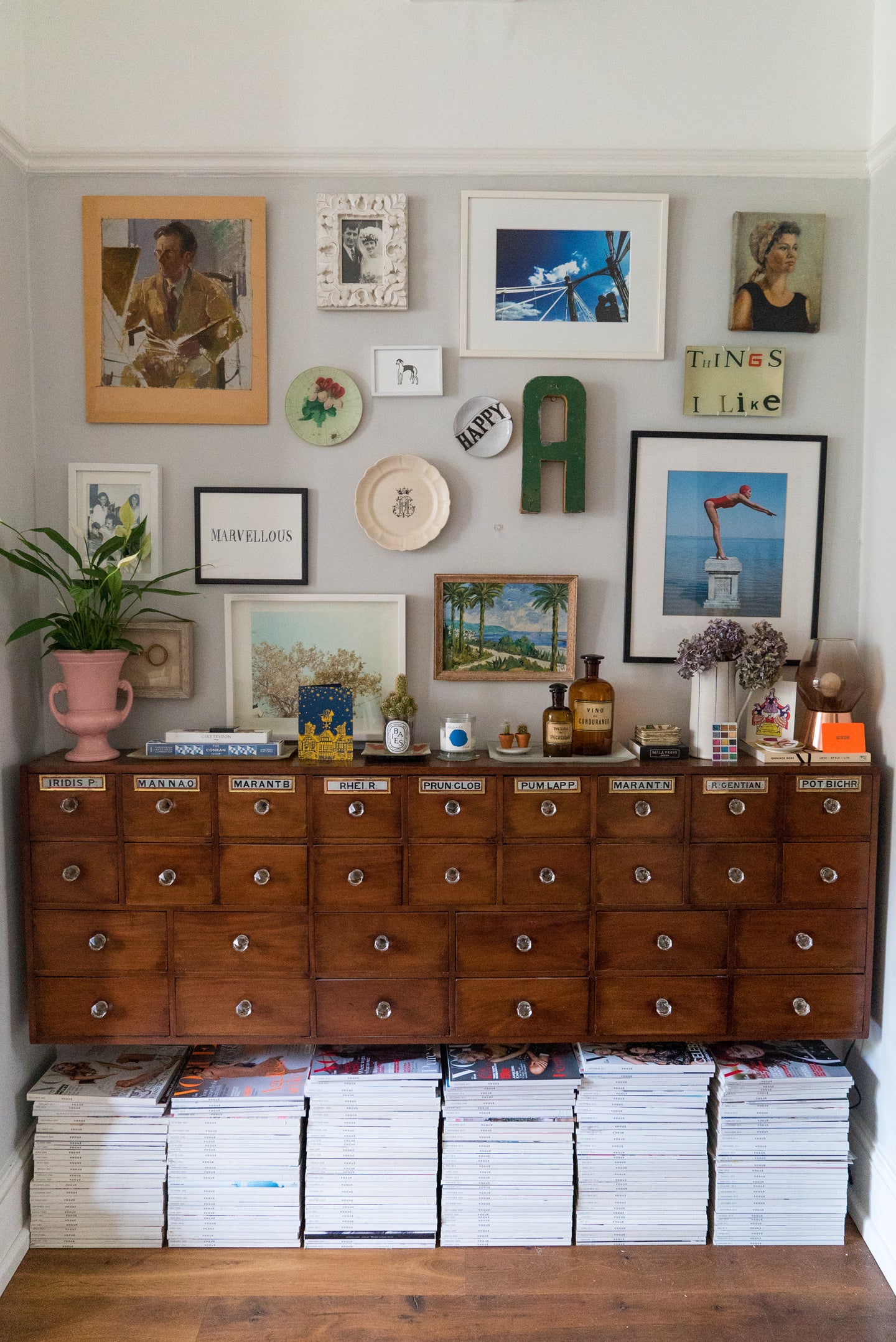 The first time Lisa Mehydene saw her now-home listed for sale, back in 2014, she immediately wrote it off; the early-1900s house in South West London was way over budget. The Edit58 founder and her husband, who were living in Singapore with their newborn twins and had flown back to the U.K. to look at houses closer to family, resigned themselves to seeing other, less expensive options. That is until their dream home popped back on the market at the last minute with a drastically reduced price. “We scheduled a viewing for that lunchtime,” remembers Mehydene. “We viewed the property once, for around 15 minutes, and then put in the offer. We just knew.”

The house ticked all their boxes: It was in a neighborhood filled with parks, had a small enclosed garden, and had been extended in the back. But the major selling point was a vine-covered facade: “Wisteria is one of my absolute favorites, so I had already fallen in love before walking in the front door,” she recalls.

Back in Singapore, the couple oversaw minor renovations from a distance. “The previous owners had four children, so they had split a bedroom to create two separate spaces,” Mehydene explains. They knocked down the partition to create one big space for her daughter. Downstairs, they blocked off a small door that connected the hallway to the living room and added a double-door entrance into the dining room instead. “It allowed us to have more flexibility with the furniture layout,” she adds.

Otherwise, preservation was the name of the game. They restored and retiled the fireplaces; stripped back to the original floorboards in every room; and whitewashed the hardwood planks in the upstairs bedrooms. For the walls, they kept everything in soothing French Grey by Little Greene Paint Company. “The neutral backdrop allowed us to add color and texture with personal items—things that remind us of loved ones, travel, experiences, and fun times,” she says.

As the owner of a homewares store, objects are naturally important to Mehydene; ceramics, Moroccan pottery, and scented candles are displayed in every nook and cranny. “I’m a sucker for a vintage market, junk shop, antiques fair, or souk,” she says. “I love the thrill of the hunt, the bartering, the knowledge that the piece has had a life before it comes to us.”

Her appreciation for secondhand pieces truly comes alive in the dining room, where an apothecary cabinet from a chemist in East London serves as a display for cacti, coffee-table books, and greeting cards. “It fit with two inches to spare,” she notes. “It was meant to be!” Open a drawer and you’ll discover anything from napkins to candleholders to letters from friends.

The house being tall and skinny (it’s spread over four stories) means the kids have their own floor while the parents have private quarters above. “It works really well for us and allows me to just ignore their floor when the mess gets too much,” Mehydene says.

The twins’ bedrooms are indeed treasure-filled. “When we decorated the rooms, the kids were only 2, so they didn’t have any input, with the exception of knowing what they liked—giraffes and cars,” she remembers. A picture rail in each space now serves as a revolving door of art, books, and toys: “The children can themselves curate with what they’re currently into.”

Mehydene’s bedroom, meanwhile, is a sanctuary of sorts: “I love the view from our bed. We have two floor-to-ceiling sash windows with shutters, and the wisteria frames the windows. Looking out, you can sometimes forget you’re in London. It’s a really relaxing place to be.”

Tour more homes we love: Brass Cabinets and a Few Lucky Surprises Made This Century-Old Home Truly Shine Sarah Sherman Samuel’s Epic Fixer-Upper Is the Stuff of Reno Dreams Courtney Adamo’s Newly Renovated Cottage Is the Perfect Fit for Her Family of Seven