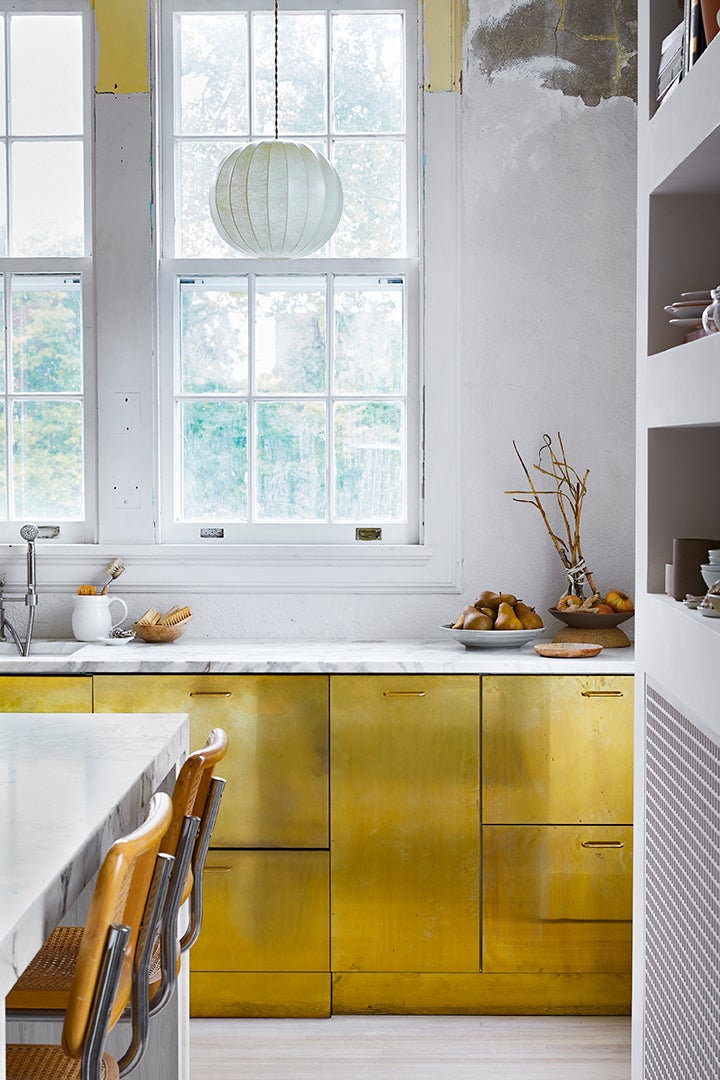 This story originally appeared in the Winter 2019 issue of Domino, titled “A Perfect Patina.” Subscribe to be the first to receive each issue.

Nestled atop a hill along Minneapolis’s Pleasant Avenue stands a three-story Neoclassical structure that has played many roles over its 100-year existence—including the winter home of a prominent grain family, the offices of an insurance agency, an outpatient treatment facility, and, more recently, a vacant, dilapidated edifice. But in May 2017, the dwelling found its next calling, which was in many respects a return to the beginning. “Even when the floors were covered in tar paper and there were extra walls, you could still see this magical light,” say current owners Liz Gardner and Josef Harris.

The couple and founders of Bodega Ltd.—a multidisciplinary creative studio with clients ranging from Nike to a local Hmong cuisine pop-up called Union Kitchen—christened the 4,000-square-foot space Maison Bodega when they bought it and started planning how to maximize every inch. They envisioned public events and retail experiences on the ground floor (made possible by favorable zoning laws and a 14-spot parking lot), a salon-style entertaining area on the second (which could double as their workspace), and a serene apartment to call home on the top. Just as the corner-store namesake of their company stocks a variety of goods, the duo designs across interiors, websites, and workshop activations, opting to collaborate with brands that seek a holistic, “world building” approach, says Harris. “Everything is an opportunity to create your story and apply your values to it. Everything is connected.”

The property is no exception. Years earlier, Gardner happened upon the building, its European frame set in sharp relief to the handsome, dark wood features of the neighborhood’s predominantly Arts and Crafts homes. She immediately fell for the plaster stucco arches and original wavy glass windows. It was a “dream space.” But the couple wasn’t prepared for the investment and it slipped away. When a developer’s plan to convert the lot into apartments failed abruptly, Gardner and Harris quickly seized upon their second chance.

The meant-to-be clues only continued: Looking through records dating back to the 1800s, they discovered two names at the top of the property’s permit card: Gardner and Harris. Add to that its lineage as a cultural and entertaining hub for everything from themed parties to readings to weddings led by dynamic local entrepreneurs of the era, and they sensed a fated magnetism at play—something they reminded themselves of in the “dark part” of the renovation. “You have to tell yourself it’s destiny, otherwise you can get pretty discouraged,” says Harris with a laugh.

During the first part of the two-year project, the antiquated electrical setup, plumbing, and HVAC had to be completely reworked with the help of architect Toby Rapson and electrician and lighting designer Matthew Baird. (It became clear early on that the general contractor they had hired prioritized efficiency over thoughtfulness, so the couple designated Gardner’s father, Jim, a natural problem solver and talented woodworker and craftsman, to act as point person.) The mental gymnastics of modernizing the century-old structure was matched only by the sheer physical labor of demolition (much of which they did themselves)—tearing down walls, jackhammering through cement floors, and excavating horsehair and plaster ceilings. Then came the quieter task of carefully stripping away layer upon layer (wood-print linoleum, tar paper, Berber carpets) in order to reveal the underlying essence of the space.

While friends and clients were puzzled by the seeming lack of progress (Bodega Ltd. meetings took place in the unfinished headquarters, as physical representation of the pair’s hands-on approach), Gardner and Harris knew that this “invisible work” was essential in “pulling things apart, looking at them, and then really thinking about how materials were used and how the space was built—to respect the past and take it into the future,” explains Harris.

When it came time to install a full kitchen (it had been lost somewhere along the way), a former dining room was selected for having “the most beautiful light at all times of day,” says Gardner. To build their ultimate hosting space from scratch, the duo brought in elements both practical (double dishwashing drawers for “pace cleaning” during the sprawling dinner events they’ve become known for) and sublime (brass counter fronts that make the kitchen seemingly radiate from within). Down the hallway and through an arched doorway, the larder serves as a prep area, outfitted with a 1920s garden sink raised on a brass base that was designed by a friend, its marble basin and shallow tray ideal for arranging flowers and icing drinks out of view from guests.

Keeping an ongoing conversation with the building—Gardner describes it as “a lady who needed to be listened to”—helped them stay attuned to more hidden opportunities buried in the rough. Case in point: Removing Sheetrock from a ballroom wall boarded up in the 1960s revealed the original banister of a spectacular “Rapunzel perch” overlooking the marble staircase. The additional natural light now streams through the opening and illuminates the ballroom fireplace. After removing a discordant back stair from the rear exterior, Gardner spied an antique “rug-shaker balcony” in an architectural salvage yard with the exact width needed to frame the custom kitchen doors the couple had sketched out (yet another kismet wink to let them know they were on the right path).

Beyond structural restoration, Gardner and Harris consider themselves stewards of trade skills, seeking to revive and celebrate craftsmanship—from the custom yellow onyx, pink quartz, and oxblood terrazzo mixed by local artisans who had once specialized in Italian churches to the kintsugi-style repair of the bathroom tile (in which gold-tinted mortar is applied to the cracks, and, in a beautiful twist, makes it more valuable than if it were new) to the herringbone wood floors lovingly remilled by Jim on the apartment level—treating each surface as an investment in the future and allowing the building’s bones to literally shine.

Just as the kitchen’s brass fronts are meant to develop a patina with time, Gardner and Harris intend for Maison Bodega’s “living finishes” to wear in, develop further unique character, and layer new chapters to the storied structure—including a weekend workshop series exploring vegetable fermentation as an art practice (a collaboration between Berlin-based artist Anaïs Hazo and Minneapolis-based artist Miriam Karraker) and an upcoming furniture collection developed with a Bodega client looking to revive the rosewood antiques her family saved during the Chinese Revolution.

In the end, all the hard work paid off. “If we had every dollar in the world to do everything we wanted, we wouldn’t have the same connection to the space,” affirms Harris. “Now it’s richer in a different way that can’t be replicated.”

See more from our Winter issue: Sarah Sherman Samuel’s Epic Fixer-Upper Is the Stuff of Reno Dreams Courtney Adamo’s Newly Renovated Cottage Is the Perfect Fit for Her Family of Seven What Does It Take to Make an 1850s Victorian Home Feel Thoroughly Modern?