We Converted an Old School Bus into a Tiny Home

Inside a couple’s cozy house on wheels. 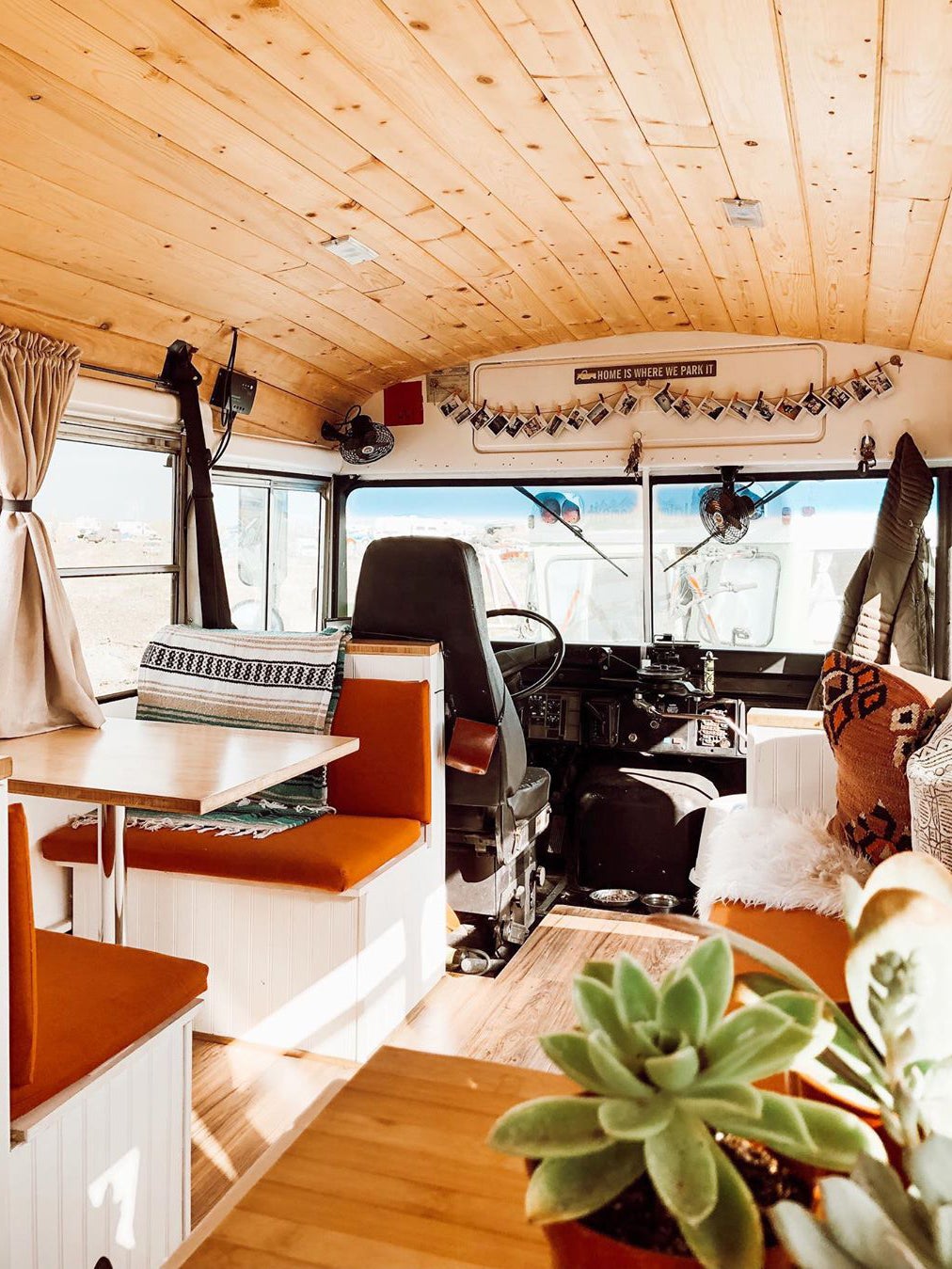 Tyler Hjorting and Lexi O’Brien chose to take the bus when they decided to leave their California home to travel the country. Not a Greyhound, a school bus—one that they renovated into a cabin-like home that fits a bathroom, kitchen, dinette, sofa, and a queen-size bed, lovingly named One Wild Ride.

After about a year and a half constantly on the road, the couple purchased land and parked their bus in Texas, where they’re getting started on their new venture: building a community of tiny homes, including one that they’ll live in themselves. The bus lifestyle is what made them fall in love with downsizing, and their impressive renovation shows it’s possible to turn a vehicle that spent its prime years toting kids to and from school into a place that feels like home. Here they share how they prepared to make their road life as comfortable as possible.

They scouted around before going for it

Hjorting and O’Brien had grown tired of shelling out for their expensive California rent, and decided they wanted to see more of the U.S. They initially started looking into renovating a van when, on Instagram, they discovered the world of “schoolies.” “It was this whole world of bus conversions that we had no idea existed,” Hjorting says. “We thought that would be perfect because it would be big enough for us to not feel super claustrophobic and we’d be able to build a kitchen and a bathroom and everything that we needed.”

They did their research for about a year, looking for the right fit. Finally, the couple spotted a bus on Craigslist (where most people buy their decommissioned school buses, if not through eBay or auctions), watched the price go down for three months, and finally bought it for $10,000, taking into account that the previous owner had already restored the motor. “That’s something people overlook,” Hjorting says. “They buy a bus from an auction for $2,500 and then it doesn’t make it to the next state because it’s just so old and abused.” Then, the couple set about overhauling it, which took just under eight months.

They knew when not to DIY

Before you can make a bus homey, you have to do a pretty thorough demo. “It’s hard work to deconstruct a bus, getting rid of all the seats and everything, but it’s something anybody can do,” Hjorting says. The one thing they left to the pros? Wiring the electric stove. “We didn’t want to burn down the bus!”

The couple also had to make sure they equipped the vehicle with all the tools they’d need to stay off the grid: large enough water tanks, a compost toilet, and 400-watt solar panels they bought off Amazon for $900, although they admit now they could have invested in more powerful ones. “Everyone else we’ve met on the road that has a really good system can power all kinds of stuff in their bus—even if it’s not the sunniest day,” Hjorting says.

They made it feel like a home, not a short-term rental

“A lot of motorhomes are pretty cheaply made, and we didn’t want to feel like we were on a long-term vacation,” Hjorting says. “We wanted it to feel like home no matter where we parked.” The couple installed a wood-paneled ceiling to give the bus a cozy cottage vibe, in addition to using a palette of warm colors, most notably in the dinette—a feature they didn’t originally plan to include in the vehicle but now gets a ton of use.

A small but separate bedroom area (complete with a queen-size mattress) also makes a big difference. “We have a handicap bus, so there’s a rear door that used to be the wheelchair lift,” Hjorting says. “One of our favorite things to do is park near a beach or a lake, open that door, and lay in bed.”

They decided they could scale down even more

Though Hjorting and O’Brien decided on a bus over a van, they soon figure out the latter might have suited them just fine. “After only three months of traveling, we realized that a bus was huge. We had way too much space,” Hjorting says. “A lot of people we’ve met on the road feel the same way—we have watched four or five people transition from a bus to a small van within the last year.”

Downsizing, after all, is a constant process—and one that gets easier the more you do it. On the rare occasions when Hjorting and O’Brien buy new clothes, they get rid of old ones, and they keep clutter to an absolute minimum by constantly editing what they keep onboard. Marie Kondo would surely approve.

Ultimately, living in a bus isn’t just a way to save money on rent or fit a bunch of sightseeing into a few short years—it’s a means of connecting to a larger, constantly moving community. “We’ve done four festivals with a bunch of other buses,” Hjorting says. “The nights when we get to hang out with a bunch of other people, sit by a fire and talk about travels on the road, look at everyone else’s buses and vans, and learn how they’ve adapted to this lifestyle—that’s our favorite part.”