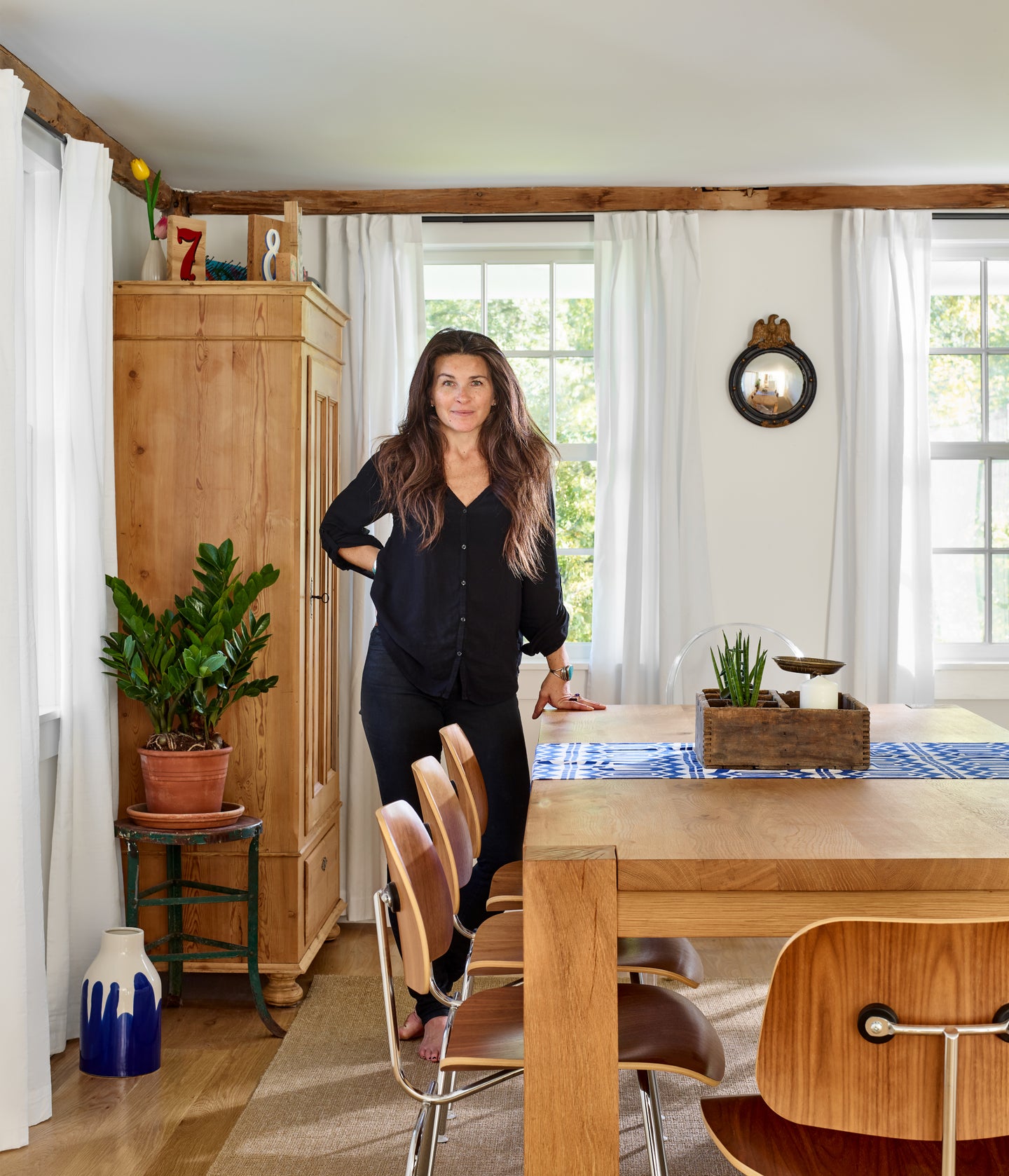 “I had just created this massive barn and was searching for something to give it a purpose,” says O’Brien, whose overhaul of her family’s sprawling Topsfield, Massachusetts, property took over six years. The final compound includes five structures: The main farmhouse, a cottage, an art studio, a detached garage, and a barn, which now houses an uber-cool half-pipe. “My husband had been brainstorming with friends about building something in the woods of our property to skate, but putting the ramp in the barn made it much more accessible and social. He called some friends to help build a mini ramp that over time has evolved into a minipark that’s home to craft beer, loud music, dance parties, and skateboarding.”

The farmhouse itself is a 1793 Greek Revival, and O’Brien’s family is only the third to own it. Throughout the renovation, the designer sought to pay respect to the original soul of the home while imbuing it with some much-needed updates. O’Brien and her husband bought the home after a one-week house hunt, and while it was hardly love at first sight, they eventually fell head over heels.

In the order of renovations, the farmhouse was actually last on the docket. However long gone the original architectural was (O’Brien says most of it had been buried by the past homeowners, replaced by fake brick linoleum and faux ceiling beams), she was determined to maintain and highlight what was left. She replaced the exterior to pare back the space to its initial simplicity, used the original 1793 floorboards to make the guest bedroom’s built-in shelves, and kept the original beehive oven.

Aside from the home’s original style, O’Brien looked to a different source of inspiration: Scandinavian design. “The use of natural light, natural materials, minimalist and purposeful furnishings, tonal palettes—I love all of it,” she says. “I also love an old farmhouse, and my goal was to merge the two to create a warm, timeless workhorse of a home while using Scandi clean lines to make it feel modern and relevant for our family.”

After the functional renovations were in place, she used Benjamin Moore’s Super White to provide a clean slate—a calming palette was essential in order to balance the family’s busy life. But what the walls lack in color, the home more than makes up for in fun furnishings that showcase their personality: A custom Pink Motel Pool coffee table in the living room, for example, or a plethora of prints and wall hangings created for the family by artist friends.

One such piece is the family portrait that hangs above the fireplace; it was painted by Portland artist Chris Reed and is one of O’Brien’s favorite items in the house. “Hidden in the floor of the forest are song quotes,” she says of the art piece. “Every time I look at this, I still can’t believe how lucky we are to have it—and more importantly, to have such incredible people in our lives.”

The non-custom pieces were acquired over time. O’Brien, who says she’s “always on the lookout for good stuff,” collected the decor and furniture from a mix of big-box retailers like Crate and Barrel, local flea markets and boutiques, and vintage shops. If you’re ever in Shelter Island, she recommends heading to Marika’s Antiques, which she calls a treasure trove of unfussy gems.

“The beauty of buying vintage is that you’re buying unique designs from an era when quality was important,” says the designer. Her tips for shopping vintage? Stick with established vendors to have a higher level of trust, and don’t be afraid to ask for verification. “You don’t want to pay top dollar for a vintage Arne Jacobsen piece only to get home and realize you just purchased a 10-year-old knockoff. But if you aren’t looking for those investment heritage pieces, I say buy what you love and never be afraid to repurpose.”

Clearly, this strategy has worked for her. A mix of old and new, a blend of New England architecture and Scandinavian design, the farmhouse is all about juxtaposition, but what makes it so successful is that nothing feels contrived. For O’Brien, that’s the biggest piece of design advice of all.

“Don’t get me wrong, I like to follow some trends, but when it comes to one’s home, I believe there is nothing more comforting and peaceful than classic and timeless design,” she says. “If you build from that, and then layer with special pieces, you create a space that not only stands the test of time but one that speaks for you and to your soul.”

See more homes we love: A Palm Springs Home Restored to its Former Glory Days How Downsizing Actually Helped This Family Create Their Dream Home This Interior Designer Throws Parties for 80 People in His 480-Square-Foot Studio