Embrace the bold, from cobalt shelves to cowboy-print wallpaper. 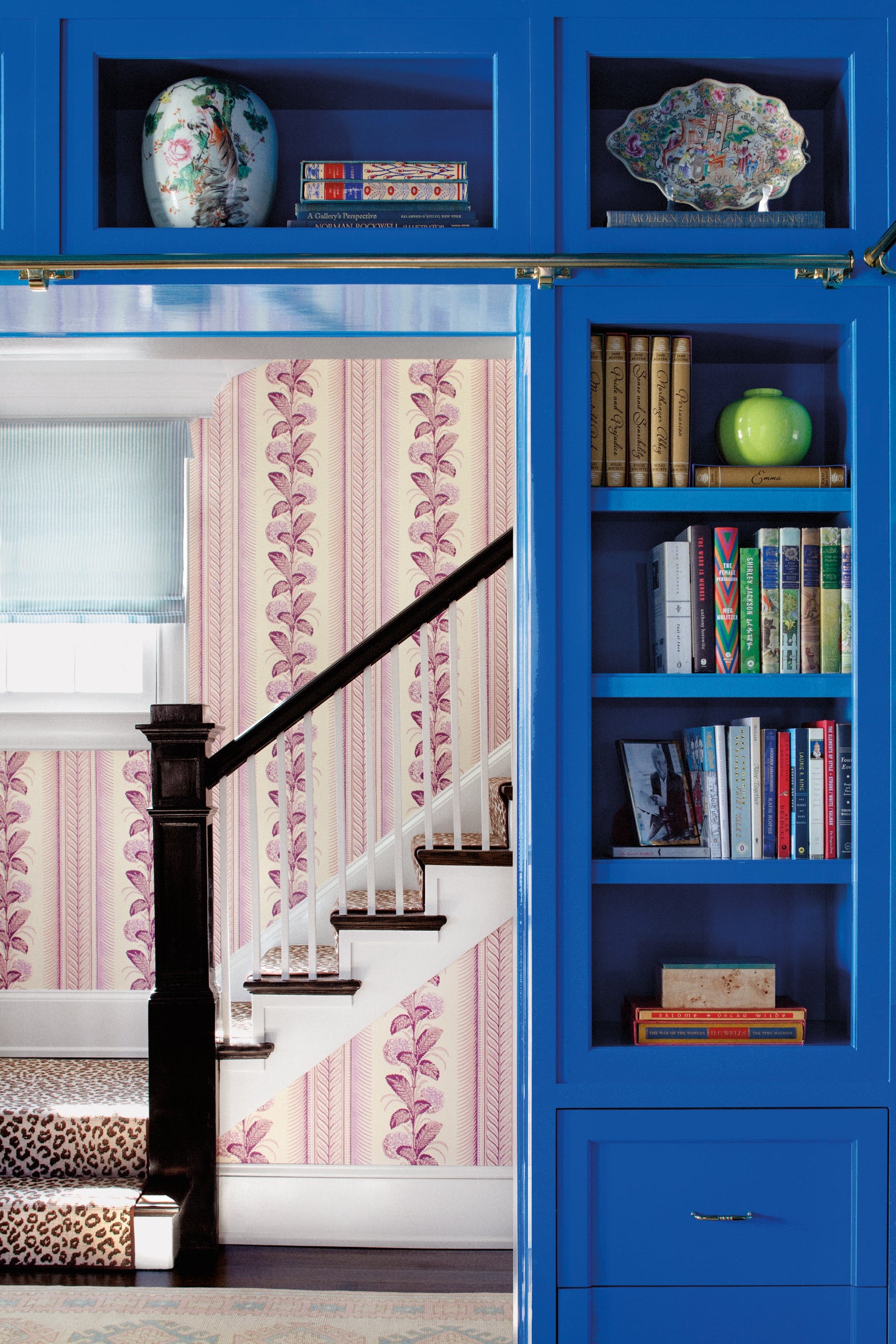 This story originally appeared in the Summer 2019 issue of Domino, titled “To the Max.” Subscribe to be the first to receive each issue.

In many ways, the Cleveland Park project that interior designer Cameron Ruppert started in the fall of 2017 was serendipitous. The homeowner, a 35-year-old tutor and Harvard graduate, originally intended to decorate the entire space in the historic Washington, D.C., neighborhood herself. But as the two women, who met through a mutual friend, started talking, they realized they ought to work together. “She had so many ideas,” says Ruppert. “She just didn’t know how to pull it all together.” Fortunately, the client was eager to work with the team she had assembled to completely gut-renovate the Arts and Crafts home: Ruppert; Suzie O’Brien and Dale Overmyer of Overmyer Architects; and art consultant Lauren Hilyard. “The house had potential,” says Overmyer. But the dated and awkward layout needed a major overhaul. Several of the tiny bedrooms lacked closets, while a handful shared the same bathroom. Overmyer made it his mission to give each room “more windows, more space, and more storage,” as well as keep the summer-retreat feel of the district’s early days.

A year and a half later, the project was finished—including a refreshed exterior complete with hanging pineapple-top porch lanterns. The interior was cracked open, with some seriously striking results: The wall dividing the galley kitchen and family room came down, and the bedrooms, two equipped with en suite bathrooms and walk-in closets, were streamlined from six to four. The back of the house was expanded to create a kitchen breakfast nook and add more space to the master bedroom and whimsical children’s room.“It’s not the type of home you walk into and say, ‘Oh, my God, I can’t touch anything,’” says Ruppert.

That same air of fun infuses almost every corner, thanks to an exuberant use of wallpaper, textiles, and bright hues. “I know what I like: pattern and color,” the owner told Ruppert, “but I want it to be something I’m going to love for a long time.” The dining room, painted a glossy Yves Klein Blue, announces her singular vision.

Countless hours were spent mixing samples in search of just the right Pinterest-inspired combination—“People keep asking what color it is, and I can’t really tell them,” jokes Ruppert—which informed the client’s choice of poppy red and cobalt blue fabrics. For the window nook, one of the room’s many library-style built-ins, Ruppert paired a dramatic Schumacher velvet with a delicate rose print, which also appears on the dining chairs. A white plaster Diego chandelier hangs over a Henredon table. “The space feels buttoned up because it’s finished and complete, but we kept it from looking too formal,” notes Ruppert, who aimed to strike a similar tone throughout the home.

Similarly, the living room began with a more traditional blue-and-white palette and took on new dimension when the client suggested painting the ceiling light pink. Ruppert incorporated the color everywhere she could, customizing blush-hued table lamps and a flat-weave rug, and adding a punchier pink to enliven the curtains and pillows. To the untrained eye, the presence of so many prints might seem overwhelming, but Ruppert kept the client’s ornate impulses in check by being selective about their placement. “The anchors of the room are more neutral,” she says of the burl wood side tables and white shelves, while pattern turns up on small accents, like the tiled fireplace.

The master bedroom, however, is where the owner really went for it: “I want this to be the girliest room in the house,” she told Ruppert. The starting point, as with the powder and laundry rooms, was a series of elegant wallpaper panels from Zuber & Cie that are “just beyond perfect,” says Ruppert. “Once we found the wallpaper, I played off all the pinks and purples and grassy green tones.” From there, she brought in feminine touches, such as lavender window treatments with valances and “over-the-top” trim, a custom flower-print rug, and a vanity table.

The culmination of that collaborative spirit can be found in the children’s room, a magical hideaway created for the client’s seven godchildren and young niece and nephew, some of whom are known to rig up a zip line for their stuffed animals on weekends. The sloped ceilings allowed for built-in bunk beds with curtains—a bucket list detail for Ruppert, who riffed off the client’s choice of cowboy-themed wallpaper with tartan carpet, leather drawer pulls, zigzag trim, and gingham pillows. Much like the home, the room is a playground for the imagination—and an interior designer’s dream.

California Chill in the Concrete Jungle: A Home Tour Every Inch of This Home Is Filled With Art This 700-Square-Foot Apartment Is Home to Over 70 Plants