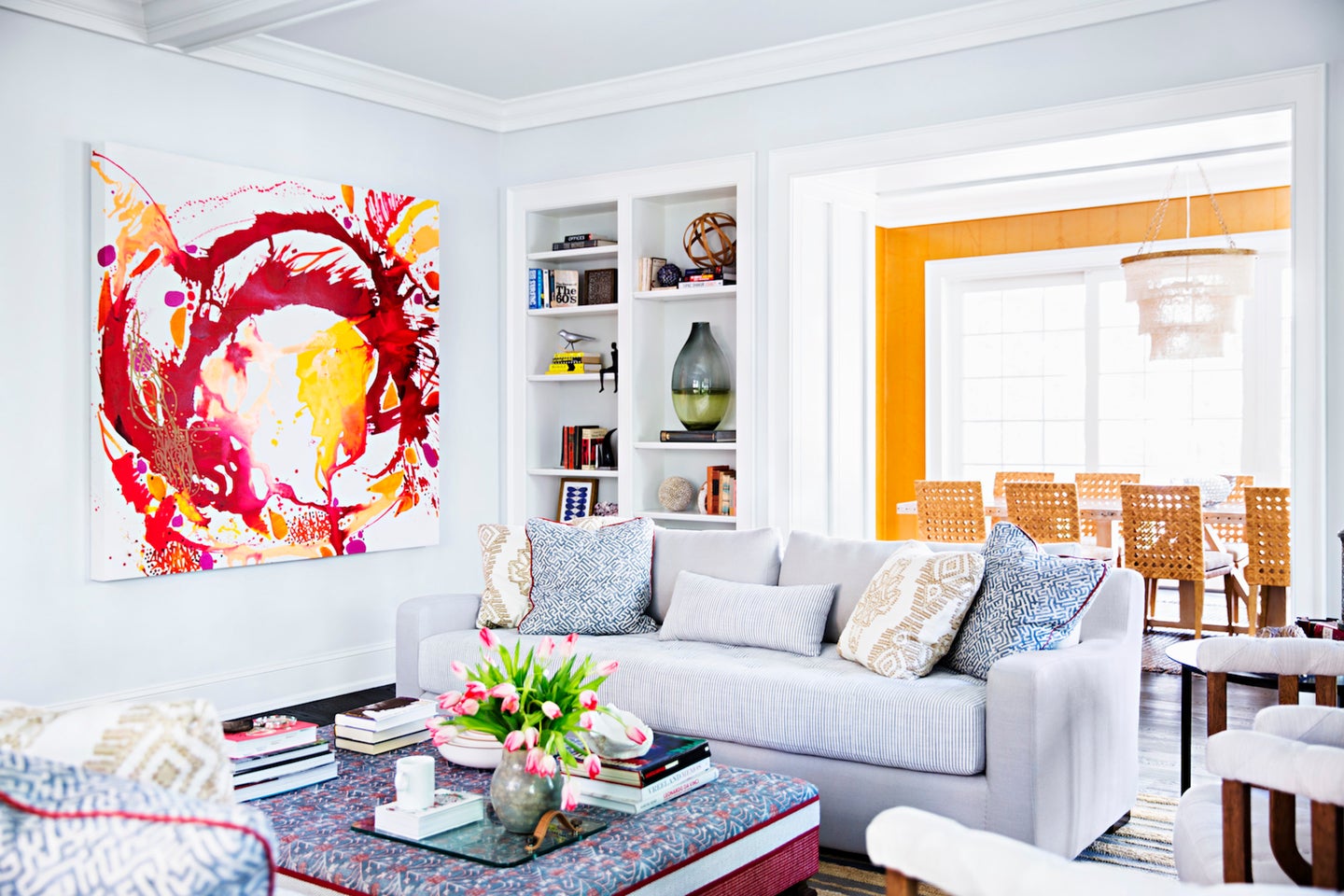 The directive wasn’t so much anti-Hamptons as it was globally inspired. “The clients wanted more than just your typical blue and white color scheme,” says Dolores Suarez of the 5,000-square foot, six-bedroom East Hampton home she designed with Caroline Grant for a New York-based couple with two small children. Creating a layered space that didn’t feel “too designed” (another request) in just six months was a tall order, but the co-founders of

were up for the challenge as veterans in both commercial and residential projects.

The homeowners love to have friends and family over for the weekend, so maximizing the entertaining spaces was a must from the beginning. “Most people with smaller rooms are afraid to put too much furniture, but we actually filled it more,” Grant explains. “Surprisingly, it makes things feel bigger.” The custom nine-foot-long couches are placed symmetrically and lend calming, clean lines to the room without it seeming cramped.

Another trick was to fix an unusual overabundance of built-ins. “We wanted to open the space a bit,” explains Suarez of how they reconfigured certain areas, creating more floor room in the living room and, in the library, transforming a bookcase (one of the built-ins that made sense) into a bar.

To avoid a disjointed feeling between the living room and adjacent dining room—where the wallpaper (made from tobacco leaves that are pressed then painted) gives the space a rich, textural finish—the duo brought in touches of the same mustard-y color by way of art and pillows. “People get worried to go bold because they’re afraid the whole house needs to be as colorful, but that’s not the case at all,” Suarez says. The walls in the living room, for example, are Farrow & Ball’s “Blackened” (actually a cool white) and the hallways were painted with Benjamin Moore’s “Horizon.”

Because the house sits on a hill and had experienced some flooding in the past, the flooring had to hold up to the elements. Grant and Suarez selected an engineered wood (technology that “has come a long way,” according to Grant) in a rich ebony. “The darker color, while unexpected, nicely balances the more beachy furnishings.”

Designing a home top to bottom in record time can make a space feel hastily done—plus, the owners didn’t bring in a single piece of furniture—but Dekar Design sourced fabrics, tile, and other accents that could have been picked up on far-flung trips and scored in antique shops. With six bedrooms to outfit, they also made sure that each space was distinct, mixing up textures and styles. “In one, we contrasted the formality of the four poster bed with pom pom curtains. Then we added a mid-century chair to make it a bit more modern,” Grant says of their mix-and-match approach. “We love the idea of showing up at someone’s house and being told ‘you’re staying in the blue room.’”

The duo hit their May deadline (complete with homey touches like vases on nightstands), allowing the owners to enjoy their first summer in a completely decorated house. “It was like a reality show,” Grant says. “They showed up for the first time in months and everything was finished—all the beds were made.” Suarez adds, “Their faces when they walked in made the time pressure worthwhile.”

“We did a really plush upholstered bench, a mix of pillows, and a pair of sconces to help cement what was once just a stair landing as a distinct space” Suarez says. Some pillows were made with vintage fabrics for a one-of-a-kind look, others were sourced at Zak + Fox.

The wallpaper is SJW Studio’s Cortina print in “Trigo”. The dining table is custom, the chairs are from Mecox, and the chandelier is by Made Goods. The leather woven rugs, known for durability, are by Lance Wovens.

“The clients actually picked out the Jonas Bournat painting, they just wanted us to find a place to put it,” Grant says. “Hung in the living room, it pulls in that rich mustard from the dining room walls, which helps the whole open space feel cohesive.” The mantel was painted in Farrow & Ball’s “Down Pipe.” Fabrics came from Zak + Fox, Michael S. Smith Fabrics, and Hines & Co.

The library is an exercise in integrating texture. The faux bois wallpaper is Nobilis’ “Chene Gris” and the coffee table has a faux shagreen top. Instead of going with a typical jute rug, they used another woven leather rug from Lance Wovens.

“One of my favorite spaces is the master bathroom,” Grant says. “It went from bland to showstopping with a large Victoria and Albert tub.” The chandelier is by Mr. Brown Home.

To add visual interest, the duo used reclaimed barn siding behind the custom vanities. The floor tile is from Mosaic House.

The kitchen was left mostly as is, but they built out a bench with upholstered fabric, using a Josef Frank pattern paired with simple stripes. The fabrics were laminated for extra durability. The chairs are Mecox and the stools are from Wayfair.

Benjamin Moore’s “Nimbus Gray” lends this guest room its soothing color. The headboard, upholstered with a vintage Uzbeki textile, is L’Aviva Home. The photograph was taken by the client on a trip to Cuba.

For the client’s young son, Dekar Design made a custom upholstered bed featuring Osborne and Little fabric. The floor lamp is from Overstock. The photographs were sourced at Clic Gallery.

In what was formerly a hallway is now a small office. The wallpaper is from Eskayel and the built-in cabinet and shelves are custom. “On the other walls, we did plaster,” Grant says. “So you have this nice pairing of a

and a neutral color with texture.”

“We often do mismatched bedside tables; it feels more collected and less like a one-shot shopping trip for a bedroom set,” Suarez explains. This design came from Jayson Home. The caned headboard is One Kings Lane.

Suarez and Grant go with a good bargain when they see one, like this four-poster bed from Overstock. They swapped out the plain headboard fabric for a patterned option from Zak + Fox to elevate the look.

A Brooklyn Home That Feels More Like a Mediterranean Tree House