This London Apartment’s Color Palette Changes as the Light Does

The back bedroom is a blue jewel box. 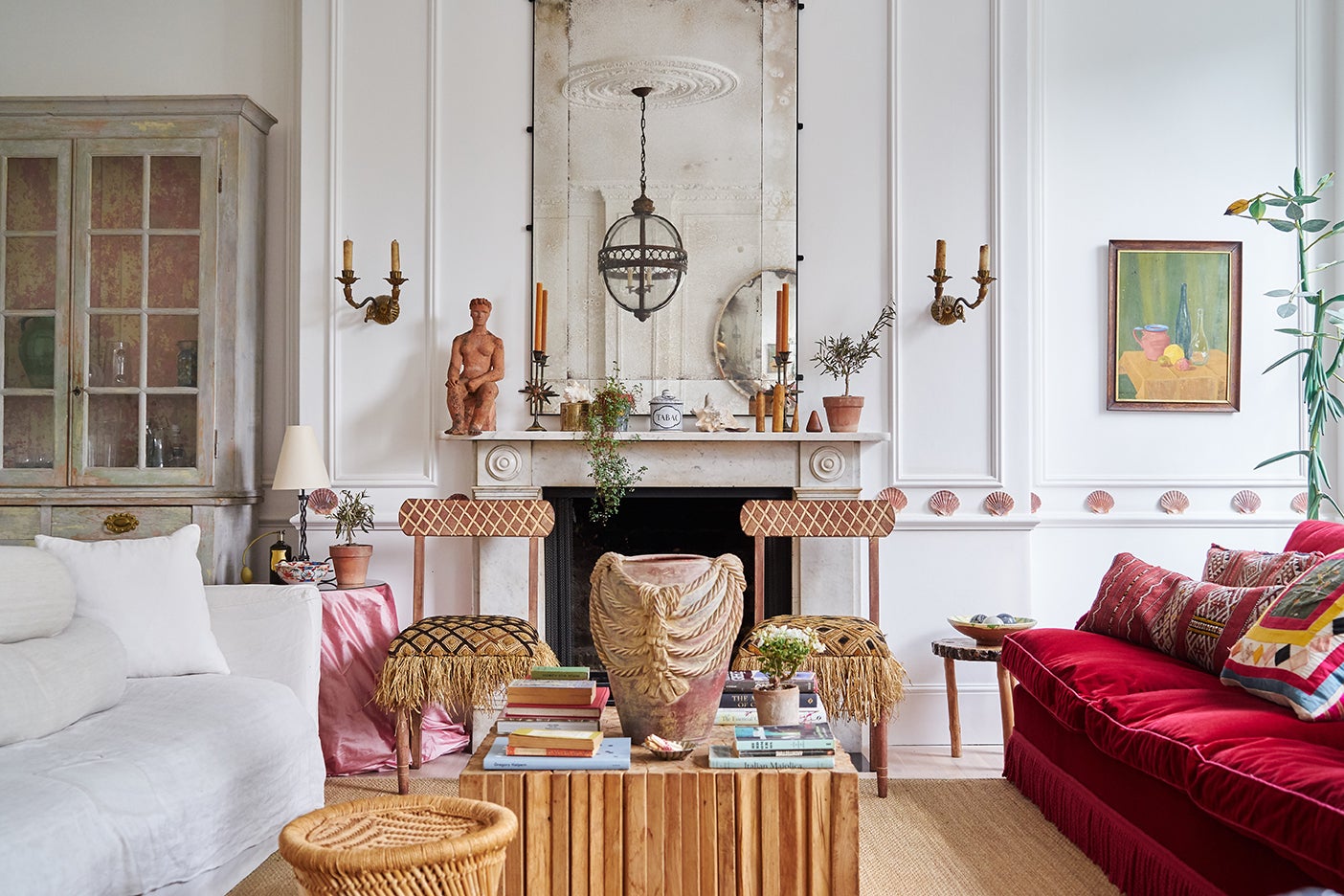 Emma Grant doesn’t like to rush her decorating process. Her apartment in London’s Primrose Hill is seven years in the making and it’s still in progress. “For the first few months, there was really only the dining table in the living room,” she remembers. It wasn’t just any old hand-me-down, though, but rather a 19th-century wavy marble bistro table from Lyon Grant, found in a local antiques store. “I’ve never seen anything quite like it,” she adds. “It’s typically where we spend a lot of time with friends.”

The thrill of hunting down unique pieces is what drew the interior designer to leave a career in fashion to open her own interiors firm earlier this year. And the home she shares with her fiancé, Jack, has been her experiment lab. She has filled it over the years with her latest treasures: bathroom shelves made with fragments of a Verde marble plucked from Tate Britain, an antique Suzani blanket (which inspired her bedroom palette), and a pair of gold sconces scored at auction.

Grant didn’t have to do much reno-wise before moving in. The two-bedroom, part of an 1870s row house on a rainbow-hued street, already had a lot going for it: It’s on the first floor (which the designer says guarantees higher ceilings), and the front terrace (her must-have for fresh air) looks over Primrose Hill toward the London Zoo. “You get this unusual London view of just trees and green, which is really special,” says Grant. “The living space is south facing, so it’s extremely uplifting and bright throughout the day.”

Still, Grant put her stamp on the place early on: restaining the oak floors and commissioning a ceiling rose to match the vine cornicing in the dining room. Instead of sticking with the liberally painted blue and turquoise walls the previous owners had left behind, she put together a palette that goes from light to dark as you move north to the back of the apartment. “You come in through a very narrow hallway, so you don’t really expect what’s beyond,” she explains.

The corridor, a neutral bridge between the two universes, is painted in Eau de Nile by Edward Bulmer. “His colors are made with natural pigments, so they’re beautiful but also eco-friendly,” says Grant. In the main bedroom at the back, she chose a pale blue—a nod to the previous owners’ color scheme—and created contrast by adding pops of cherry red throughout.

At the front of the house by the living area, Grant brightened up the kitchen by salvaging the cabinets and giving them a new lease on life. She swapped the bulky uppers for reclaimed wood veneer shelving and cut the imposing black backsplash down to a thin border. “I have lots of glassware and ceramics that I felt didn’t need to be hidden away,” she says. The lower cupboards got a coat of School House White paint by Farrow & Ball, along with vintage brass hardware, while underfoot, wavy tile inspired by a trip the couple took to Sierra Leone covers the floors.

That isn’t the only nod to West Africa in the apartment. “Jack has been traveling to Sierra Leone for some time for work,” says Grant. “I visited him in Freetown and came across the living room’s raffia-skirted chairs in a gallery. I was dead set on getting them home with me.” Logistically, though, it was too complicated, so the designer left them behind. Fast-forward six months later, when her fiancé came back—he had the seats in tow.

“You come in through a very narrow hallway, so you don’t really expect what’s beyond.”

Grant’s magpie tendencies even extend to the living room’s chair rails, where she leans seashells collected from her trips to the sea. “I had kept them in a large glass jar for a long time. Now they’re propped up there, and I think they’re rather jolly,” says the designer. The rest of the white space is layered with vintage mirrors found in antiques stores, terracotta vases gifted by friends, and an eye-catching ruby red velvet sofa. “It was originally from Harrods, but I bought it secondhand,” says Grant. “I really liked the big bullion fringe.” The extra-deep seat didn’t fit through the narrow staircase, so instead the couple had it hoisted up through the French doors on a ladder-like contraption with some rope.

Last year Grant undertook her latest project: a remodel of the two bathrooms, one which she outfitted with a wavy sink crafted from a single block of marble (a splurge) and the other in which she installed a blue-bordered sink she scored from someone else’s bathroom reno for $25. She did have to sacrifice valuable wardrobe space for a shower, but the extra-roomy stall was worth it.

A few months ago, Grant welcomed her most recent addition: a 19th-century Shaker-style four-poster bed for the second bedroom. “It’s so satisfying to be able to bring a room together with pieces from all over and to create something that’s different and a joy to add to over time,” she notes.