Against Her Painter’s Advice, Louise Roe Chose This “Ugly” Color for Her TV Room

And now it’s her favorite spot in the house. 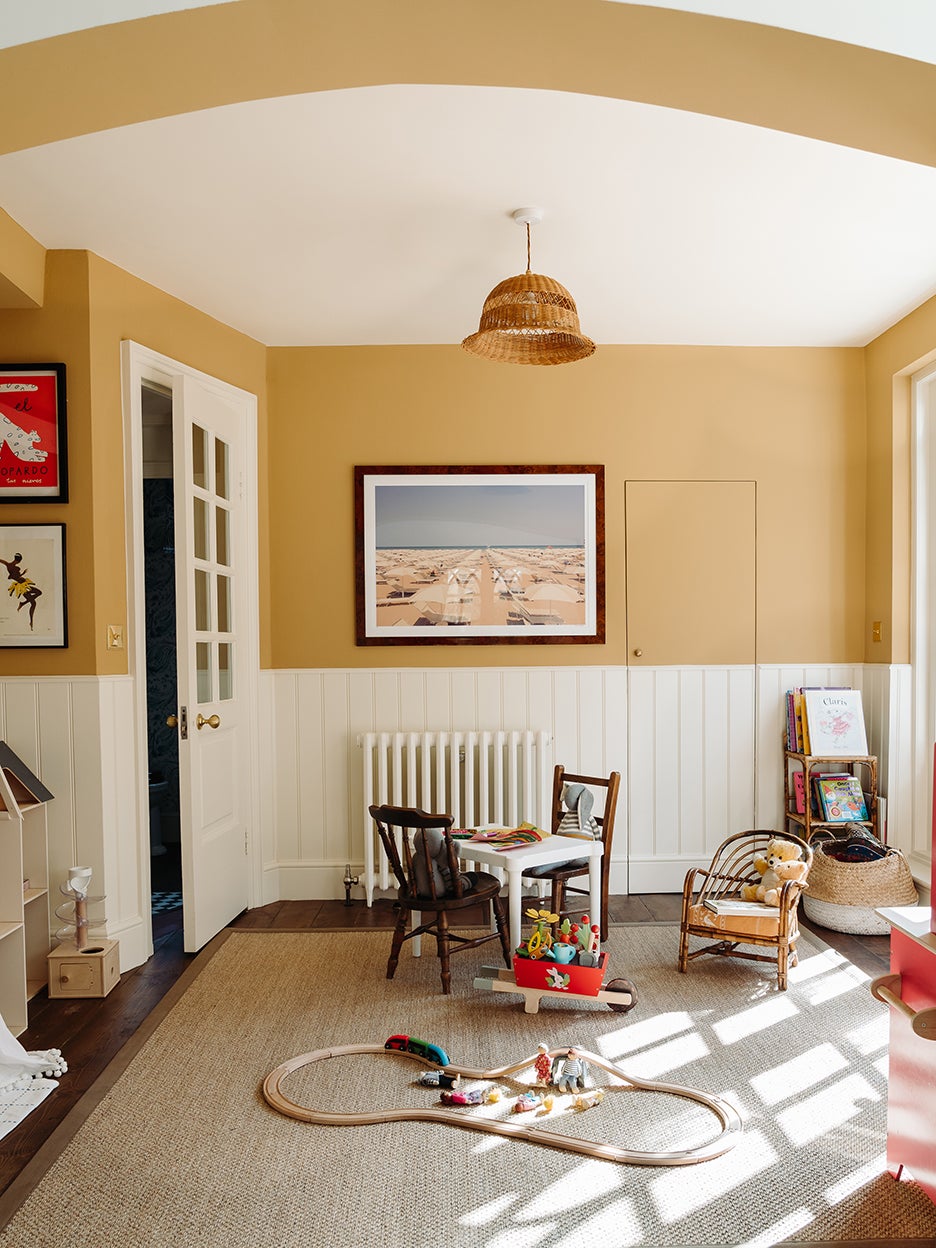 Wallpaper swatches, yards of fabric, antique furniture: These are all the things Louise Roe collected for years before finding her dream house in Oxfordshire, England. At the time, the television presenter, fashion journalist, and author was still living in Los Angeles with her husband, Mackenzie Hunkin, but she always had a hunch they’d end up back in the charming British countryside where they both grew up, just an hour from bustling London.

When Roe got pregnant with their daughter, Honor, two years ago, they knew it was time to make the move. After more than a decade in California, they flew across the pond in search of their forever home, which came in the form of an 1819 Georgian farmhouse. “We drove up to the house and I got really teary,” Roe remembers of the instant feeling she had—as if she were coming home. “My husband was like: You have to stop crying; it’s bad for negotiating!”

Because she had been scheming her design for years, Roe knew exactly what she wanted—and after chasing a contractor down a Downton Abbey–esque driveway nearby (she thought if he was good enough for that house, he’d be more than qualified to remodel theirs), she embarked on a six-month renovation.

The first 12 weeks were spent on tasks that had to be done before the family moved in: gutting the kitchen, moving plumbing fixtures, and ripping out floors. On an initial real-estate visit, Roe had been clued in that underneath the flagstones in the entryway was original Victorian tile. “It was one of the most exciting moments in the whole renovation,” she remembers. The builders were extremely careful and gentle in removing the top layer but managed to reveal the entire surface, which surprisingly didn’t need that much cleaning up.

Keeping the Layout As Is

Roe decided not to alter the footprint (save for raising a doorway where Hunkin kept hitting his head). She liked that the separation created different zones, all with their own purposes and personalities. With the kitchen layout already mapped out, she focused on finishes: British Standard cabinets painted in a sage green that draw the outside in; an extra-deep Irish farmhouse sink that she positioned underneath the window; and her number-one must-have: an AGA stove. “I always wanted one and I had to learn how to cook on it, but it’s really warm and cozy,” says Roe. (The oven has four compartments all set at different temperatures and stays on year-round.)

Everyone, from family members to tradesmen, tried talking Roe out of having an island, stating that the room was too narrow, but she persisted and had a custom high table made from the same planks as the floors. “I’m really happy to have that workspace behind me when I cook,” she says. Underneath, counter stools, which followed them from L.A., are upholstered in a water-resistant Peter Dunham fabric.

In the adjacent room that was once a breakfast nook, Roe envisioned a playroom for Honor in a vibrant shade of curry yellow she had seen in a photo of an abandoned house. “I was really intrigued by it and wanted to track down something similar,” she says. “Because we have the paneling on the lower half of the wall, it’s not too overwhelming.” Though many of her color choices were very intuitive, Roe did have the help of Edward Bulmer (of the eponymous paint brand) himself, who came over and advised on historical colors for each room.

Looking to the Past

The grandest space—the drawing room—got a coat of brick-hued paint, which Roe had first spotted in a hotel and found through a PR contact. “It looks completely different in the morning than at night,” she says. A ceiling rose, which once hung in the center of the room but had since been torn down, became another project for Roe: After a neighbor described what it looked like, she had one commissioned to match the original. “It was a lot of fun tracking down the roots of the house and paying homage to them as best I could,” she notes. Adamant that this room shouldn’t have a TV, she centered the seating around the fireplace instead (even adding electrical sockets on the ground to allow for floating floor lamps). Since the pandemic, Roe has set up a workspace at an old bureau desk—her biggest splurge in the entire house—in one of the corners.

As for the TV, it’s hidden away in a comparatively compact snug (British for a media room) where Roe had built-in cabinets constructed to hide electronics and display her book collection (she used the same custom cupboards in her dressing room, where a dusty rose paint color matches the fringed ottoman). “I’m a real bookworm,” she says. “I wanted a quiet and cozy room with floor-to-ceiling shelves on both sides.” The joinery was painted in a finish so glossy it took a week to dry. (She coated the walls in a matte finish for contrast.) “My painter later said to me, ‘Oh, my God, I thought the color was so disgusting when you first gave it to me,’” she remembers, laughing. He has since come around after seeing the finished product: The muddy brown reads more like a rich dark green. “I have a lot of old Penguin Classics that look great against it,” she says.

Creating a Window Back in Time

While the majority of the downstairs common rooms are painted in muted primary colors, in a small powder room Roe hung artwork and mirrors on a wall covered in blue Nina Campbell wallpaper—making it feel almost like a step back in time to the couple’s former California life. “It’s so small that we had fun with it,” she says. The matching roman shades are a reminder that this is a traditional English farmhouse. But the oversize Slim Aarons photograph feels playful and carefree.

A guest bath is also wallpapered in a floral Cole & Son print. Roe pulled a bright cherry red hue from the pattern to inspire the window covering and sconce shades. “I found those from a lighting company called Pooky, and they were the last pair, so we had to go in its storage unit to try to find the right color,” says Roe. All that matchy-matchy only works because she purposefully kept the hardwood floor. “If you didn’t have that shade of brown to ground it all, it would have felt too bright,” she explains.

Another guest room is painted in a blush tone, but Roe played it up with a squiggly green and white fabric from Soane. “I’ve always loved it,” she says of the pattern, which she applied to both the curtains and the scalloped headboard. The color references the adjacent teal bathroom, where Roe ripped out the old tub and replaced it with a historically accurate claw-foot one.

Saving the Best for Last

But Roe’s favorite bedroom is the one that will become her daughter’s room once she’s old enough: tucked away in the eaves, she calls it the Mary Poppins room. “Right after we finished it, it started snowing, and I felt like she was going to fly down and come in through the window,” says Roe, laughing. The Pierre Frey wallpaper and matching headboard pattern was the first one she picked out for the house—she had seen it years ago in a magazine spread and held on to the torn-out page until she could finally use it.

The most affordable thing in my home that gives me the most joy: My books!

The object in my home that gets the most use: Our Oka sofas.

If I could go back in time…: I’d love to see our home all decorated and lit up with candles for its first Christmas, way back 200-plus years ago. I can imagine the horses pulling up with their carriages. We even found a very old photo of the house with men outside in top hats!