Get whisked away in a rainbow of colors. 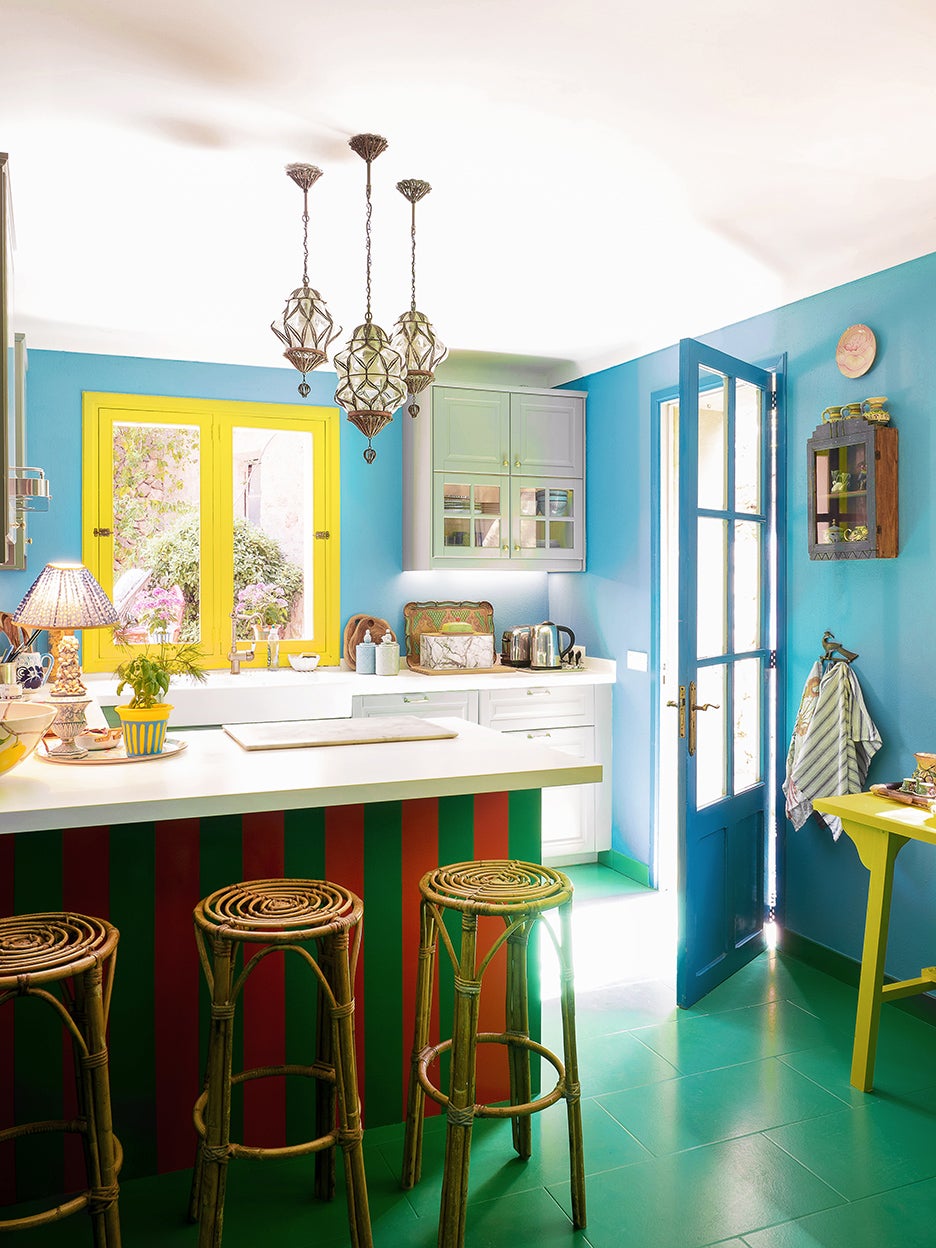 In between ending his fashion business and kick-starting his career in interiors, British designer Matthew Williamson found himself on a flight to Majorca. “I landed in Deia and never looked back,” he says. It started out as a 48-hour mini break from fast-paced London. Now, seven years later, Williamson; his partner, Joseph; and their 5-year-old daughter, Skye, spend about 80 percent of their time in Spain. “It was one of those twists in life,” he adds.

The rustic home they share isn’t for the faint of heart. “I’ve never been one for a beige room,” says Williamson, who is best known for his unrivaled use of color and ability to mix and layer patterns—a sensibility that rubbed off on him from his mom. “She’s a very colorful character. She has a big appetite for looking good and making the best of what she’s got,” says the designer.

Williamson really learned the meaning of the latter when he set out on an 18-month-long renovation of the property that mostly encompassed all the “dull” things, like fixing the plumbing and electrical, waterproofing the roof, and adding landscaping where there was once an unattractive, 360-degree concrete carport. Separate from the fact you can see the sea from the bedrooms and that the place was the perfect size (it’s not too big, not too small), “it was a bit of an ugly duckling,” recalls Williamson. “But I just thought, what’s the worst that can happen?”

While he falls firmly in the maximalist camp, when Williamson does dabble in minimalism, he does so with saturated hues. One of the hallways upstairs boasts bare walls and doors, but instead of leaving the surfaces plain white, he covered them in sunny yellow, deep blue, and aqua. Keeping with a limited palette that consists of similar tones is one way anxious decorators can get acquainted with color. “Pick three or four that you love, but keep them close to one another,” he explains. Don’t do orange and purple and green; do pale green, mint green, and dark green.

Likewise, the designer’s approach to pairing prints is surprisingly simple. “A floral with a stripe is a classic trick,” he notes. Add in some animal print (leopard or zebra) and ikat for an arrangement that will never date. The mix doesn’t overwhelm if you’re neat (you won’t find a bolster out of place in Williamson’s home). “I like things to have order,” he explains. “It is a sort of organized bohemia.”

Working within his means, just as his parents taught him, Williamson doesn’t always opt for the most luxurious materials. The simple gray kitchen cabinets, for instance, are from IKEA. “They do the job,” he says simply. It’s all the details around them that make the room feel dressed up, like the painted floor tiles, striped peninsula (inspired by the work of Spanish film director Pedro Almodóvar), and punchy window trim.

In the run-down casita out back by the garden, Williamson has set up a full-on studio where he applies his creativity to a different surface: canvas. “It’s a place where I can really just have a moment and switch off for an hour or two,” he says. He’s even added his creations to his website (some sold out in a week). “My new job on my CV is artist,” he says, laughing. Furniture also cannot escape his paintbrush. He turned the antique bed that traveled with him from the U.K. red.

The whole home is an ongoing experiment that inspires the designer’s work with brands (he has a wallpaper line with Osborne & Little, lighting with Pooky, tabletop with Les Ottomans, and more). “It’s very much a laboratory,” he says—one that Joseph is happy to enjoy and witness, but not always participate in. “He’s not particularly interested in the nuances of cushions,” says Williamson with a laugh. “I think that’s why I’m still with him.”

Skye, though, has already shown a strong interest in Dad’s work. Williamson knew he wanted to paint clouds on her bedroom ceiling, turning it into a carefree, whimsical wonderland, but he let her weigh in on the wall treatment. “If you can imagine picking out wallpaper with a 4-year-old, it’s not the most robust of projects,” he says. Together, they landed on a print featuring bird-of-paradise.

On boiling-hot days, they retreat to a partially enclosed area in a nearby area that Williamson has turned into an indoor-outdoor living room. It has served as everything from a party overflow spot to a play space for Skye. The textured wall covering that looks like an art piece is actually inexpensive twig fencing that hides the unsightly exposed pipes that irrigate the garden. “Nine months of the year, we’re outside,” he says. “It’s a much-loved space.”