During Lockdown, This NYC Family Is Seeing Their Weekend Home in a New Light

Heading upstate paid off in more ways than one. 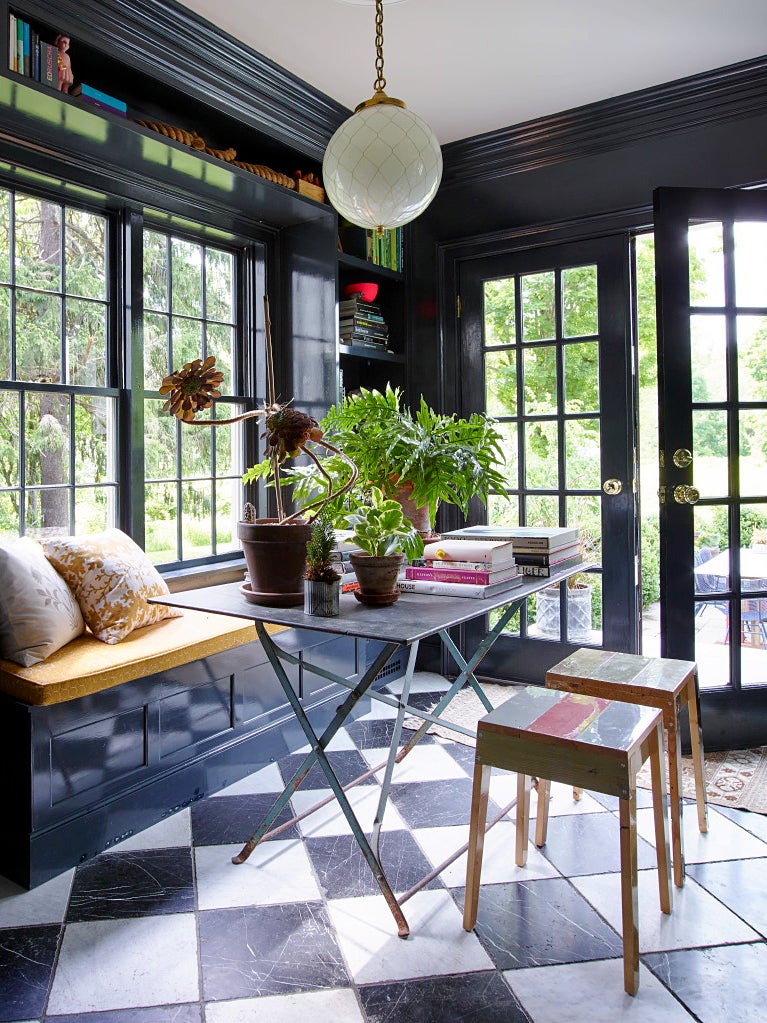 Dale Saylor’s power washer serves as a stress ball of sorts. During self-isolation,  the cofounder of design-build studio Hollymount has found peace and calm in tackling spring-cleaning chores in the North Chatham, New York, home he shares with his life and business partner, Joe Williamson; their son, Henry; their two golden retrievers, Georgia and Sam; and their cat, Boss. “It does a world of good for anxious and frayed nerves,” he says, laughing.

Between cleaning gutters, clearing fallen trees, and prepping the garden beds for summer, the couple is learning to juggle a new routine of homeschooling, bread baking, and afternoon hikes. Since social distancing began, it’s become abundantly clear how the abandoned upstate house, which the couple purchased 12 years ago, was the best decision they ever made. Once a weekend getaway, it’s become their semipermanent home base.

The 1827 Federal’s original state of neglect would have deterred most potential buyers: Several floor joists were rotten, which would require jacking the house off its foundation. There was no insulation, and the wiring and plumbing dated from the 1930s. The chimneys above the roofline had no mortar—gravity was the only thing holding the bricks in place. The downstairs powder room was (literally) falling off the house. But for a couple well-versed in gut jobs—they had just remodeled a 1920s bungalow up the road—the potential for large gatherings, meandering walks on the hilly property, and the prospect of a simpler life was all the motivation they needed.

advertisement
“Every time we’d pass this lonely and abandoned house, we’d fantasize about what we’d do if ever it came on the market.”

“Every time we’d pass this lonely and abandoned house, we’d fantasize about what we’d do if ever it came on the market,” remembers Saylor. “The moment we walked in this house, we could picture family holidays, and that’s before we even had a child.” Three weeks after their first visit, they signed the dotted line and embarked on a gut renovation that would take five years.

They took the house down to the studs, raising the ceiling by two feet, converting the garage into a mudroom and office, and adding a master dressing room and two ensuite baths. But modern conveniences aside, Saylor and Williamson retained the house’s historical integrity: They kept the center hall layout on the ground floor intact and preserved a window seat on the upstairs landing with a view that further sold them on the house originally: “It looks out onto a five-acre meadow bordered by a creek with woodland beyond,” says Saylor. Over the years, it’s become one of his favorite spots.

The kitchen got one of the most dramatic makeovers with custom cabinets painted in Farrow & Ball’s Old White and quartzite countertops. It’s always been the heart of the home, but since isolation began, it’s become a central hub for cooking and schoolwork. “We’re not a family that eats out a lot,” says Saylor. “But we’ve never gone this long without so much as ordering a pizza.” Instead, sourdough starter brews on the large island (which also doubles as a homeschooling base) to make up for the short supply of decent bread at the local store. “The shortages have forced us to be disciplined, resourceful, and inventive,” he adds. “We’ve even taught Henry how to make pasta from scratch.”

The mudroom, which operated as a catchall for gloves and muddy boots, a laundry space, and a dining hall for the animals pre-coronavirus, has also seen its fair share of increased traffic lately: It’s where the family empties and cleans groceries before entering the house so germs don’t make it into the kitchen. “If there’s one thing we’re grateful for right now, it’s the super-deep, enameled, cast-iron slop sink,” says Saylor. “It’s perfect for washing hands or scrubbing our son’s muddy feet after chasing frogs around our pond.”

Saylor uses the office as his workstation on weekdays, while Williamson has set up camp in one of the guest rooms, which aren’t seeing much activity these days, save for the visit of a golden retriever in search of a good napping spot. Since being home 24-7, the pair, who both live and work together, have relished these separate workspaces. “We know how fortunate we are that we could get out of the city and shelter in place with a fair amount of room,” says Saylor.

Henry’s bedroom, which was inspired by Bon Ton, a kids’ store in Paris, holds a special place in the couple’s heart: “There has never been a room, personally or professionally, that we’ve put more into than our son’s room,” explains Saylor. “Planning it is what we did to bide our time while we waited to be chosen by a birth mother.” This year, they’re giving it a face-lift for the first time: “Henry decided it’s ‘too baby’ now, so we told him we’d redo his room and he’d get to design it.” Before quarantine ends, it will have dark walls dotted with stars and planets, a fitting theme given the room is reserved for sleeping and reading only (toys live in the den).

With the weather improving, Saylor is shifting his focus outdoors. The once weeds-filled yard has blossomed since the family moved in: They’ve planted nine trees, 65 shrubs, and over 300 perennials, excavated the pond (a marshy, impossible-to-mow-mess), and added a bluestone terrace that leads to the main lawn. If quarantine continues into the summer, they’ll have plenty more to do and enjoy (afternoons potting around in the garden, evenings spent dining outside), all thanks to the leap of faith they took a dozen years ago.