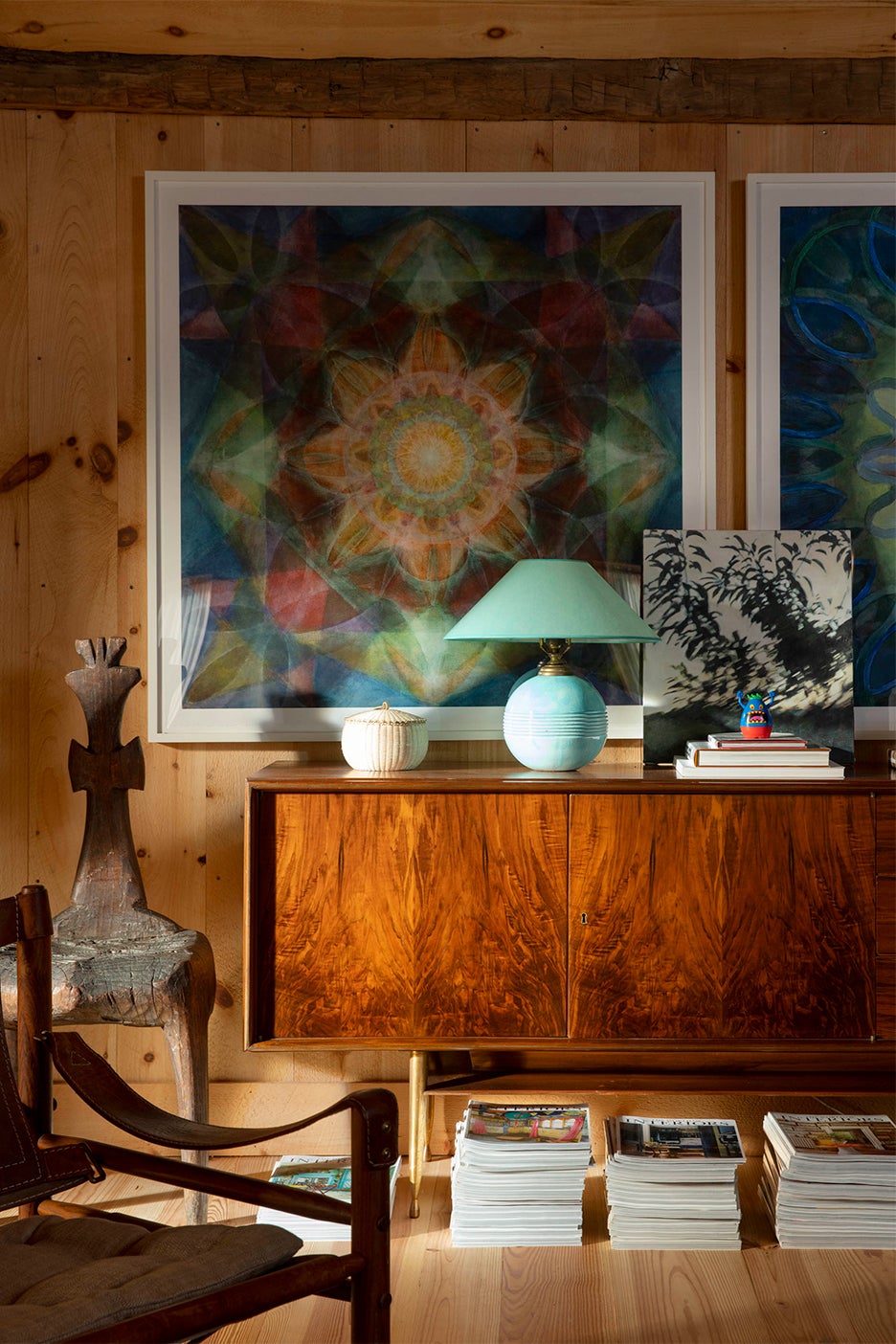 Markham Roberts looked past the squatting bats and squirrels. He ignored the lack of running water and electricity and the fact that the abandoned structure was partially open to the elements. When the interior designer first stepped foot in this Dutchess County, New York, carriage house 14 years ago, he only had his mind on the 1876 Second Empire home across the street; Roberts and his partner, antiques dealer James Sansum, had plans to restore it and turn it into their weekend retreat. This lonely building tacked onto the sale would have to wait its turn.

For nearly a decade, Roberts—whose second book, Notes on Decorating, hits shelves this week—looked out at the carriage house and imagined its potential. “It had the charm of an old barn and the most beautiful weathered paint job on the exterior,” he says. The property’s backstory fascinated him: It was the local hangout of a small-time gangster during Prohibition. “We found many old whiskey bottles when we pulled up the old floorboards,” he remembers. “Sadly, they were all empty.”

When the main house was finally finished five years ago, Roberts gave the second building his full attention. “I wanted a place to work up in the country,” he says. “I needed room to have my design library and storage for all my samples and plans.” Everything had to be rebuilt from scratch: a new foundation, insulated walls, radiant under-floor heating, and an updated roof.

advertisement
“We found many old whiskey bottles when we pulled up the old floorboards. Sadly, they were all empty.”

All that remained were the old barn doors and the dramatic beams lining the walls and ceilings. “I love the way they demarcated the space,” says Roberts, who promptly paneled the interior walls with equally rustic rough-sawed knotty pine. “It smells so good and reminds me of my childhood summer cottage on Lake Michigan.”

Downstairs, Roberts built a ton of under-stair storage for his blueprints, carpet samples, and magazine tear-outs, and covered the floor in polished concrete, a budget-friendly alternative to natural stone. “They look like a beautiful dappled gray horse from a Théodore Géricault painting,” he says. “I love entering through the mudroom. I see my center table and the Carlo Nasson lantern above and I know I am in my space—completely mine. I never was a great sharer as a child and I guess we never really change.”

Most of the original floors were beyond repair, but the designer salvaged just enough planks to cover the stairs leading to the old hayloft, his future open-plan workspace. To bring in much-needed natural light, Roberts had two large windows installed on each end, which he lined with drapes made from various textiles to mimic the red striped embroidery on Ukrainian peasant blouses. “I thought my curtain maker would kill me when I brought in 30 different pieces of fabric and trims,” he says, laughing.

Great rooms are notoriously difficult to decorate, but the designer knew exactly how to give the second-story space a warm, intimate feel. “Clients rarely let me choose so many strong colors, so I took this as an opportunity to play with hues I rarely get to use,” says Roberts. He divided the space into multiple cozy seating areas: a pea green sectional on one side, a teal daybed on the other, and an oversize citrine Milo Baughman chair to round everything out.

Despite all the comfortable hangout spots, Roberts spends most of his time at the round worktable by one of the large windows, enjoying the sunlight streaming in from the new opening. At the other end, a bed covered with a vintage Indian embroidered patchwork quilt is set for visiting family and friends, though the designer mostly uses it to lay out fabrics and work on client schemes. “We’re the only ones who have stayed here so far—just once when the power went out in the main house,” he says.

Two closets filled to bursting with textiles, a kitchenette, and an adjacent bathroom round out the office–slash–guest suite. Roberts covered the latter’s shower walls in inexpensive galvanized metal sheets to complement the pine walls, then punctuated the sloped ceiling with a round rattan pendant light.

The rest of the space celebrates pieces collected over the years, like an 18th-century French metamorphic library table that opens into a miniature staircase, which Roberts bought ages ago but had never found a place for; an 1880 ebonized and painted cabinet; and a handsome Georgian chest of drawers. “It was in my bedroom in Michigan when I was little and later in my bedroom in Boca Grande during my teenage years,” he says. “Now it lives here like a loyal friend.”