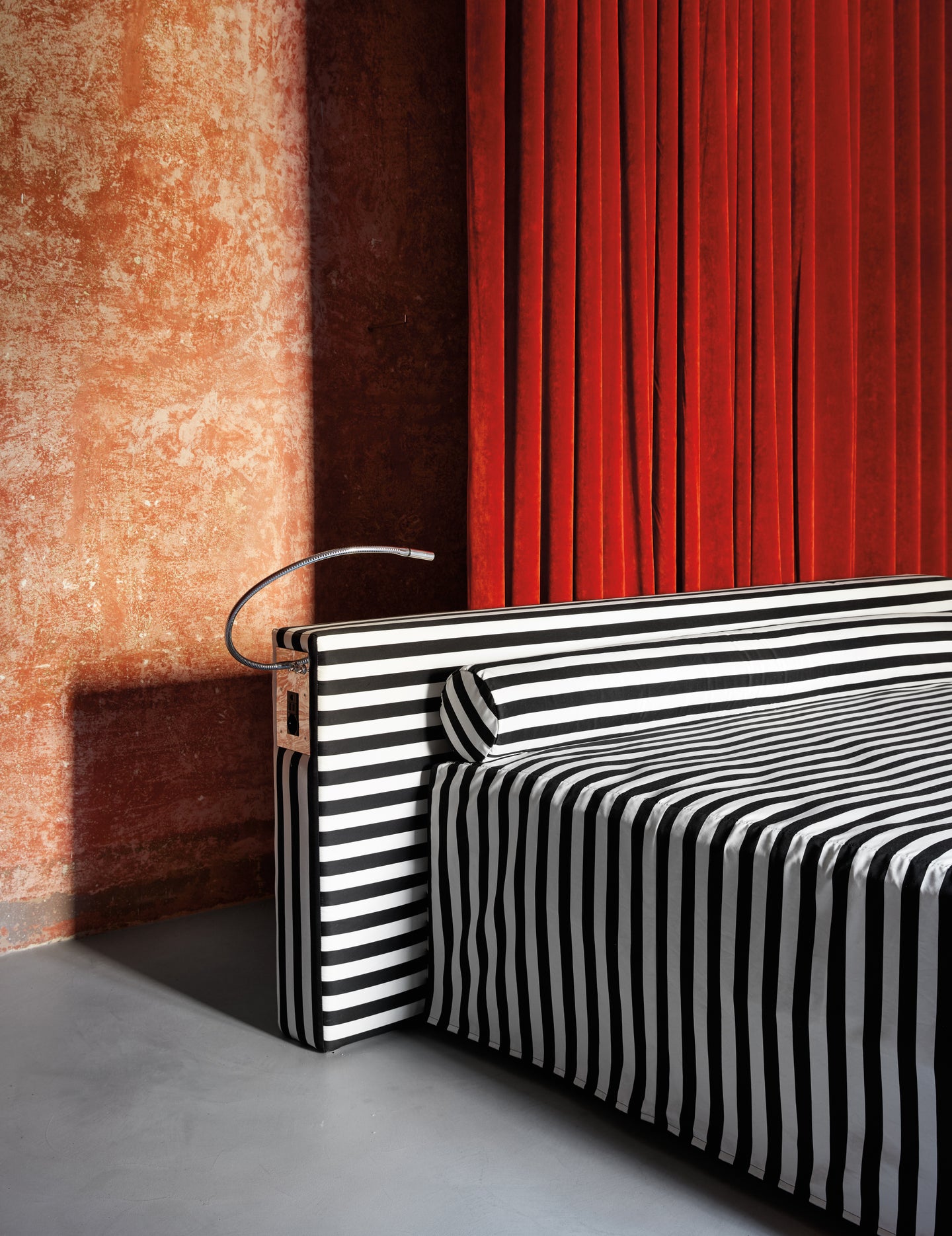 This story originally appeared in the Summer 2019 issue of Domino, titled “A Fine Line.” Subscribe to be the first to receive each issue.

Hidden in the heart of Arezzo, the Tuscan city known for its medieval churches, museums, and sprawling antiques marketplace, is the discreet boutique property Sugar Rooms. To find it, follow the faint glow of a neon sign, turn left down an alleyway, climb a stone staircase—and you’ve arrived.

Inside, another labyrinth awaits: Quiet corridors connect 15 rooms, each revealing a new surprise—heavy velvet drapes replace internal walls; mirrored bathrooms create a dizzying optical illusion; and jewel-toned ottomans contrast with the faded frescoes. The space is both traditional and ultramodern, a hallmark of Roberto Baciocchi, the renowned architect behind Prada’s global stores and a master of reimagining old buildings.

When his team began the restoration process of Sugar Rooms—a mansion dating back to the 1700s that once belonged to the noble Lombardi family and still has original details, like mosaic tiles from the 1st century A.D.—their discoveries informed the look and feel of the hotel. “Every building I work on is different and has a spirit of its own,” says Baciocchi. “The walls themselves suggest the way to intervene.”

Once they removed layer after layer of paint, they found hand-painted frescoes detailing everyday scenery in Arezzo—bell towers, rustic villas, and stone columns—which then guided the color palette of dove grays, sun-faded yellows, and rich terracotta. “There is no break between the interior and the views, so you are fully immersed in the space, as if in a dream,” explains Baciocchi of the visual trick that roots the property firmly in place.

Another design device: the architect’s ability to artfully manipulate light, concealing bulbs behind glass and drapes to emit a warm glow and enhance a fabric’s luster and texture—from Milanese velvet to linen and cotton. That sense of drama continues in the vanity and shower areas, where exposed washbasins, made from a single block of unpolished marble, and curved backlit mirrors could pass for works of art. Despite its many contrasts—ancient yet futuristic, raw and textural but polished and sleek—Sugar Rooms neatly folds into itself like a set of nesting interiors just waiting to be explored.