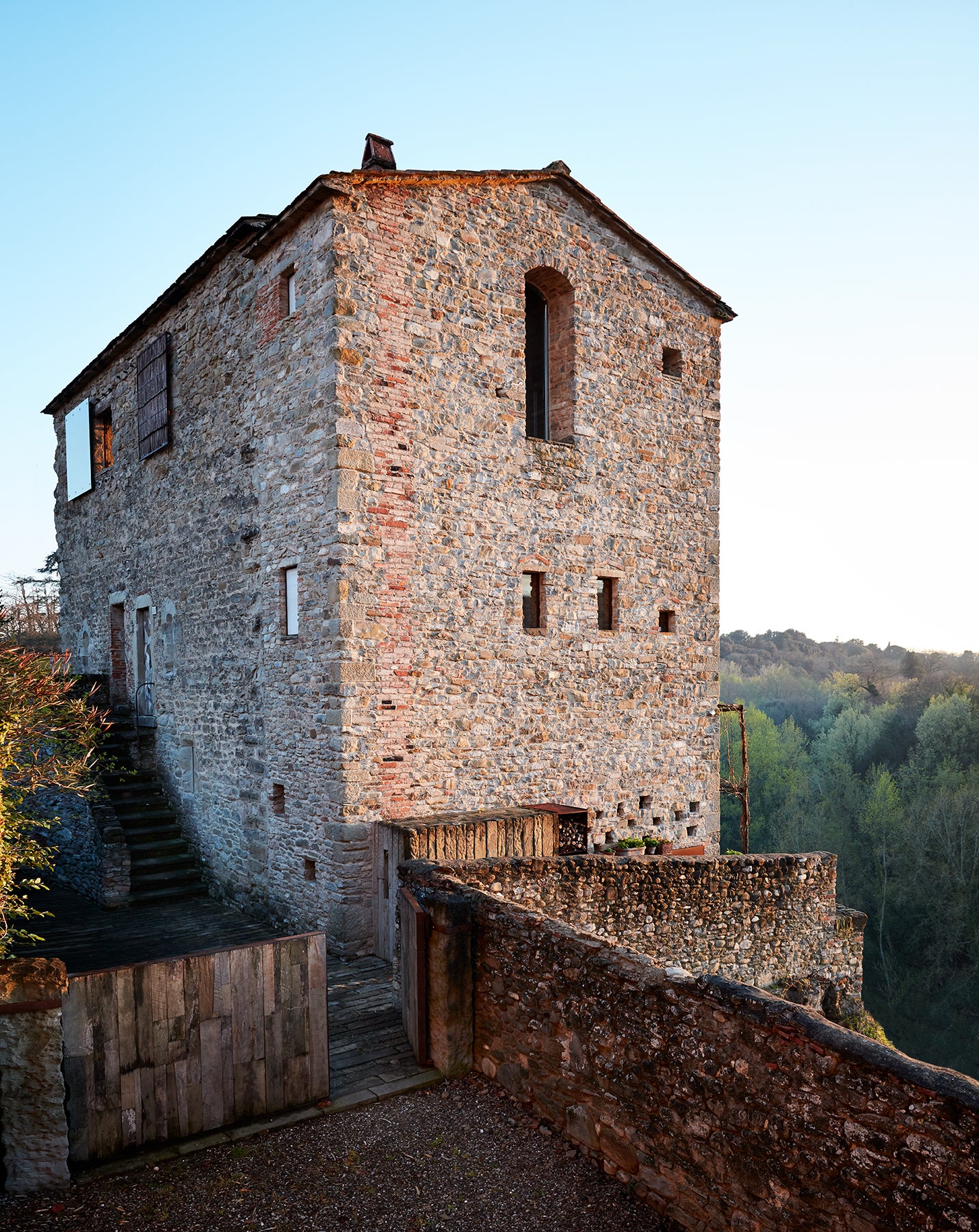 This story originally appeared in the Fall 2019 issue of Domino, titled “Mr. Baciocchi’s World.” Subscribe to be the first to receive each issue.

Roberto Baciocchi loves to defy expectations. He expertly pairs a smoky orange velvet bed with a purple shag rug as if they were easy neutrals, and sports a turquoise leather blazer with zero irony. The architect responsible for the oft-Instagrammed Bar Luce in Milan and Prada stores worldwide—dreamy spaces filled with polished checkerboard marble floors, chrome accents, and bolts of mint and moss green—clearly isn’t afraid to make a statement. So you would expect that his personal spaces would follow suit.

In fact, Baciocchi’s property in his hometown of Arezzo, Tuscany, is the definition of discreet—from the outside, at least. His guesthouse, a former watchtower dating back to the 11th century, quietly blends in with the historic town’s soaring Romanesque churches and impressive Gothic palace. When he first discovered it, the tower was crumbling and all that remained was the original sandstone encasement, complete with arrow-width windows once used by archers. But he saw potential. “The light here is extraordinary and it’s very rare to find a building overlooking the bend in the Arno,” he says, gesturing to the river that can be heard from almost every room in the three-story home. For the extensive restoration of the property—part of a trio of structures that includes his private residence—Baciocchi called on his roster of skilled local craftsmen to create custom fittings and furniture. And much like the man, each design decision resists the rules.

Upon entering the guesthouse, wall-to-wall Siena marble panels conceal a bark-covered stairwell to the (otherwise hidden) lower floor, and every stone in a gravity-defying cantilever staircase is cut to precision so it appears to be floating. Nothing is quite as it seems. But far from a “look don’t touch” experience, the visual trickery and sensory details are meant to be enjoyed and engaged with. Fox fur coverlets, plush rugs, and upholstered furniture soften the stone structure and invite you to kick off your shoes or run your hands along a banister.

“I’m drawn to objects that are rich in history and made by hand, rather than mass produced. I want to see the artisan’s work and the texture of a material,” says Baciocchi as he thumbs an original medieval chisel (he uses it as a box cutter). Mixed in with the centuries-old relics are statement pieces of his own design, such as a squishy raspberry sofa in the downstairs living room and the hand-cast resin sinks in each bathroom. (Select items, like Amazonite cutlery and vases, will be available to purchase for the first time in the United States at Von Koontz Fields, a concept shop slated to open in New York’s Gramercy Park in 2020.)

This obsession with craftsmanship just might be the thread that unites the eclectic space. Terje Ekström Spider chairs look right at home against a backdrop of 1,000-year-old stone walls and ancient coffered ceilings. Eras collide without friction and somehow it all just works. Another unifying design device is velvet, the architect’s material of choice, which he uses to envelop nearly everything, from closet shelves and éclair-like sofas to dining-table tops and bed frames—adding a layer of luster and tactility to surfaces. Light is also revealed and concealed in unexpected ways: Abalone shell tiles in the upstairs bathroom glimmer with specks of turquoise when they catch the hazy Tuscan sun, and bulbs are veiled behind sheets of linen and marble so they emit a soft glow.

Equal parts wit and wonder, the guesthouse is a labyrinth of passageways and hidden doors that reveal a new curiosity around each corner. It’s impossible to uncover every detail in one stay. But then again, you’re not supposed to. According to Baciocchi, “You’re only ever limited by your imagination.” Then, without a word, he turns and disappears up the bark-lined staircase, retreating into the home fashioned from his wildest dreams.

More From Our Fall Issue: Our Newest Artist Crush Takes Us on a Tour of Her Light-Filled Philadelphia Studio We Want to Live in This Textile Designer’s Feng Shui Sanctuary The Historic Resort Giving Us Major Gucci Vibes