How One Designer Turned His Rental Into a Richly Layered Oasis 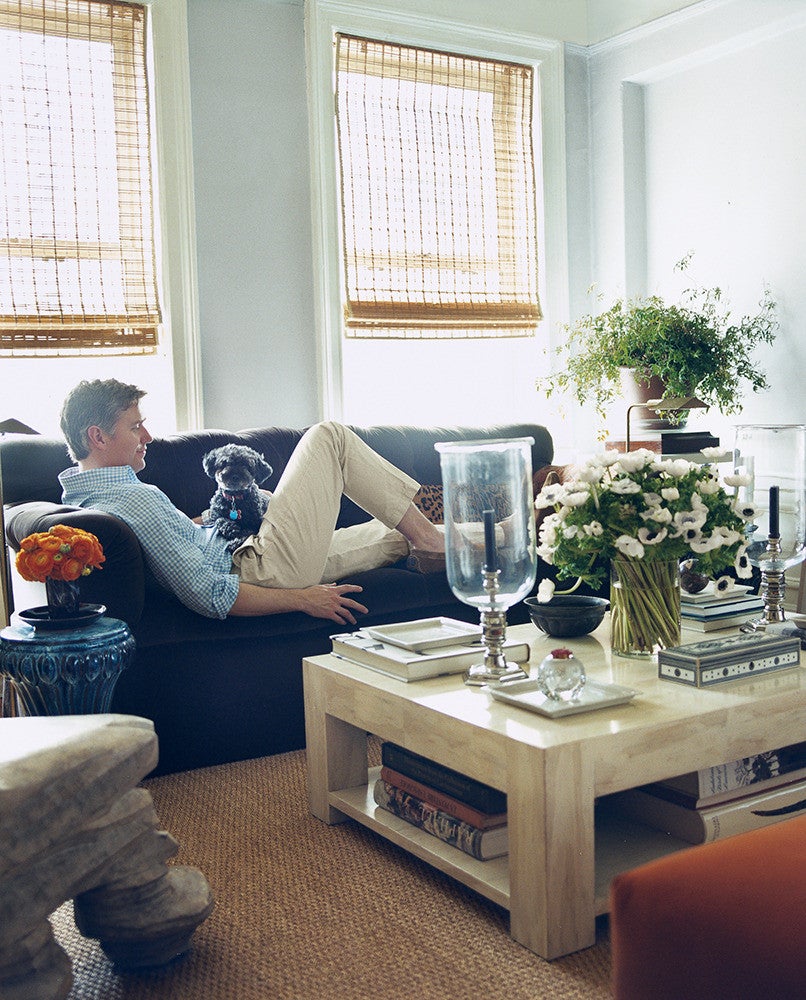 From time to time, we like to dip into the Domino archives and revisit some of our favorite spaces—like the sophisticated rental apartment of Markham Roberts. This story originally appeared in the December/January 2008 issue. Let’s take a look.


Sometimes the biggest design project isn’t starting from scratch—it’s maintaining a fresh, sophisticated environment that you want to live in year after year. Just ask New York interior decorator Markham Roberts, who moved into his two-bedroom during Bush Sr.’s administration and has been adding, subtracting, reupholstering, and sticking to his aesthetic guns ever since.

“It’s hard to find room for everything. Especially in apartments, the key is to stay organized,” says the 40-year-old impresario, who trained under esteemed designer Mark Hampton before going out on his own a decade ago to create opulent interiors from coast to coast.

While his clients typically have ample space, Roberts’s own digs, shared with his partner, antiques dealer James Sansum, and his poodle Choppy, require an eye for economizing. Roberts clearly knows a thing or two about sweeping life’s effluvia under some pretty stunning rugs and textiles, but he maintains that simply feeling at ease guides his domestic credo.“At the end of the day, you want a place that’s calm,” he says. Roberts chose cotton-velvet for the sofa for its sumptuousness, and the sea-grass floor covering for its ruggedness underfoot.

Roberts is a big fan of a little greenery to counterbalance the concrete. He’s more interested in warmth than a design statement, bringing together 19th-century Scottish hall chairs and a large photograph he took himself in the living room.

Ensuring that a room seems airy and relaxed is the first rule in Roberts’ guide to happy habitation. For the living room, he chose a quite blue for the walls, a soft neutral that ushers light through the space and allows him to introduce pieces on a whim.

“I can add a drawing or a pillow without worrying about the walls competing,” he says. To be space-efficient, he had most of the furniture custom-built. Well-designed models can double storage capacity, and Roberts suggests items that translate to multiple locations.

Note the lower shelf or large art books on his duplex coffee table, which is made of wood painted horn white for a lush “ivorylike” veneer. For the long tufted sofa, he chose lightweight cotton-velvet that’s comfortable year-round. “Think about fabric that can go with different seasons,” he advises. Not everything is from the factory. The antique hall chairs, for example, evoke old-time elegance while their spare lines adhere to the overall aesthetic.

Nor does Roberts set out to create a period room. “You want it to feel like your home,” he says. Hence the proliferation of personal touches, from childhood knickknacks to the petrified dinosaur dung atop art books on the coffee table—a conversation piece if there ever was one.

Roberts hand-painted the white feathers in the bedroom hallway, then hung framed mementos—like the color drawing of a jungle he made when he was nine—to enhance the intimacy.

Roberts’ study, converted from the second bedroom, is a lesson in creating a hospitable space with serious intrigue but without massive commitments. he designed the dark trellis-chain-link rug himself and made it reversible in case of a need for a quick change. The rigorous pattern is counterbalanced by a tiger print on the Napoleon III slipper chair-major drama that can be transported to a future address. Ditto the freestanding bookshelves, Anglo-Indian reproductions Roberts bought at British Khaki and had ebonized for a dormant look.

“My mind-set is to spend only on things I can take with me,” he says, though he couldn’t resist grass-cloth wallpaper for its tactile appeal. Wicker storage baskets above the bookcases stylishly corral junk, while propped portraits of the couple speak volumes about the men who read there.

“My job largely entails convincing clients to get rid of stuff,” Roberts says, “but sometimes you have to deal with what’s there.” As a renter, he wasn’t allowed to remodel his

Swathing the wall above the counter in faux-snakeskin wallpaper brilliantly distracts from the unappetizing built-in cabinets.

“I spend too much time in here in the morning to not look at something attractive,” he says. Rarely is something purely decorative, thought. For example, the collapsible wood table that rests in front of the bar (it belonged to his grandparents, who used it on picnics) displays ceramics and flowers, neatly grouped on trays. But the table pitch-hits as a drinks stand for entertaining.

Though the master bedroom had two closets, Roberts needed extra storage when his boyfriend entered the picture. One side of the room is reserved for a long set of drawers he had custom “spray-lacquered” for a glossy sheen. On the other side a wardrobe for hanging clothes is concealed by a vivid 19th century suzani. The thick brocade acts almost as a wall the low queen bed compensates for the narrow confines.

Lacquered eggplant walls provide a regal setting for a heap of textiles: a faux mink blanket on the bed, a goat skin rug, a passed-down lounge chair covered in a muslin slip and draped with a Mongolian lamb blanket, and a silk velvet tiger pillow. “You want furniture that feels good, too,” he says. But it’s not pure indulgence: Heavier, substantial materials also anchor the bric-a-brac that would otherwise suggest clutter.

In the bedroom window sits a multilevel toy roller coaster that Roberts assembled one afternoon.

The soft pale blue of the living room returns to maximize daylight in the bathroom, while a dingy file floor is disguised in

Rather than buy a ready-made shower curtain, Roberts had one stitched from a floral fabric, for old-fashioned polish. Bathrooms tend to be hard to decorate because of the wear and tear on wallpaper, so he dressed the walls with shells in picture frames (unlike photographs, they won’t be damaged by shower steam). A family-relic birdcage and an antique seat constructed of two snowshoes—childhood heirlooms from summer trips to Michigan that Roberts now perches on when giving Choppy her bath—further the nostalgia.