His Paris apartment is full of surprises. 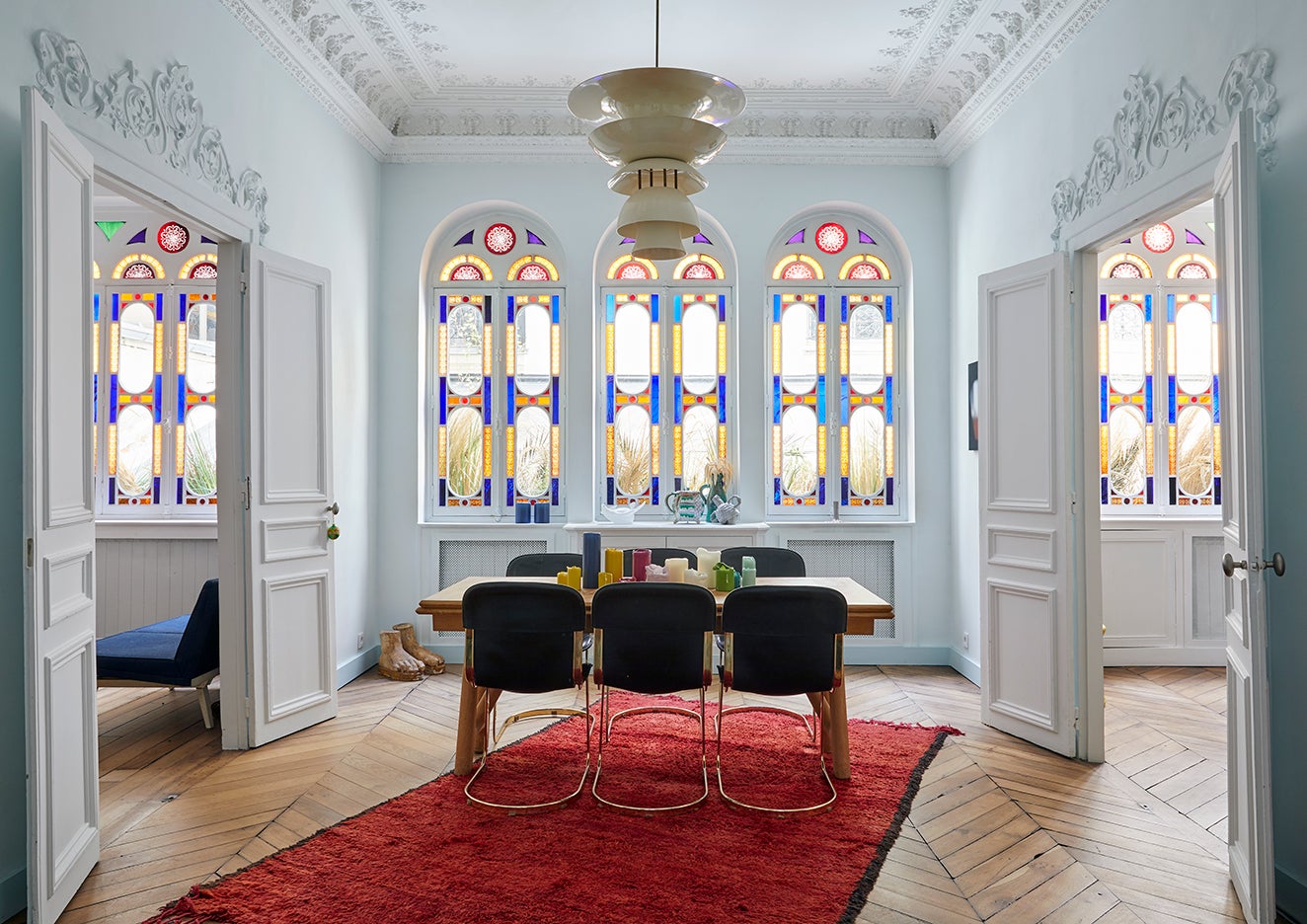 For Jean-Christophe Aumas, there’s only one way to decorate: instinctively and without a plan. The art director’s Paris apartment is an ever-changing laboratory of sorts, with a Yves Klein Blue doorway to the office, a lilac wall in the kitchen, and a sofa in the middle of the living room. “Nothing is permanent,” he says. “I really like the idea of moving furniture around, repainting a wall, and grouping objects in new ways.”

It helps that the space is on the ground floor of an 18th-century hôtel particulier in Pigalle. The cathedral-like ceilings, intricate plaster moldings, and original herringbone parquet floors are what initially charmed Aumas—who headed the visual identity department at Louis Vuitton under Marc Jacobs before starting his own agency, Singular—on his first visit in 2016. “I was impressed by all the stained-glass windows and the little courtyard,” he says. In fact, the glass mosaics would influence the entire palette of vivid blues, burnt reds, and punchy lilacs. “It feels like living in a small garden, which, for Paris, is rare.” It was unique, singular, just like him.

There was just one thing missing: ample natural light, which Aumas addressed by adding a skylight in the heart of the living room and floor-to-ceiling glass doors that open onto the garden. “I wanted to create a ‘little jungle’ and let the greenery spill indoors to let both spaces blend together,” he says of the purposefully overgrown outdoor space and adjoining houseplant collection.

Everything else fell together naturally—constructing memorable moments is Aumas’s job, after all. (Through his work, he’s produced window displays, set designs, and special event spaces for such brands as Cartier, Diptyque, and Maison Kitsuné.) After designing the cobalt-tinted mirror that hangs above the fireplace, he was inspired to keep the hue going, painting a vertical block of French blue that begins inside the mantel and runs all the way to the ceiling.

In the kitchen Aumas wanted to blend his love for Brutalism with his memories of vacationing on the Italian island of Procida, so he paired concrete countertops—a nod to his favorite building, the Barbican in London—with a lavender wall color that reminded him of Mediterranean summers. (Aumas also grew up near the sea in Aix-en-Provence, where the shade is omnipresent.) To add even more contrast between the rough and smooth surfaces, he reimagined wood from the renovation as cabinets and left them raw, simply treating them with a matte varnish.

The coastal European vibe is also present in the bathroom, where terracotta tile sourced from an old shop in Siracusa, Sicily, is laid in graphic stripes. Aumas painted the top half of the shower wall in a dusty pink to make what he calls a shower capsule and swapped a traditional glass door with a decorative cinder block–esque partition.

While most people would categorize this apartment as bold, it’s practically minimalist compared to Aumas’s previous loft, which was painted floor to ceiling in bright shades. “This time, I wanted to work with just a touch of color in each room,” he says. The library got a bit of cobalt around the archway and above the radiator to match the Moroccan rug Aumas picked up in Tangier. In the bedroom, a built-in bookcase framed in sky blue pops against the white walls.

But perhaps the most eye-grabbing space is the one devoid of any geometric paint treatment. The dining room, with its sweeping ceilings and plaster moldings, is bathed in a blue so pale it’s nearly white, giving the space an almost divine feel. Only a crimson Moroccan rug breaks up the scheme to anchor the dining table.

“I wanted to create a ‘little jungle’ and let the greenery spill indoors to let both spaces blend together.”

Furnishings collected from around the world are what make this home so personal to Aumas: a pair of Carlo Scarpa chairs, a collection of vintage ’50s ceramics, and a Lara Feldman painting bought in Cape Town to name just a few. His favorite piece, however, is the one that reigns over it all: “I sit in my Vincenzo de Cotiis sofa and I can see almost everything in my house.”