How One Designer Turned Her Rental Into a Color-Charged Oasis

Now, this is how you decorate with pink as an adult. 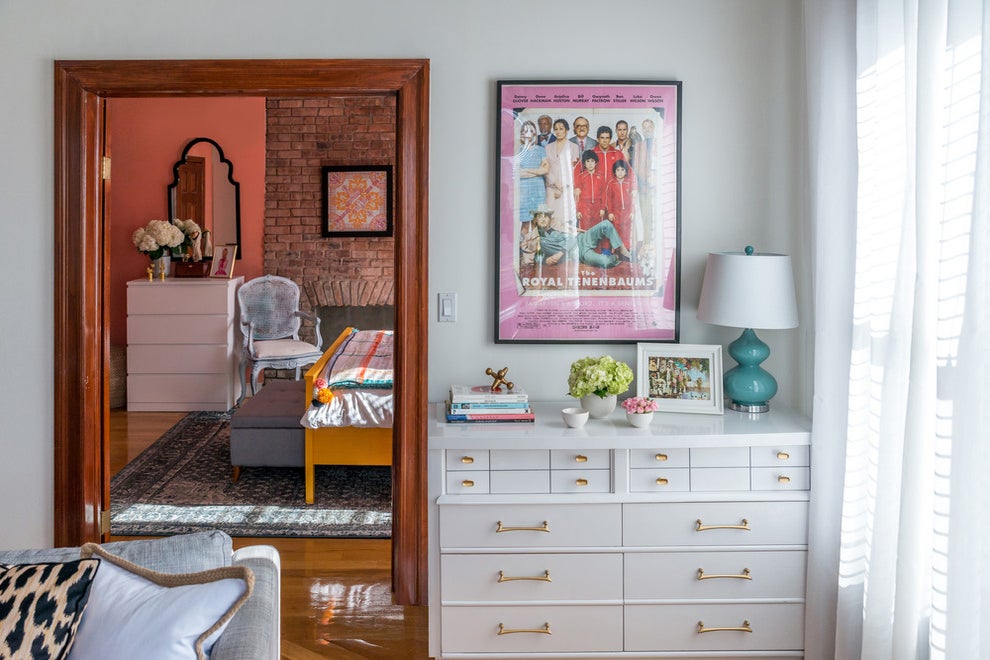 It’s true that a completely whitewashed bedroom has a certain calming effect, and it’s a trend we will continue to stand by for its inherent simplicity and palette cleansing power. It’s only when we see an amazing, color-charged dwelling—say, one swathed in a punchy salmon pink—that we’re instantly reminded of how a singular hue can transform a space for the better.

“I’m a huge fan of color. And a lot of people do shy away from it,” remarks Texas-born designer Lauren Wills. Now a seasoned New Yorker (she came to the city 15 years ago to pursue a BFA in interior design at Pratt), Wills is no stranger to the city’s less-than-ideal apartment scene. After bouncing from one dark and dingy ground-floor unit to another, she decided it was time to (literally) move on up. An airy, 1,000-square-foot apartment in Brooklyn’s Fort Greene neighborhood proved to be the perfect spot to call home. A bonus loft area which would eventually double as the hub for her business, Wills Design Associates, sealed the deal.

“I just loved the light,” recalls Wills. “It’s a corner unit so there are windows everywhere. It was a nice change from having starck little basement apartments.”

Though it may not be her “forever home,” Wills set out to accomplish what most renters only dream of: a place that felt unquestionably her own. “Being that it was my own space I felt like I could take the liberties I wanted to. I’m a huge Wes Anderson fan, so I looked at a lot of his set designs and drew inspiration from there,” says the designer.

If the whimsical splashes of pastel pinks and muted blues don’t instantly scream Wes Anderson, The Royal Tenenbaums poster hanging in the living room serves as a direct footnote.

It goes without saying that it was the apartment’s quinnessential Brooklyn character—note the impressive brick fireplace, sundrenched windows, and rich wood trim—that ultimately won Wills over. That said, charm alone wasn’t enough to overlook some of the dire cosmetic changes that needed to be made.

“I think I probably painted every surface in there except for the ceiling and my living room,” she says. “I did the living room in a flat, chalky white which made all the difference. It looks like a totally different apartment.”

In addition to swapping out a dated glass light fixture in the kitchen for a sunny yellow pendant, Wills took some artistic liberties of her own; putting her side hustle as a amateur painter to the ultimate test.

“I started painting when I was in high school and it was actually my painting portfolio that got me into Pratt,” explains Wills. “I love painting, but I don’t have a lot of time to do it so I thought, ‘What better place to do it than my bathroom!’.”

Inspired by a De Gournay wallpaper print she saw on Pinterest, in a way, the cheerful landscape scene seems to channel the same splendor one can only found between the pages of an illustrated children’s book—but with a sophisticated, adult-approved twist.

Ask anyone who works from home full-time, and they’ll likely tell you how challenging it is to maintain a healthy work/life balance when the two are inherently intertwined. Armed with the knowledge that she would be running her design firm from her apartment, having a dedicated space where she could get down to business was high on Wills’s must-have list.

“My business card and the colors on my website are kind of a minty color (that and pink are by far my two favorite colors). My goal was to brand my office so it did feel separate from my apartment,” suggests the designer. “ The pop of paint in the skylight was to give myself something fun.”

In keeping with the same fun-loving spirit bestowed by the painted skylight, the master bathroom and bedroom also rep various iterations of the intense hue.

A well-hung gallery wall is almost always guaranteed to put a smile on our face—and this inspired creation certainly does not disappoint. “You know, I’ve never felt really confident in my ability to put a

together,” admits Wills. With a little digital help, however, Wills was able to fearlessly, and effortlessly, craft a dreamy display.

“I first decided that I wanted the longhorn to be the focal point—being from Texas I wanted to bring in a little of that. I took a picture of the bench and the blank wall and put it in Keynote and put all the art in there and just played with the sizes. Then I had everything printed and framed and threw it up on the wall.”

Once a small-space dweller, always a small-space dweller. Though the two vintage-inspired side tables that now double as an ultra-chic coffee table alternative were only intended to serve as a brief fix, Wills quickly realized how nice it actually was not having a bulky barrier dividing the middle of the room.

“I actually had those in my last apartment and I thought I would just move with them and have them temporarily until I got a bigger coffee table because this apartment is just so much larger than my last one,” says the designer. “But when I moved in and put everything together, they just kind of worked. I liked not having something super heavy right there to take on more clutter because I feel like coffee tables tend to be a good dumping ground for things.”

Despite the fact that the apartment is constantly flooded with natural light and boasts not one, but two, fireplaces, the space still bears many of the quirky and unconventional elements that have long placed NYC apartments into a peculiar league of their own. But if you ask us, a teeny tiny kitchen or semi-awkward floor plan is the key to staying humble.