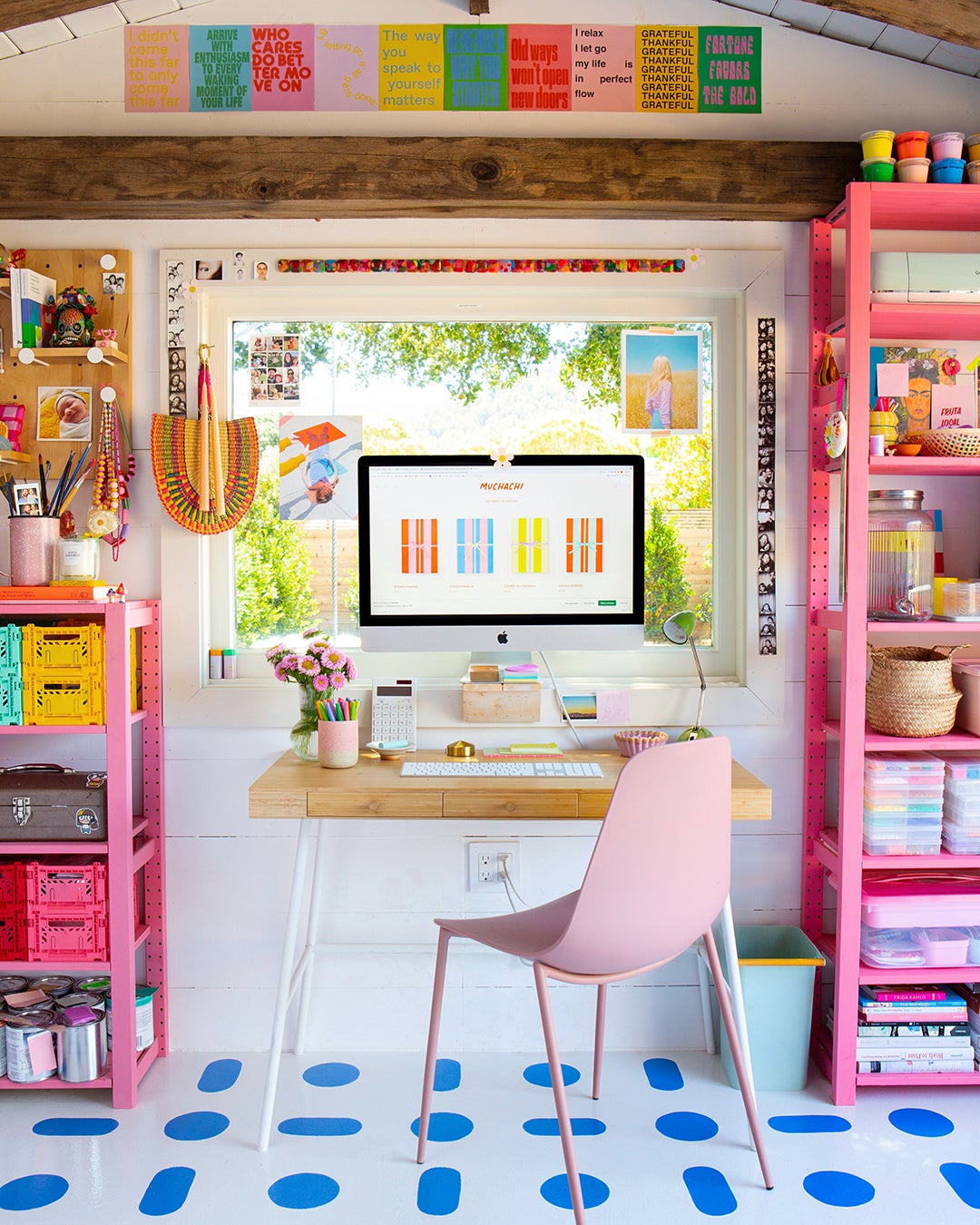 Muchachi Studio founder Andrea Ramirez learned how to play again when her daughter, Emilia, turned 3 years old. “She’s taught me so much,” says the San Francisco–based graphic designer. “She was full of imagination and would have conversations with her dolls. I was like, ‘I miss that.’” Now two years later, Ramirez looks at her work through Emilia’s lens. In addition to creating colorful, modern wrapping paper (Ramirez’s online shop just launched last Friday), she also makes tree ornaments using vintage beads. “I want to have fun and see what comes out of it,” she says. “This is my job, but I’m also going to enjoy it.”

Erected around an old pergola in her backyard, the office-slash-crafting zone Ramirez and her construction-savvy husband, Anthony, built from the ground up is her personal and professional playground. Inside, hot pink and bright orange open shelves are stocked with paint pigments; Land of Nod pegboards display small treasures; and photo booth pictures frame the window. Emilia was involved every step of the way—paintbrush in hand—because it’s where she can go to be creative, too. “Sometimes we blast the music and dance when we are crafting, or it’s a great time to have a real chat with her,” says Ramirez. Here are four key ideas we’re taking away from the bold WFH space.

With Katy Perry spinning on the record player in the background, Emilia helped her mom paint the Candyland-worthy pink-and-red–striped accent wall. Ramirez learned to let go of the fact that her 5-year-old would most likely color outside of the blue painter’s tape—any big mistakes could easily be fixed with another coat or two. “I want to teach her what my mom taught me, which is that it’s about creating memories,” says Ramirez.

Ramirez said so long to the gray concrete slab floor with a graphic blue and white design inspired by Talavera tile patterns seen in Puebla, Mexico. She perfected the shapes by cutting stencils out of cardboard and tracing the silhouettes on a clean white surface.

IKEA Storage So Nice, She Painted It Twice

IKEA’s Ivar shelving units are as plain as it gets, but all it took was a bold paint choice (bright orange and bubblegum pink) for Ramirez to make the piece her own. The wider, lower version is especially handy for storing art and paper goods that need to lay flat (Ramirez uses the spot to hold gift wrap). The open system is key to crafting. “If I can’t see what I have, I can’t get inspired,” she notes. It also allows Emilia to grab things while her mom is working on her own projects. “She knows all the tapes are in the little basket,” adds Ramirez.

Instead of stocking up on plastic boxes at the Container Store, Ramirez reuses takeout ketchup holders and Emilia’s old snack bins to separate her tiniest materials by hue. “They’re all clear, so I can see everything clearly,” she says. Mixing up the style and color of her organizers—she uses everything from Hay’s collapsible bins to toolboxes—lets her find things quickly without sorting through a million different white-lidded containers.

Carve Out a Corner for Little Ones

While Emilia has access to plenty of Ramirez’s craft supplies, she’s got her own box when it comes to beads. Having a designated collection instills a sense of pride, and it makes Ramirez happy to know that she won’t have to re-sort her own beads at the end of each day. “She also has her own glue, crayons, and scissors,” notes Ramirez. Recently Emilia painted shells and put them in small plastic bags so she can sell them at the Renegade Craft Fair. “She’s a little entrepreneur,” says the proud mom.