How a DIY Pro Crafted the Perfect Personalized Nursery

Lessons to steal from Erica Domesek. 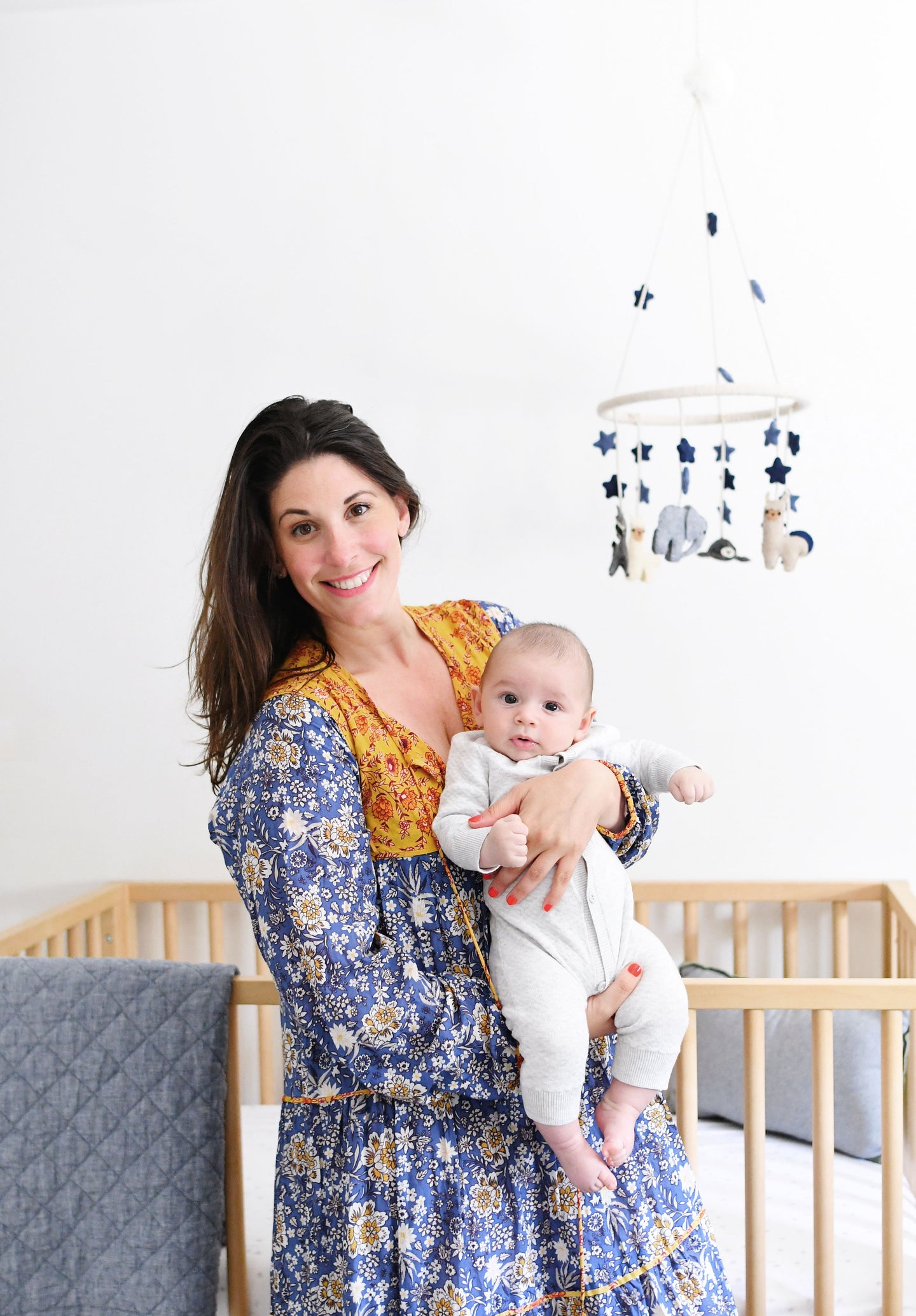 The first lesson design expert Erica Domesek learned about being a parent? “Learn to let go of the small stuff because everything always eventually falls into place,” she says.

This particular adage rang especially true when it came time for Domesek—the founder of DIY blog P.S. I Made This—to create a space for her son, Wylie. She wanted to transform what used to formally be a third bedroom (informally, a second closet with a daybed for their cat, Raj) into a nursery. After extensive mood boards and makeovers, she put the finishing touches on the nursery after Wylie was born. The task challenged Domesek’s self-described Type-A tendencies, but it paid off in the end.

It began with a crib from Pottery Barn Kids’ Modern Baby collection. Domesek says it was the perfect neutral anchor to kick off the design and began layering in other colors and textures in calming hues. The aim: to create something soft and airy that didn’t feel too babyish. “The neutral palette unfolded the second I found out it was a boy,” says the blogger. “I had a totally different idea in my mind if it was a girl, with hunter greens and botanicals. I’ve always had an adverse reaction to cheesy baby things, so creating a space that was simply a beautiful room was the goal.”

That color palette, coupled with the fact that she knew the space had to grow with Wylie, made for an ultimately sophisticated nursery infused with sweet accents. With larger neutral, timeless pieces—like a changing table and plush armchair from ducduc—to set the scene, the blogger layered in youthful elements through the decor. From a woven mobile to a sentimental gallery wall, Domesek’s thoughtful touches reign supreme. Of course, given the nature of her expertise, the nursery is also full of fun DIYs, so we felt it necessary to tap the pro and get intel on how to create a crafty space. Here’s what she had to say.

Wylie’s room is brimming with personal mementos, and the scope of the projects is proof that sometimes the most thoughtful touches are the simplest. “When it comes to getting creative, remember that you don’t have to break the bank. Use existing things around the house that have special meaning to frame,” says Domesek, pointing to the art wall next to the changing table as one her of her favorite parts of the nursery. It includes an illustration from a Valentine’s Day card she gave her husband when they first started dating, her favorite page from John Derian’s coffee table book, and the hospital band from when Wylie was born.

On the higher-lift end of the spectrum is the felt mobile, which Domesek made herself and is a small touch that brings warmth to the room. “It took way too long to complete, but in the end, it was totally worth it,” she says. Pick your DIYs carefully, remembering that a small decorative touch is just as thoughtful as a bespoke dresser.

While longevity is definitely something to keep in mind when designing a nursery, there are some temporary updates you can make to swap out as your kid grows up. One of Domesek’s favorites is wallpaper. “Wallpaper is definitely the new paint,” she says. “I love the idea of using removable wallpaper tiles that are easy to apply yourself.” Don’t give up on your dreams of a pattern-heavy nursery; just be sure they’re something that can be updated in an affordable manner. Temporary wallpaper is a great solution to this, as you can use it to bring pops of print to furniture, backsplashes, and even ceilings without much risk.

advertisement
“When it comes to getting creative, remember that you don’t have to break the bank.”

Many people don’t have an empty bedroom lying around, waiting to be officially ordained as a nursery. If you’re repurposing another room—in this case, Wylie’s nursery used to be a storage room-slash-closet—try reconfiguring what’s there instead of ripping everything out and starting fresh. Domesek converted the built-in bookcase into a storage closet, with the help of some new wallpaper and added shelving. “I customized with door pulls that I found on my babymoon in Barcelona at Zara Home and bottle cabinet edge pulls from Emtek,” she says.

“Wallpaper is definitely the new paint.”

Cut yourself some slack

“When you are ready to pop out a baby, it’s not the best time to start hanging wallpaper and customizing a built-in storage unit, but if you know me, you know I wouldn’t have let anyone else do it,” says Domesek, who undertook the bulk of the DIY updates when she was seven and a half months pregnant. Even if you’re a crafting pro, it’s okay to outsource help for bigger undertakings, like wallpaper or paint jobs. The process of creating a room for your little one should be an enjoyable one, after all, so don’t add extra stress by putting too much on your plate.

See more nurseries we love: Christene Barberich’s New Baby’s Nursery Is a Technicolor Dream There’s Nothing Cliche About This Cool, Celestial Nursery Of Course, Leanne Ford’s Baby Has the Coolest Nursery in LA