It has all-ages appeal. 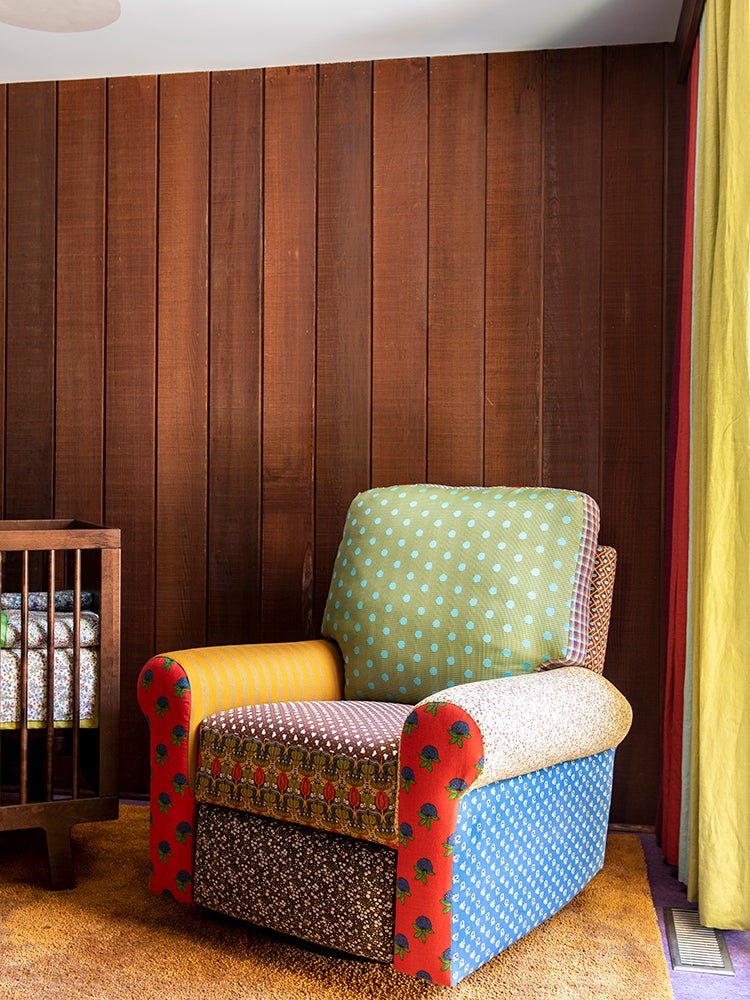 Ask Los Angeles vintage boutique owner Brynn Jones about the overhaul (completed with Frances Merrill of Reath Design) of the mid-century Hollywood Hills home she shares with husband Ness Saban, and she’d say they saved the best for last: the guest room’s transformation into a nursery for their now 6-month-old son, Odin. Their design M.O.? “It was basically an anything-goes approach,” says Jones. Especially when it came to the palette. The result is a whimsical explosion of color and pattern with, unsurprisingly, plenty of vintage touches woven throughout. The space fosters a sense of wonder in children and adults alike—and there is plenty of design inspiration to go around. We spotlight our five favorite ideas, below.

Make a Sensible Piece Stand Out

Any new parent can attest that a comfortable glider chair will get a lot of mileage in a nursery, but, aesthetically speaking, they often leave a lot to be desired. Merrill had a genius idea that ended up turning a Pottery Barn glider into the room’s piéce de rèsistance: Make the chair into a 3-D quilt. Jones, who had already squirreled away scores of fabric swatches to have someone make a quilt for Odin, was game. “When you’re ready to cover the chair, test out different configurations until you find something that feels right,” she says. Once you’ve landed on a winner, snap photos to document and bring them to an upholsterer, who can do all that stitching for you.

Traditional rules about color pairings don’t interest Jones. For an effect that’s fun and eye-popping in equal measure, she avoids solo color stories—“I always try to stay away from too much of the same shade,” she adds—and offsets brights with what the new mom calls “weird neutrals.” A perfect example: the combination of purple linoleum floors and the spongy carpet with grayish blue (aka weird neutral) tips. “I feel like the less things match, the more they go together,” Jones explains. “If you’re going to mismatch, you’ve got to really be all in.”

When it was a guest room, the closet was a catchall—or, as Jones calls it, a “black hole”—for all the “coats and random things we never used.” So when reimagining the space for Odin, she considered how it would actually be lived in. “Odin didn’t need a big closet, but he did need a dresser and changing table,” notes Jones. Her solution was to remove the closet completely and add a custom built-in into the nook (with the help of G&A Fine Wood Working). “I always try to turn the most useless space into something functional or cute—or both for that matter!” she adds.

Don’t Shy Away From Bold Patterns

Jones, a longtime collector of vintage fabrics (she sources them from flea markets, thrift stores, Etsy, and eBay), is all for embracing—and exuberantly mixing—patterns. “Going pattern heavy in your home can be intimidating, but I say just do it. Your space will feel really fun and unique,” she says. Into the motley assortment of vintage patterns, Jones added a dinosaur design by House of Hackney and a number of Liberty London prints. Her best advice? “Keep patterns that are similar away from each other.”

Color can come in many forms. To wit, Jones used the ceiling as a chance to incorporate another hue. Taking her cues from a picture of a 1970s-era kid’s room with painted clouds, she tasked Londubh Studios to do the same, using an ashy powder blue for the sky and a light, silvery gray for the clouds—“so it wasn’t too bright or too contrast-y.” And the book wall, while highly functional, was also another unexpected showcase for color: The acrylic wall shelves frame a rainbow of colorful children’s books.

See more nursery tours: Christene Barberich’s Nursery Includes a Technicolor IKEA Hack When Justina Blakeney Is Your Friend, You Get the Coolest Nursery A Cool, Contemporary Nursery That’s Not Afraid of a Little Neon