When Justina Blakeney Is Your Friend, You Get the Coolest Nursery

This sweet space is proof. 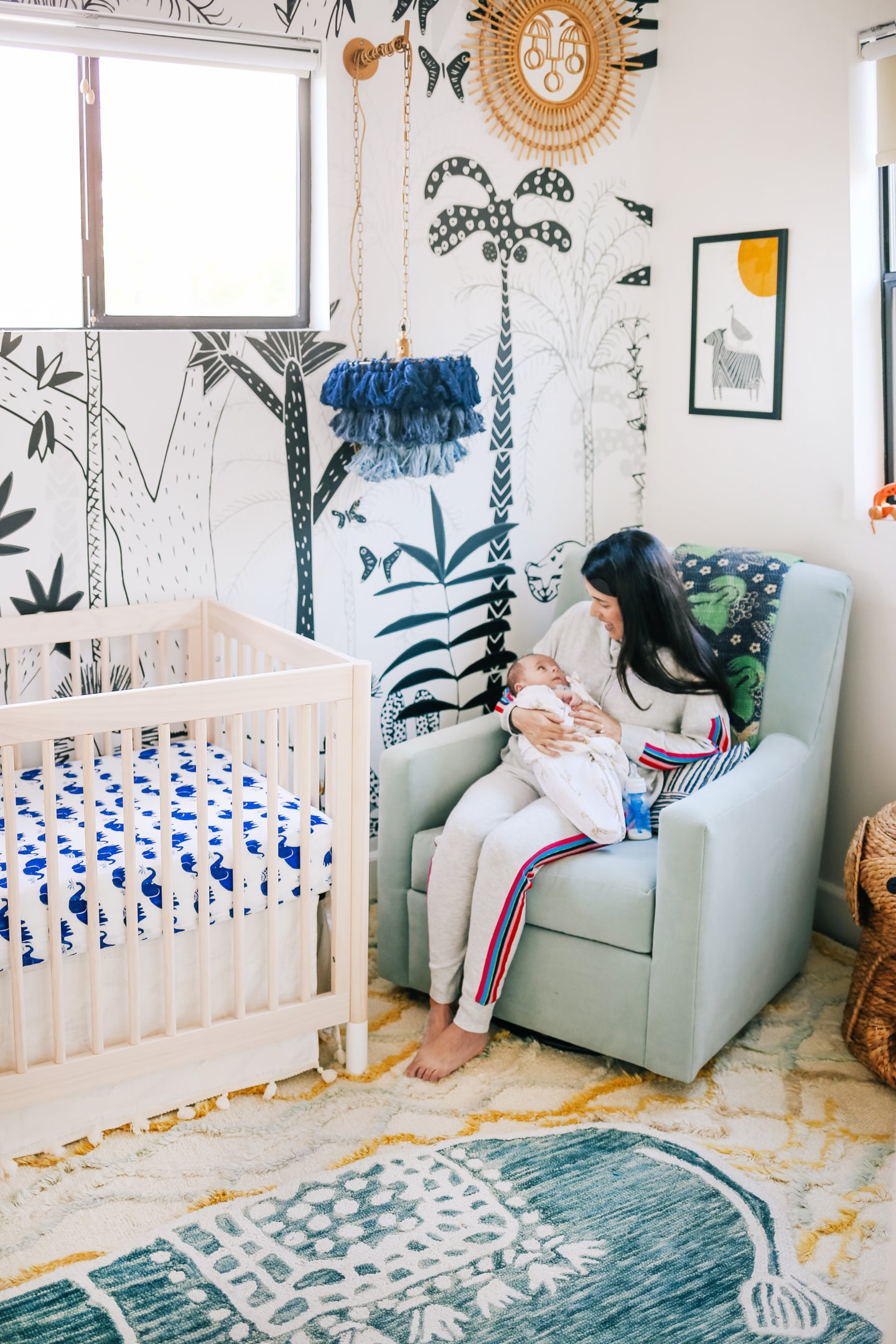 When you hang around Justina Blakeney, you’re in for a world of constant design inspiration. Kim Muroff, her friend and agent, got particularly lucky: Blakeney designed a dreamy, jungle-inspired nursery for her son, Chase. The 10×11 room has a personality that defies its size, with vibrant pops of color and playful patterns adorning every corner.

“Kim told me she wanted a jungle theme for the nursery, which, of course, is totally up my alley, but since Kim’s style is ‘quieter’ than mine, I tried to bring in a lot of personality without making it feel too maximal or over the top,” explains Blakeney. “I like to call this style ‘jungalus miminus’ instead of ‘jungalus maximus’.”

Bright whites anchor the space, while aqua and yellow accents take over as the predominant color scheme. From a navy fringe pendant light to a water hyacinth–woven elephant laundry hamper, hints of the designer’s signature bohemian style shine throughout. The star of the show has to be the black-and-white mural, which is actually an old design Blakeney had made for a children’s collection, but since this particular mural never made it into the final collection, she found a way to repurpose it here.

“I fell in love with the artwork for this mural the moment I saw it, and it was the first thing I thought of when I was thinking about my nursery design,” says Muroff. “The most meaningful part of the space is really that Justina designed it. She also created the artwork for my ketubah (Jewish marriage contract), so her designs have now been a part of two major life milestones of mine.”

Their friendship is evident in the keen attention to detail and sweet touches throughout this stylish nursery. That said, not everyone has a designer BFF who can help transform a tiny room into something dreamy. We tapped Blakeney to get her top tips on making a small nursery feel bigger.

Use color to your advantage

Here, the main color palette was graphic black and white, with splashes of yellow and aqua peppered in. While you don’t necessarily have to have every item in your nursery adhere to the dictated color scheme—a few outliers, like the coral pink artwork, add dimension—try keeping the majority of the pieces uniform. “Keeping the colors cohesive meant that we could combine lots of patterns without making the small room too busy,” says Blakeney.

Use the right furniture

Proportion, proportion, proportion. “Find a petite dresser or items that are tall but not wide,” says Blakeney, pointing to the little toy tower used as a storage unit of sorts. Since every furniture piece counts (even more so in a small space), it’s important to pick them with scale in mind. And don’t clutter a nursery with too many small items: “Leave some breathing room between pieces so it doesn’t feel cluttered,” continues the designer.

Once you’ve determined the color scheme and furniture scale that works in your tiny nursery, you’ll likely want to stick with it. The key is to opt for pieces that can grow with your little one so you don’t have to reconfigure the space for every birthday. Here, the dresser currently employed as a changing table can go back to being a regular dresser once the diaper phase is over. The crib converts into a toddler bed, making it one piece Muroff won’t have to worry about updating for quite a while. “The mural, being [that it’s] in black in white, feels sophisticated enough to grow with Chase for years to come,” says Blakeney of the nursery’s artistic focal point.

“Keeping the colors cohesive meant that we could combine lots of patterns without making the small room too busy.”

Draw the eye up

Look for ways to heighten the room; if your nursery doesn’t have particularly tall ceilings, this means resorting to visual trickery. Here, the intricate mural behind the crib goes well beyond the window, lengthening the wall. Blakeney also hung a series of small mirrors higher up on the wall. “This makes the ceilings feel really tall,” she says.

While it’s a small space trope that white paint can cure any tiny home, this doesn’t necessarily mean you have to sacrifice color or pattern. Instead, look to the source of natural light to brighten a space and emphasize it. “Abundance of natural light and mirrors can make spaces feel bigger,” recommends Blakeney. “Using window treatments that don’t block light when they’re open and hanging multiple mirrors that reflect light can help.” Opt for lightweight linen curtains rather than heavier drapes.

See more sweet nurseries we love: A Cool, Contemporary Nursery That’s Not Afraid of a Little Neon How a DIY Pro Crafted the Perfect Personalized Nursery There’s Nothing Cliche About This Cool, Celestial Nursery